The Luddites were 19th-century English textile workers who protested against the machines developed during the period of industrial revolution, which were replacing their artisan textile manufacturing with factory manufacturing. The artisans skilled labour was no longer needed, less skilled machine workers could do the work for less pay. The spinning frames, the power looms, the flying shuttle, new machines changing the shape of the textile world.

The Luddite story is not a simple one

The Industrial Revolution and the British Empire, served the masters in society. It made the rich richer but allowed the continuation of oppression of the poor.

The turn of the 19th century was not a happy time for the poor in society. Against a backdrop of continuing war with France and the pervading climate and fear of the revolution in France, could the same happen in Britain? The poor were suppressed, there was a very real fear that an educated, informed public would become difficult to handle and any sign of insurgency was dealt with swiftly.

There were many signs of discontentment in society, caused by a wide range of things

The actions of the Luddites

The movement was begun in the area of Nottingham in 1811 when a group of discontented textile workers met and decided to take physical action against their loss of work, low wages and poor working conditions. Using the pseudonym ‘King Ludd’ they began a course of civil disobedience and disturbance. They threatened factory bosses, merchants, magistrates, anyone who stood against them. They sabotaged machinary, breaking into premises and smashing machines to bits.

The British Government sent in the troops to control the Luddites

The Government followed it up with the Frame Breaking Act of 1812 which made the breaking of machines a capital felony. They held a mass trial of those caught in 1813 and executed 17 men, others were sent to penal colonies. These were show trials and sat uncomfortably with some politicians, an air of panic had settled in Government. The harsh punishments meted out did stop the Luddite protests, in all between 60 and 70 people were executed. This was a very large stick with which to beat people who were desperate. 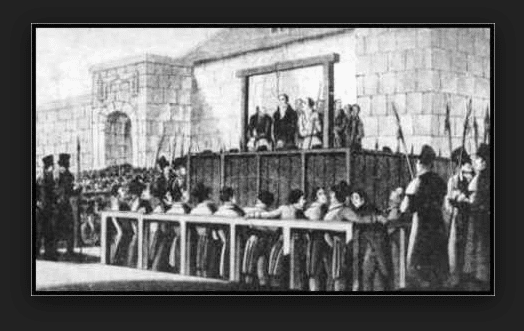 The Trial at york

What do we know about the hand loom weavers?

Luddites, the consequences of their actions

The Luddites could not stem the tide of the machines, if indeed that had been their goal. They brought attention to the poor in society and the shocking conditions in which they existed. Luddites wanted a fairer society, they did not achieve it. The first half of the 19th century was a time of very real hardship for people. It took another twenty years before any type of reform took place.