The Battle of Waterloo 1815 was won, but what happened after Waterloo?

The landless poor, began years of struggle. Poor men, rich men, all prospered from the wars with France but when it ended, the fall force of the depression that washed out in its wake, could not help but sweep the landless poor with it. The rich who had been able to share out their profits from the war, with the poor, found themselves in post wars sucked into the same depression. When rents and prices fell, the rich had to choose, did they reduce their own standards of living or did they allow the poor to suffer?

But why did prices fall after the war?

Prices began to fall even before the war ended. When it was all finished, governments no longer had to feed their armies, European and American grain ports opened and the price of grain plummeted. The harvests of 1813 and 1814 were bumper harvests and the European market was flooded with grain. Many farmers during the war, had brought lands, with thin and poor soil,  into production. After the war this land no longer needed to be farmed and farmers were left  with no return on their investments. The value of farming stock fell by 50%. The spiral downwards continued, farmers were unable to pay their rent nor repay interest on loans and mortgages they had taken out in the war years. The banks called in the money.

It was not just the tenant farmer that felt the brunt of the decline. The landowners too were caught in the midst of the crisis. Rents had had to tumble or the land had to be left barren and un-worked. Both measures spoke of both personal and national ruin.

It was to parliament the landowners turned. How could they raise prices using legislation? The Corn Laws which had been in existence for a long while, had prevented the export of corn in times of domestic shortage. It was decided that what was required was more home grown corn, even if it meant tilling unproductive land. The population were told it was better to pay more for grain and bread now, than to suffer possible shortages in the future. If England were to feed itself, it could not rely on foreign corn. People would have to pay more for their corn.

Workers had dreamed of a cheap loaf, manufacturers seeking cheap sales abroad, based on cheap labour at home, were up in arms. Petitions thumped on the desks of those in the House of Commons. 24,000 signed in Leeds, 40,000 in Bristol, 50,000 in Liverpool, 50,000 in Manchester. Nevertheless the Corn Laws were promoted and a bill was passed, excluding foreign corn imports until the price of home grown corn reached 80s a quarter.

The farmers and landowners who had done well out of the wars with France, now wished to do so in peace and blast the poor peasants for opposing them. The population rebelled, they attacked the homes of prominent pro corn law ministers, chanting “No starvation, no landlords”.The mob wanted an immediate end to the Corn Laws.

British industry was also in trouble.

The Government stopped spending millions on British uniforms and contracts for subsidised foreign ones fell away. With no need for armaments, the price of iron plummeted. The European market had gone pop, Napoleon had won a battle of sorts, he had obliterated the European economy. More than that though, British manufacturers threw their products at new markets such as South America. They over produced goods, over egged the size of the markets and did not understand the lack of buying power in those countries. People had no purchasing power. Industries closed putting workers out onto the streets, a mass of unemployed added to the returning soldiers and sailors. The population faced a dire future.

‘Reduce the taxes,’ they cried.

The government had taxed almost everything and the people of Britain had stoically stood alongside the politicians but this was after Waterloo, the battle had been won. The poor paid the heaviest price. The beer they drank and the bread they ate,  had some of the highest penalties. The hated income tax, introduced by Pitt, stood at 10%. Its abolishment after the war had been promised, it took a year of bitter words to see it abandoned.

The armed forces were cut.

Eighteen months after Waterloo, 300,000 men were dismissed from the services, without pension or acknowledgment, a shameful thing to do. The Battle of Waterloo had exacted a huge price from these men. The national debt was enormous, Napoleon referred to it as a;

Paper money had usurped metal coinage and the banks had done well out of the paper currency during the war. There was now though a demand for the return to gold. There were concerns about the amount of bullion leaving the country. The government fought off this move but in 1818, a return to gold caused paper money to drop out of circulation by varying degrees. There was however a reduction in the amount of precious metals worldwide and Britain found itself trapped in a financial and economic bubble. The buying power of people near and far, was at rock bottom. In Britain the poor struggled to buy bread, with which to feed themselves. By denying the workers their share of the wealth, the government and its advisors had tipped a bucket of cold water on any chance of growth. The debtors prison, the money lender and the bankruptcy courts were a common part of peoples lives in Georgian Britain. The great banks of Barings, Coutts etc, did well negotiating loans, mortgaging and buying up whatever good property and business they could. The Jewish money lenders poured into Britain and exploited the empty niches left. The Rothschilds were a phenomena born out of the ashes after Waterloo. They, in effect, saved the governments of Europe. They dominated credit all over Europe. This country owes a huge debt of gratitude to the Rothschilds.

‘Oh it rains again, it beats against the window

The crops were destroyed in the fields. The seas were too rough to sail and goods piled up in the docks. Neither the mad king nor the arrogant government seemed able to see the size of the problem around them.he utilitarians led by Joseph Bentham advocated a different response but there was, despite the talk, little change in the system.

Revolution was becoming increasingly possible. Humble labourers became part of violent demanding mobs. The military were sent out to suppress any uprising. The anger spread, William Cobbett was at his most heated, stirring up revolt via his pamphlet ‘The Political Register’. The Spa Fields Riot in London took place at this time. Matters came to such a head that habeas corpus was suspended. Still though there was respect amongst the classes at ground level. Many farmers shared their food with their workers and although angry, many mobsters listened when asked to disperse, why? because it is the British way. As were the soldiers at Waterloo so were they at home when faced with terrible conditions. In the main stoical. Cobbett and his ilk fled abroad and things began to calm down.

From rock bottom, the only way is up.

The tide began to turn on British exports, once prices had hit rock bottom, the world began to buy British goods again. The good harvest of 1817, coupled with a moderate import of foreign grain, allowed bread prices to fall a little. Britain actually looked prosperous to any looking on. It is the Jane Austen world of Georgian style, with stately homes, stylish fashion, literature, engineering master pieces in the form of iron bridges and factories and pious rich people, keen to ‘improve’ the poor, starving homeless,  the other world of slums, workhouses and great deprivation.

From this sad and potentially violent situation emerged parliamentary liberalism.

Middle class reformers emerged from the post war mess calling for parliamentary reform. The poor just wanted a decent wage, they had little care probably for constitutional change. Reform blazed across the country and the summer of 1819 blazed. We all know about hot summers and hot tempers even today. In the northern manufacturing districts the ranks of industrial workers turned out yet again, this time in support of reform. The government responded. The massacre on St Peter’s Fields was the result, where as many English men and women stood as had stood on the battlefield at Waterloo. The Yeomanry rode into the rally and blood was spilt. It became known as the ‘Peterloo Massacre’. The English had no stomach for this form of military response by government. The rule of England was in a mess. 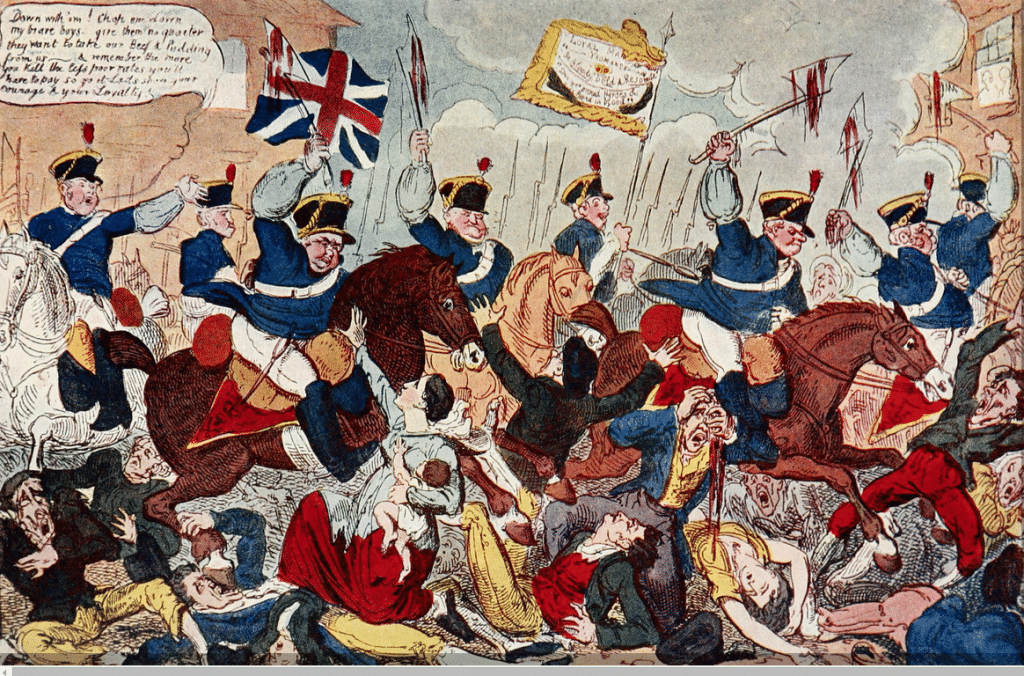 The Peterloo Massacre by Cruickshank

The poor found themselves exploited yet again.

The rich exploited the poor, now the reforming middle classes were doing the same, intent on using the misery and anger of the people as their shield. They had unleashed a rabid dog and now it was running, the reformers were scared they could not control it. In 1820 the old king died and the new king, King George IV heralded in more problems, the debacle that ensued with the exploits of Catherine his wife, just fueled the fire. England was as close to revolution as at any other time. The affair with the queen was eventually laid to rest and it seemed the fire went out of the mob. The radicals began to be locked up and as trade improved and the harvests yielded good crops, the pain the population had borne seemed to ease a little.

A cycle of boom and bust ensued.

It need not however have been like this. Britain had plenty of money, it was teetering on the edge of the industrial revolution but hadn’t yet quite grasped the enormity of the skills it had accrued. It was like a person regaining consciousness, drifting in and out of reality. Cobbett put it rather more bluntly when he wrote;

‘turning its pate upon one side, seeming to listen but has no hearing, seeming to look but has no sight. One day it capers and dances, the next it mopes and seems ready to die’

The poor were still starving amidst a sea of plenty. Any that posed a threat were shipped off to Botany Bay, the men who had served the Duke of Wellington at Waterloo, were, ten years on, suffering terribly or waiting on prison hulks to be sent to the other side of the world.

Britain was flummoxed by the post war economic situation, the rich grew richer and alienated the poor without  the sense to see what was happening. In giving the British their freedom with one hand, they had taken it with the other.