The Corn Laws 1815, these laws had a profound impact on every man, woman and child in Britain

Sometimes we can see the small stories of individuals played out against the broader historical backdrop and few were to have as big an impact on the ordinary man and his family than the ‘Corn Laws’.

Land owners of course did not want to see the Corn Laws repealed and since they held the majority of the voting rights in Britain the laws were going to stay in place.

The result of which, was to keep grain prices and therefore bread prices artificially high.
The profits of the landowners grew but for the ordinary people the high bread price brought many to the brink of starvation. The bulk of their income was spent on bread. This effectively closed down the economy because they had no spare money to buy anything else. Unemployment in all sectors rose. The poor workers could suffer no more but their pleas for repeal fell on deaf ears and they resorted to violent riots and demonstrations to get their message across. 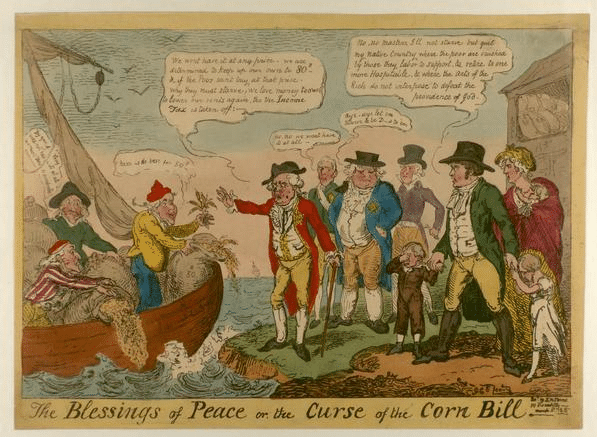 The Corn Laws spread their misery for decades

The Iron Duke, the Duke of Wellington became prime minister and he made reforms to the Corn Law in 1828 but they were measly reforms that had little impact on the real situation. The price of corn was no longer fixed but moved to allow foreign grain to be imported freely when domestic grain sold at 73 shillings per quarter or above.

The Corn Laws were a very important spur to the formation of a reform movement.

Throughout this period there was a coming together of people from the merchant middle classes, who saw that reform was needed across many areas of society to make it better for all but most especially for the poor working class. Amongst these reform groups was one that was concerned with the Corn Laws. They called themselves the Anti Corn Law Association. They were concerned, as you would expect merchants to be, with all trade restrictions, they wanted to be able to trade freely around the world. Their work was pivotal in getting the Corn Laws repealed, but this was also from a position of self-interest.

In 1846, the government under Sir Robert Peel, was persuaded to repeal the Corn Laws.