There resides in the British Museum in London, one of the most intriguing gold coins ever minted. It was bought in Rome about a hundred years ago and this is important when considering the purpose of the coin.

The gold coin of Offa, king of Mercia, is a unique object because it imitates a gold dinar of the caliph al-Mansur. Although the Arabic inscription is not copied perfectly,the declaration that ‘There is no Deity but Allah, The One, Without Equal, and Muhammad is the Apostle of Allah,’ is clear. 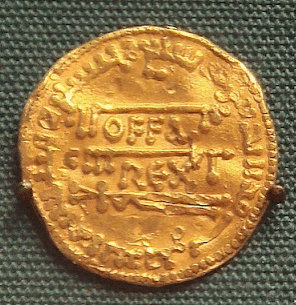 Offa was concerned with uniting England under one King but he also made it his business to foster good relationships overseas, both from an ecclesiastical viewpoint but also a trading one

So why does King Offa’s gold coin exist, inscribed with Islamic script?

A number of theories abound:

No other coin the same as this one has been found and so it seems feasible that it was a ‘limited edition’ minting, probably to give to the Pope as part of Offa’s vow and the fact that it turned up in Rome seems to lend credence to this argument.
Whatever the answer, the coin remains a beautiful and symbolic artefact, telling us of a world of mixed cultures and identities twelve hundred years ago.