Richard I was a Plantagenet King, son of Henry II, born 1157, reigned as King of England 1189-1199. He was the 3rd son of Henry II and Eleanor of Aquitaine. It was intended that as the 3rd son he should inherit his mother’s duchy and from an early age he was closely aligned with the duchy of Aquitaine. Richard’s mother was a force to be reckoned with in her own right, she was far from a woman under the thumb of a feudalistic husband, even if he was a King. She actively encouraged Richard to rebel against his father. 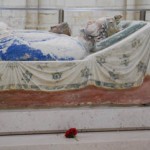 Richard I was a legend in his own and other’s lifetimes, he was an educated man, a songwriter he understood the power of Words and he deliberately cultivated his Lionheart image. The opinion of historians has oscillated over time, as he left England, spent little time there and focused on his wider interests. The reality appears to be that his responsibilities were wide ranging and that he sought to execute them diligently and prioritising where he needed to focus most. His father had not been much of an example in Kingship and Richard had followed his commitments to his lands dominions and the Church, he may have neglected England but he believed he was making the right choices in difficult times. What history may not forgive him was the failure to secure his own line of succession, leaving the despotic John to rule England who almost by accident rather than design gives us Magna Carta, perhaps the only positive outcome from him sitting on the England’s throne? Sounds harsh, read on here for more about King John.
Find out more about the British Kings and Queens here or explore our 12th century collection further.