King John of England was the youngest son of Henry II and Eleanor of Aquitaine, his siblings included Henry The Younger King (his eldest brother) and Richard I , the Lionheart. Already you can get a sense of te context and perspective in which John’s life and destiny would take shape. Born into Angevin Empire and Plantagenent Empire where scheming and plotting were rife, he grew-up fearing that forces were intent on working against him and determined to outmaneuver those closest to him. Historians have often cited John as the weak, manipulating and jealous younger son was this really true?

John had master-minded his own muddled political mess and would engineer relationships and alliances and drop them as quickly as he forged them. He was forced into meeting the Barons at Runnymede and agreed to their terms only for the purpose of expedience. He had no intention of keeping to the letter of the law as set out in Magna Carta. It failed as a peace treaty and would perhaps have failed overall if John’s demise and death had not occurred in the following year in which it was sealed. John achieved very little that was constructive during his life but this one inadvertant act whilst not working immediately has had an impact over the last 800 years of that we are certain. How intriguing and ironic that it was an act he had no intention of fulfilling but created perhaps the most iconic and significant legal document of all time? It certainly impacted across many nations and formed an intrinsic part of many common law and formal written constitutions.

Henry II had earlier favoured Richard but overtime he swung towards John. Leading Richard to firmly align with the Angevin interests and base himself in France, seeking constantly to strengthen his position and ensure his dominance in the line of succession. This was a family in constant turmoil and conflict with even John’s parents being in a constant state of virtual war and enmity both metaphorically and sometimes quite literally.

You can point and click to see a larger version of this diagram or download a pdf version here: Ancestors of JOHN PLANTAGENET 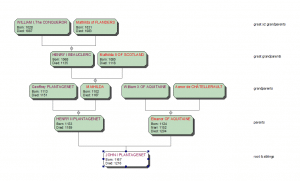 This is a work in progress but is too large to display here in full, simply click here to open King John descendants diagram as a PDF Descendants of JOHN PLANTAGENET v1

This sets out the major dates and events in approximate chrnological order for the life and reign of King John.

Over the next 10 years he built-up his war chest and sought to prepare for counter attack on Philip, to buy favour and diplomatic power to support his proposed campaign. Philip planned to invade England in response.

The passing of time has shown that whilst introducing and signing Magna Carta, a critical document in the future development of democracy it was more by default than by a desire to engineer a better form of government, his oppressive style did not reap the political and military successes demanded. John was a poor King for England and largely responsible for the loss and decline of the Angevin Empire, hardly a success…so how would his son and heir fair in what was to shape the next reign…

To find out more choose from one of these links and explore some more about this intriguing and often mytholigised period in British History: