Law of the Land Magna Carta

Law of the Land Magna Carta

On June 15th 1215, on a piece of marshy ground, which afforded little opportunity for either side to launch an attack, the Magna Carta was signed. It is not a document that brought peace, within a few months England would be plunged into Civil War.

So what, therefore, is the importance of the Magna Carta, why 800 years on, are we celebrating the anniversary of its authorship?

The answer is simple. Halfway down the document, two rights are granted to the people of England that have never been superseded and they form the basis of the Law of the Land.

And not just this land but if you live anywhere in the world where your parliamentary system is informed by Common Law, then these grants within the Magna Carta have enshrined your law also and impact on the world in which you live.

Magna Carta is the document on which the Common Law is founded.

When an angry King John pressed his seal onto the document, he could have had no idea of the impact of this action. Its an extraordinary thing, that it took the seemingly odious, cruel, egotistical nature of one man to spur into action something that has brought so much good into our world.

When you take time to think about it, the drawing up of such a document was quite extraordinary. Wouldn’t it have been easier, in the time honoured manner to simply ‘do away’ with King John? The 13th Century was not a time when people shied away from armed conflict and the King had been extremely brutal in the way he handled his barons.

Charters had been written before and they were not worth the vellum they written on. 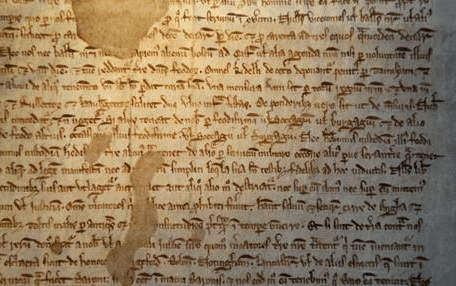 What was different this time and why did the barons think that they could hold King John to this charter?

The charter itself gave the right to the barons to choose twenty five men to ensure that the document was enacted and that the peace and liberties granted were maintained. These twenty five barons would, for the good of the whole community, determine whether or not the King was guilty of any transgression and if they could not be unanimous in this, then it would be determined by a majority.

The answer to this charter’s success must surely have been these twenty five barons and the way they administered their duties.

The charter gave the community rights over the individual and could be used to assert authority over that individual, in 1215 that meant the King himself.

It this principle, that a ‘community’ could possess rights of its own is what gives us the right to live in freedom, without fear from our politicians, our Monarchy, our police or judicial system.

Magna Carta was not, in its time a success. In fact it was a failure.

It had an enforcement clause that was never going to beacceptable to any monarch, it was unrealistic. The concept of twenty five barons having the right to seize all the king’s possessions if he broke any of the other clauses, was fanciful. Within a matter of weeks, King John appealed to the Pope to have the document annulled and the Pope agreed.

It was a document of its time, the bulk of it dealing with the tax issues of the day and it was not intended as a document that would be relevant 800 years down the line. The common man saw little in the document for himself, it was simply a power shifting exercise between the King and the barons.

Having said that, it is obvious that there are hints of grander and nobler ideas within the document.

The Archbishop of Canterbury, Stephen Langton was a very intelligent and shrewd individual who arbitrated between the King and the barons (later siding with the barons themselves). It is thought it was he who negotiated the inclusion of the certain clauses that would highlight and separate the relationship between King and subject.

The tax to pay for war, ‘scutage’ was to be levied only with “the general consent of the realm”.

And the truly important clause of Magna Carta.

“no free man shall be seized or imprisoned, or stripped of his rights or possessions, or outlawed or exiled, or deprived of his standing in any other way, nor will we proceed with force against him, or send others to do so, except by the lawful judgment of his equals or by the law of the land.”

We cannot truly know what this clause meant, trial by jury had already been established in Anglo Saxon England.

Other charters and edicts in Europe had similar clauses and what exactly was meant by the phrase ‘LAW OF THE LAND’? Where were the statutes? They did not exist, so was the law of the land defined by customs harking back to Anglo Saxon times?

Magna Carta would have sunk without trace if it had not been for two knights separated by over three hundred years of history.

Sir William Marshal and Sir Edward Coke were men of supreme intelligence and strength, whose desire and will to make things happen because it is right they should do so, kept Magna Carta at the heart of Common Law. 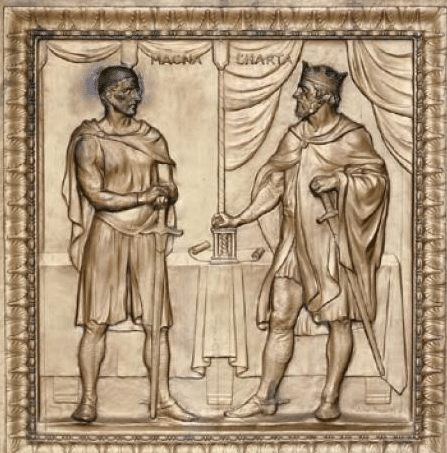 Plaque on the doors of the US Supreme Court