Part 2 of Neville Chamberlain: Appeasement was it necessary pragmatism or political moral cowardice?
WW2 Was a Peace Treaty really just a long prelude to WW2 and the British Policy of Appeasement

In this the 2nd part of our series about British Prime Ministers and in this case Neville Chamberlain and the crisis which led to the 2nd declaration of war against Germany, it might seem strange to hark back to the Paris Peace Conference and the Treaty of Versailles? 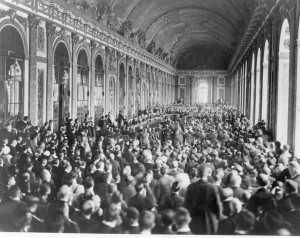 But it soon becomes clear and key to understanding why Chamberlain was seeking a path of appeasement and why Hitler had built-up a following amongst even the general public in Germany during the ‘inter-war years’ at least partly incited by the treatment of Germany and the less than magnanimous victors at Versailles.

The reality was the Armistice and German Surrender on 11th Nov 1918 at the close of WW1 was just the beginning of ‘Peace-Making’ what would happen after the war-making had stopped would be as important if not more so than the cessation of actual hostilities. 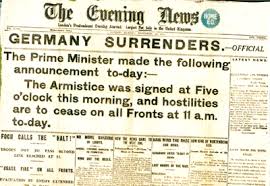 The Parish Peace Conference produced the Treaty of Versailles out of a five month process that was driven primarily by the leaders of the great allied powers, it did not include any German representation. The main parties were the victorious powers led by Clemenceau of France, Lloyd George as Prime Minister for Britain and US President Wilson. Prior to the conference President Wilson had identified 14 key points to the peace and it was on those points that Germany believed ‘peace had been agreed.’ But around the Hall of Mirrors in the palace of Versailles there were many different interpretations of what peace should look like and it was all geared at being punitive to Germany and making reparations for he damages to those who had suffered most during the four year conflict.

Lloyd George had adopted his slogan ‘Make Germany Pay’, Clemenceau was embittered at the heavy price France had paid and Wilson was seeking an idealistic solution. 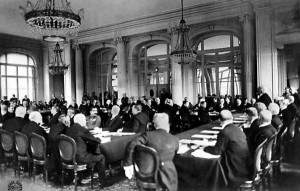 Whilst Lloyd George had adopted his jingoistic slogan for popular appeal he also knew he needed a Germany for Britain to trade with that was not crushed and an economic liability. Its important to note what comes out of this victors imposition on the defeated Germany;

In parallel to Versailles Russian Bolshevism, Lenin and Trotsky posed a considerable threat and Communism was the growing evil most feared by Britain and the allies. In Germany as right and left positioned (frequently with German Jews) joining the revolutionary forces they and fought one another jostling for power. There was a concern that Communism would spread and that somehow Britain needed Germany fighting Bolshevism not joining it. There were many incidents when Communists and the right wing conflicted with violent repercussions.

Red Guards Fail to Arrest a Corporal, but why does that matter?

In April 1919 one such reprisal took place when the Communist revolutionaries were retaliating the White and the Red forces were constantly in conflict: In this reprisal for the execution of Red army soldiers the revolutionaries were seeking hostages and they were including in their search a Corporal stationed in the Barracks of the 2nd Bavarian Infantry Regiment. This Corporal had already acquired a reputation for being an ‘anti-Communist’ orator, his name was ADOLF HITLER. On a pinhead history turns, brandishing a pistol somehow the corporal frightens-off the three Red Guards had were there to arrest him. He was a member of the right wing racist THULE SOCIETY.  In that search for hostages 16 were taken prisoner by the Red army, 10 were executed, the killings were denounced by the papal delegate at the time, but one of those that escaped would have grave repercussions for millions within the next twenty five years or so.

Back to the Roots of Appeasement

The wounded imperial pride of Germany, the perceived injustice of the outcomes of Versailles would fester in the spirit of Germany for decades to follow. It might be fuelled by extreme nationalism but it was also being created by the the very peace treaty that was supposed to end the war war and hold the peace.

LLoyd George had set out in his ‘Fontainebleau’ memorandum some of his key concerns for peace-making but he too was caught between the electioneering of ‘make Germany pay’ and the realism of maintaining peace and a balanced Europe going forward.

“peace would depend upon…there being no causes of exasperation constantly stirring up either the spirit of patriotism, of justice, of fair play, to achieve redress…peace ought to be dictated in the spirit of judges sitting in a cause which does not personally engage their interests or emotions, and not in a spirit of savage vendetta, which is not satisfied without multilation and the infliction of pain and humiliation.”

Important in terms of our concerns with the future British policy of Appeasement Lloyd George also said the following, which is chillingly prescient of what would come about and perhaps an insight into the British National psyche that is key in terms of Appeasement as policy.

“Germans were proud, intelligent, with great traditions” and the people under whom they were being subjugated within the Versailles Treaty were in his words “races whom(the Germans) they regard as their inferiors, and some of whom, undoubtedly for the time being, merit their designation”

What telling and unwelcome words if you were part of those smaller nations which included Poland, Czechoslovakia as well as the Slavs, and Gallic French. Telling as a major British Leader 20 years before Chamberlain’s Appeasement policy is put into practise we can see a peculiarly British, superior and also imperialistic viewpoint even from Lloyd George. His radical reforming zeal more reserved for domestic matters and not the international stage perhaps? But it shows an attitude that pervades at the ne dof WW1 as victors and 20 years before Chamberlain faces his momentous decisions and consequences.

Versailles changed almost every European Boundary. Within the US Senate it was becoming too profound to stomach. Wilson lost the vote in the Senate and the US withdrew from the Versailles Agreement after the Senates proposals for amendment had been rejected by Wilson.  it was a grave mis-calculation and the lack of the weight of the US behind the arrangements was unhelpful. It weakened and isolated the European driven solution and it profoundly motivated German imperialists and nationalists to want to rise again and establish its great empire, with a long list of what it perceived as lesser nations targets to be stripped of previously German lands.

Versailles was not creating the environment for peace, it was too busy digging in the knife on Germany, leaving a deep scar that would not heal easily and could be used by those insane and unscrupulous enough to use it as a rallying cause, strengthened by overt racism and hatred of the minorities that had contributed to its downfall.

How can you evaluate Appeasement as a British Policy without knowledge of the flaws sewn buy this cartographer’s patchwork of peace stitched poorly together by committee at the end of WW1? With this in mind in our 3rd part of this series we can look at the substance of Appeasement and the rationale used to justify its adoption as British Policy and whether it was as the result of the folly of Chamberlain or a deeper and widespread political nightmare that it is justified, pursued, inevitably fails but was perhaps a necessary step to enable Britain to prepare for the war that was perhaps almost inevitable as Germany recovered its might and sought to avenge its emasculation of its empire cause by the way in which peace was dictated by the Allies at Versailles.

France in particular had sought retribution at Versailles, but little did it understand the true horror that it’s less that balanced settlement of Versailles would unleash upon France, Europe and the other major theatres of war in in the period 1939-1945.  Chamberlain and all the political parties in Britain should and would have been aware of these facts as they faced momentous decisions in 1938 and 1939. The next question is did Chamberlain learn from it and adapt his policy of Appeasement in the hope to give at least some pause in the rancour of Hitler marauding across Europe or had he and his cabinet been left high and dry by the British Governments of Baldwin and others that had marshalled Britain rightly or wrongly during the interwar years.

When Baldwin resigned did he nominate Chamberlain for the the ultimate ‘Poison Chalice’ a situation already beyond redemption or could Chamberlain by appeasement or other policy have ever really stopped the Nazi machine by words alone? How important are the decisions 20 years earlier from Versailles?

For more articles on WW1 and WW2, or British Government and Politics or our List and links to British Prime Ministers (simply click on the links) and part 1 of this series Neville Chamberlain Prime Minister Appeasement Pragmatic Policy or Political Moral Cowardice