Neville Chamberlain Prime Minister 1938-1940 Domestically focussed and out of his depth internationally?

Son of a Political family, Conservative Politician and Prime Minister, was Neville Chamberlain a politician out of his depth in international affairs? 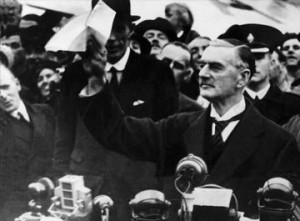 Was he just hopelessly naive about Hitler’s Germany and too embroiled in domestic agendas and the desire for social change and improvement after the depression of the 1930s to handle the run-up to war? Is it just too easy to focus the blame on Chamberlain; would it really have made a difference to the ultimate outcome if Britain under his leadership had taken a different political position with Hitler? Why has any of his good work been obscured? Can we really damn a Prime Minister for wanting peace and appeasement, and a desire not to enter Britain into a war it could perhaps avoid knowing it was still paying and recovering from the last one?

Part 1 of a short series tackling a Prime Minister who is generally seen as a failure on the basis of a critical point in time in the buildup to World War II. We seek to broaden the context and get a little insight into whether the criticism is deserved and warranted  by taking a look at his political inheritance from his experienced father and brother, his deeds before the critical point in time in 1938-1939. Its not enough to just recite key dates and events, we need to see if there is more to be understood here to better balance the books in his favour or just confirm the soundbites that have cast this premier as a failure from most British perspectives.

This first part focuses on the background of his politically active family, in particular his experienced father and brother. Their regional, international and national political perspectives and experience should surely have given Neville Chamberlain a great grounding whether he agreed or disagreed with their viewpoints. What could he have gleaned from their political legacy, given the brother’s could and most probably did share insights and views on their shared political lives. It was only in the last two months before Neville Chamberlain became PM that he was without his brother’s experience and shared insights in Parliament. It doesn’t seem to add-up why would this Prime Minister be so naive? Is the popular view accurate or tainted and blurred by the years in between. It also seems just too convenient for the British people to be able to (and be too good at) laying blame on a single man’s doorstep for ultimately a national error. Where were the rest of the cabinet and why would he not listen to the voices that cried out?

Born Arthur Neville Chamberlain, the son of a political family with a brother, like Churchill warning of the threat of the Nazis from 1933. Chamberlain was born during the reign of Victoria in 1869 and sadly died from Cancer within a year of the outbreak of WW2 in 1940. He had been born into a political family led by his father Joseph Chamberlain (1836-1914) Screw-manufacturing Industrialist and Birmingham Politician and his half brother, Nobel Peace Prize Winner. Sir Austen Chamberlain (1863-1937.) 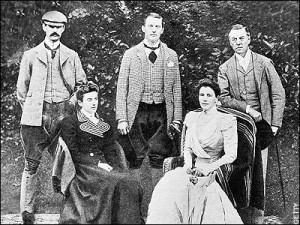 Whilst becoming Prime Minister quite late at 78 did the political background and legacy of knowledge of his father and elder brother influence, inform and direct Neville’s career? To find out we need to understand how that background might have influenced the Chamberlain as domestic politician and also in respect of foreign affairs and the key decision he would make in the period 1938-1939 before the commencement of WW2. 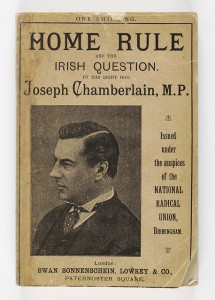 Joseph Banks was Unionist and ardent campaigner on the Irish Question. He cut his political teeth cleaning up the slums of Birmingham.

Father Joseph Chamberlain Manufacturing Industrialist with a political focus based on Birmingham where as Mayor he transformed the city from an industrial slum to a model municipal area. Known as a dynamic and radical reformer who ate, slept and drank politics. He became a Liberal MP in 1876,  he resigned over Irish Home Rule when Gladstone converted his policy, he led the Liberal Unionists including his elder son Austin was a committed imperialist and expansionist. He was the Colonial Secretary largely responsible for British policy towards the Boer War. He cared little for party politics other than as an instrument of achieving his overall avowed objectives. He believed in Imperial Preference and wanted to abandon Free Trade, launching a campaign for Tariff Reform in 1903. This was politically important because it led him to resign from government, split the Conservatives and led to the landslide Liberal Victory of 1906, which would in turn lead to the People’s Budget Crisis of 1909 and the Parliament Act of 1911. It is also a considerable backstory to the career of his 2nd son Neville Chamberlain. But first what of his eldest son Austin?

His brother Austin was a Conservative and Unionist politician, educated at Rugby and Cambridge University. He entered Parliament in 1892 as a Liberal Unionist under his father’s leadership. He was groomed to be his father’s political heir and was respected in his own right winning the Nobel Prize for Peace  for his involvement in the Locarno Treaty. The Locarno Treaty aimed to guarantee French security and German frontiers. Locarno failed to inhibit Hitler from reoccupying the Rhineland in 1936 but from 1933 Austin was consistent in his his warnings about the threat of the Nazis to Europe and was one of just a few to do so. He pursued his father’s belief in and campaigned for Tariff Reform, after his father’s retirement. He was in conflict with and not really of, the old traditional Conservatives, he made a bid for the leadership to succeed balfour but withdrew due to inadequate support leaving the path clear for Bonar Law as the compromise candidate. He served in the WW1 Coalition governments under Asquith and Lloyd George, supporting the Liberal Prime Minister during the Conservative Backbencher revolt of 1922 which destroyed the coalition. Appointed Foreign Secretary under Baldwin in 1924 he negotiated the Locarno Treaty. He would also hold a brief appointment as 1st Lord of the Admiralty under McDonald in 1931 but subequently worked from the back benches in a long dignified parliamentary career but never really fulfilled the ambitions for high office that his father had groomed him for.

A lengthy introduction to Neville Chamberlain’s father and brother perhaps but it goes some way to explain a level of expectation and deep experience of the family into which Neville was born. How would he measure up to such expectations and what contrasting differences would that career reveal and would they be significant in his impact on and contribution to the development of Britain and its history in the 20th century?

Neville Chamberlain and Domestic Politics before 1938-1939

Neville was the only son by his father’s second marriage, he was also educated at Rugby but then attended Mason College (future Birmingham University.) He pursued some accountancy skills, and tried to help revive family fortunes with a plantation in the Bahamas that failed. He subsequently invested, with family help in Hoshkins and Company who made metal ship berths with some financial success. He was not an avid political animal but became involved in Birmingham’s civic life including as  governor of the Birmingham Hospital and other local entities.

He became Lord Mayor of Birmingham in 1915 with the outbreak of WW1 in a highly industrial area his workload was significant. By 1916 LLoyd George had appointed him as Director of Conscription but he had difficulties and conflict with Lloyd George and had resigned after little if no support form his Prime Minister in 1917. Their dislike for one another was noted and never recovered and bordered on contempt for one another. Neville finally decided to seek election at the General Election at the end of WW1 and was elected with more than 70% of the vote, a first-time MP at 49, quite late to then seek and attain the Premiership.

He would be in and out of government including as Chancellor as governments rose and fell with some frequency but he was most at home as Minister for Health and with an agenda of 25 pieces of legislation by the time he left office in 1929 had managed to see 21 of the 25 passed into law. This had included the abolition of the Poor Law Board of Guardians which had been politically abused by Labour to administer relief to able-bodied unemployed for which it was not intended. During this period as well as his prior enmity with Lloyd George he displayed thinly displayed contempt for the anything and anyone Labour based. His inability for forge cross party alliances would be his undoing as Prime Minister in the years to come.

By 1937 Chamberlain almost by default was Prime Minister, it was certainly not by popular acclaim, so how would he make the most of this political opportunity as the storm clouds were gathering force across and around Europe?  Finally a Chamberlain as Prime Minister, his brother Austen and his father would not see him attain the premiership and how would he direct his leadership now the top job was in his hands at such a difficult time?

Was Chamberlain too domestically engrossed?

British Foreign Policy needed to be addressed. Chamberlain and his brother in particular had both identified and cited the need to gear-up and be aware of and ready for the threat of Hitler’s Germany from the early 1930’s but we should not forget this was also on the tail-end of a massive depression of the early 1930’s there were a huge number of concerns at home as well as abroad that needed addressing. The issue was what was Chamberlain doing about the Foreign Policy elements? In the 2nd part of this series we will explore what happened in respect of Chamberlain and Appeasement, was he a didactic voice that would not heed the advice of others, or just a man desperate to at least try to avoid huge loss of life and a repeat of the disasterous human and financial loss that might result from all out conflict with Hitler?