A bland and boring title the ‘Parliament Act 1911’ belies its great significance. 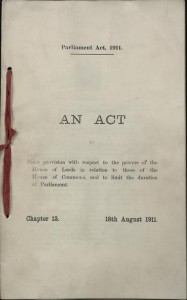 It was because of this simple act that the historic and hereditary power of the King’s Barons finally gives way to the democratic right of most of us via our House of Commons to determine the laws of the land. Finally ensuring that only the elected members of the Commons can determine and stop laws from being passed that have been agreed by our democratic process.

It would time limit the obstructive actions and process that the Lords could use to stop laws seeking to be passed by the Commons being enacted. Given the Bill of Rights dates back to 1688, De Montforts first parliament to 1265 and Magna Carta to 1215 it is quite extraordinary that it should take to 1911 for this matter to be resolved. How did it happen, it would take a People’s Budget, a reforming liberal government and the death of Edward VII but with the start of the House of Windsor under King George V a new age in the Palace of Westminster had begun.

In the early years of the 20th Century the House of Lords had retained the right to veto legislation that had been duly and democratically passed in the House of Commons. This was a relic of the end of a Victorian era in which the role of the aristocratic landowners and hereditary Lords had clung onto power.  There was some new peers emerging from the new money of the industrial magnates but they had sought to largely join the ranks of the rich and privileged for their own benefit rather than to broadly widen and democratise government and politics in Britain. Many of the old hereditary peerages stilled hailed back some 200 years or more and they were reluctant to concede supremacy to the commons.

The Liberal ‘People’s Budget of 1909 proposed by Lloyd George and Backed by Winston Churchill brought these matters to a head and following two general elections and the death of Edward VII in 1910 led to recourse to legislation so that the lords could never again seek to veto legislation that had been passed in the Commons.

It was the Liberal Government of Asquith largely powered by the reforming energy of David Lloyd George that had led to the People’s Budget becoming an effective gauntlet and challenge of the Lord’s ‘Bill wrecking tactics’ of the Conservatives. This was an important moment in British History as well as Politics and Government. This is happening when women still do not have the vote, when Germany is building its naval assets and Irish Home Rule are all issues that threaten to bring down a government. But the disruption over the debacle of the People’s Budget does enable the new Act to be passed in 1911 enabling the Commons to pass a Bill that ensures the Lords can only delay a Bill one year for financial (money bills) and two years for non-money bills. 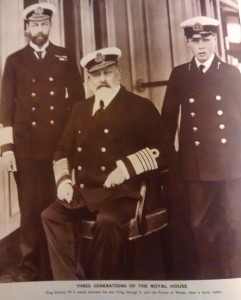 Historically this simple bill has enormous significance, note how late in our history it happens, when the Lords, aka the King’s Baron’s finally relinquish true executive power. Whilst they retain their hereditary rights, they can no longer force or direct the course of governance other than as a scrutinising and cautionary body in effect advising and counselling Parliament but no longer deciding whether a law should be passed or not. The Monarch’s had already relinquished their executive power but now in 1911 the Lord’s had held the balance of parliamentary power for the last time. In future the government of the day could determine to elect its own new peers and rebalance the voting balance in the Lords to better reflect its majority in the Commons as well. But the key turning point has finally been asserted in law, the Commons is superior to the Lords not just by convention but by statue and beyond any reasonable doubt.

Whilst we revel in the wonder of 750 years since de Montforts 1st parliament and the glory of Magna Carta we might ponder a little at the vulnerability of a system that took so very long to recognise the rights of the Commons to determine the laws of the land above the rights of its privileged Lords.

Click here or more on the History of British Law , or to explore further how Leadership Government and Politics has developed throughout and impacted upon British History.