When King William III and Queen Mary II were offered the crown, it was accompanied by a Declaration of Rights, this became the Bill of Rights and was a significant landmark in the long struggle that had been going on between monarch and Parliament during the reign of the Stuart Kings. The Bill of Rights limited the Sovereigns power in several important areas.

The suspending of laws or exempting individuals from those laws, by royal authority was no longer allowed. The monarch could levy no taxes, nor keep a free standing army and Parliament should be free in it’s electing and it should be able to meet regularly and freely.

This critical document occurred in the period of enlightenment and there is an excellent reference in the House of Commons Library House of Commons Library link to document and discourse on the Bill of Rights  which helps to set the context of the document for social and for family history purposes. There seems little point trying to precis as it is such a considered work in itself but referenced to the related documents and you have the essence of why England and eventually the UK, is, as we see it today.

“It is one of the four great historic documents which regulate the relations between the Crown and the people, the others being: the Magna Carta (as confirmed by Edward I, 1297), the Petition of Right (1627) and the Act of Settlement (1700). To this list of fundamental constitutional documents should be added the recent Human Rights Act 1998.”

All people of a nation are obviously subject to and impacted by such substantive legislation, which culminated in the exile of King James II and the accession to the throne of William of Orange and Mary. Its intentions were: to depose James II for misgovernment; to determine the succession to the Throne; to curb future arbitrary behaviour of the monarch; and to guarantee parliament’s powers vis a vis the Crown, thereby establishing a constitutional monarchy. 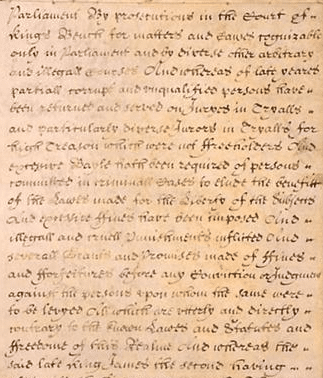