Who Was Simon de Montfort?

Who was Simon de Montfort?

He was, in no particular order;

Simon de Montfort was born in 1208, the third son of four. His father, Simon IV de Montfort, was a crusader, a tactically brilliant man who became known and feared for his cruelty and for his “treachery, harshness, and bad faith.” He may at times though have been a reluctant warrior but because of his faith, he was a man of extreme Catholic orthodoxy, committed to the suppression of what he believed to be heresy, he carried out orders goven to him by the church absolutely.

Simon de Montfort’s father therefore was a strong, fearless, intelligent and committed man. Some of these traits observed by and maybe passed on to his son.

He descended from the lords of Montfort l’Amaury in France, near Paris. He passed on only a small estate in France, north of the forest of Yveline.

His grandmother, Amicie de Leicester was the eldest daughter of Robert de Beaumont, 3rd Earl of Leicester. Her brother Robert de Beaumont succeeded as 4th Earl of Leicester, but after his death without children in 1204, she inherited half of his estates and a claim to the earldom. The estate was divided early in 1207, and under the division the rights to the earldom were assigned in part to Simon de Montfort’s father. However, King John took possession of the lands himself in February 1207, and confiscated its revenues. Later, in 1215, King Henry III passed the lands into the hands of Simon de Montforts father’s  nephew, Ranulph de Meschines, 4th Earl of Chester.

Simon de Montfort’s father claimed the earldom of Leicester, and so is often referred to as a Count in general or specifically the Earl of Leicester (a French count corresponding to an English Earl).

Simon had an older brother who pressed his claim to the Earldom of Leicester but was not successful. Simon took up the claim and already known to King Henry III for his intelligence and prowess in battle, Henry agreed to accept Simon’s claim but only after the 4th Earl of Chester had released his prior entitlement. Simon took matters into his own hands and managed to persuade Ranulph de Meschines to sell him his right to the Leicester lands.

Simon de Montfort was not a wealthy man and these payments for the Leicester lands were the basis for the financial problems that Simon had for most of his life.

Despite Simon being a French noble King Henry III made Simon welcome in England. Simon was by all accounts a charismatic man and the two men were friends throughout the 1230’s. At this point lack of money was Simon’s main concern, he tried to make a good marriage with a French heiress but his friendship with the English king caused him problems. Simon used the King to improve his fortunes and it was his behaviour in using the King in this way that led to the two men having bitter quarrels. Again though Simon’s charisma won out and he persuaded the King to allow him to marry Eleanor, the King’s widowed sister. It appears to have been a love match, certainly it was a powerful union.The King must have realised that the gift of his sister’s hand to Simon de Montfort would prove controversial amongst his English barons, as the ceremony was held in secret with only the King present. This proved to be the case, the barons were unhappy as was the church and in the end de Montfort had to ask the Pope to intervene and sanction the union. 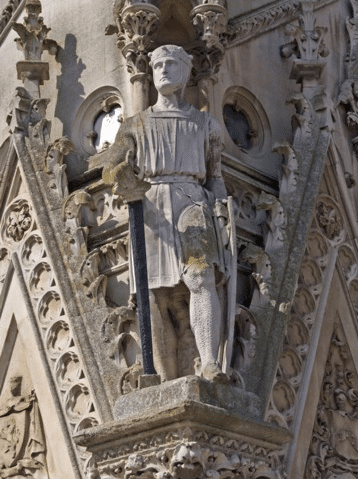 Simon’s financial problems seem to be at the heart of a deterioration of the relationship between Simon and the King. His saving grace was probably his skill as a military leader. When in the 1240’s King Henry III set off to recover his lands in Poitou he used Simon and his French contacts to spearhead the campaign. It was not a successful campaign and yet it seemed that Simon’s leadership elevated him in the King’s eyes and on his return he granted him custody of Kenilworth Castle and allowed Eleanor an income from her deceased husband’s estate.

At this point it is fascinating to explore the Pipe Rolls of King Henry III project which throw a great spotlight on the events of this period, far better than we could illuminate here. So take take to read what was in the pipe rolls by clicking here.

What the pipe rolls reveal is the power of Simon de Montfort as he builds up his estates.

Simon as Governor of Gascony

In 1248 King Henry appointed Simon as Governor of Gascony where there was great opposition to English rule. De Montfort brought his own ‘negotiating’ style to subdue the Gascons. He imprisoned the dissenters without trial and confiscated their lands. His actions resulted in a complete revolt in which King Henry tried to intervene. He faced an investigation into his behaviour but was exonerated. King Henry knew he was faced with an out of control baron who was daily becoming more powerful but he continued to need Simon’s skills and contacts in dealing with the French.

This seemed to be a turning point for Simon de Montfort as he saw King Henry as an increasingly weak King towards whom he was showing increasing contempt.

The Provisions of Oxford 1258

King Henry summoned another parliament in order to raise taxes for his Sicilian campaign and his campaign against Llewelyn ap Gruffydd of Wales. A group of barons, of which Simon was one, were determined to act. They confronted the King at Westminster and forced him to agree to a reform of the realm by 24 men, half chosen by the barons, half by the King. A parliament summoned to Oxford in June was to start the work of reform. They established a new constitution, the Provisions of Oxford and they appointed a ruling council of 15 which was to choose ministers and control the Government. Parliament was to meet 3 times a year. Power and authority would henceforth stem from the community of England, from oaths of loyalty sworn at Oxford, including oaths from the King and his heirs.

Simon de Montfort’s power base grew rapidly, until by 1263, he was all but ruling England.

King Henry III like King John before him had no intentions of adhering to any demands made in the provision of Oxford. He turned to his friend King Louis IX and through him and the Mise of Amiens 1264 had the Provisions declared invalid.

Prince Edward, now de Montfort’s most formidable antagonist fought with Simon’s army at Lewis. The battle was a victory for de Montfort and King Henry and Prince Edward taken prisoner. Simon now ruled for a year. It was an unstable rule as the major barons were now against him.

The seed of the House of Commons

Possibly in order to show a more united country, de Montfort summoned to his parliament of 1265, knights of the shires and two representatives from each town who were behind his cause. In reality de Montfort was dictator who destroyed all around him who disagreed with him and his ideals.

On the 4th August 1265 Prince Edward’s troops trapped de Montfort’s army in a curve of the river Avon at Evesham. Montfort knew that the end had come and in a few hours it was all over, Simon’s body hacked in the most brutal way, testimony to just how loathed he had become.

And so this great autocratic, fanatic, a dictator gave us the perhaps the most democratic of all of England’s standards, the beginning of the ‘House of Commons’

Green Seats of the House of Commons Westminster

Find out more about the Plantagenet period as a precursor to the deep divisions that would lead England to suffer 5 kings in 25 years, it can be argued that these troubles at east start to bubble with the self-interested actions of Simon de Montfort