Crossbones Graveyard in Southwark pays tribute to those who have, historically, lived on the margins of society. 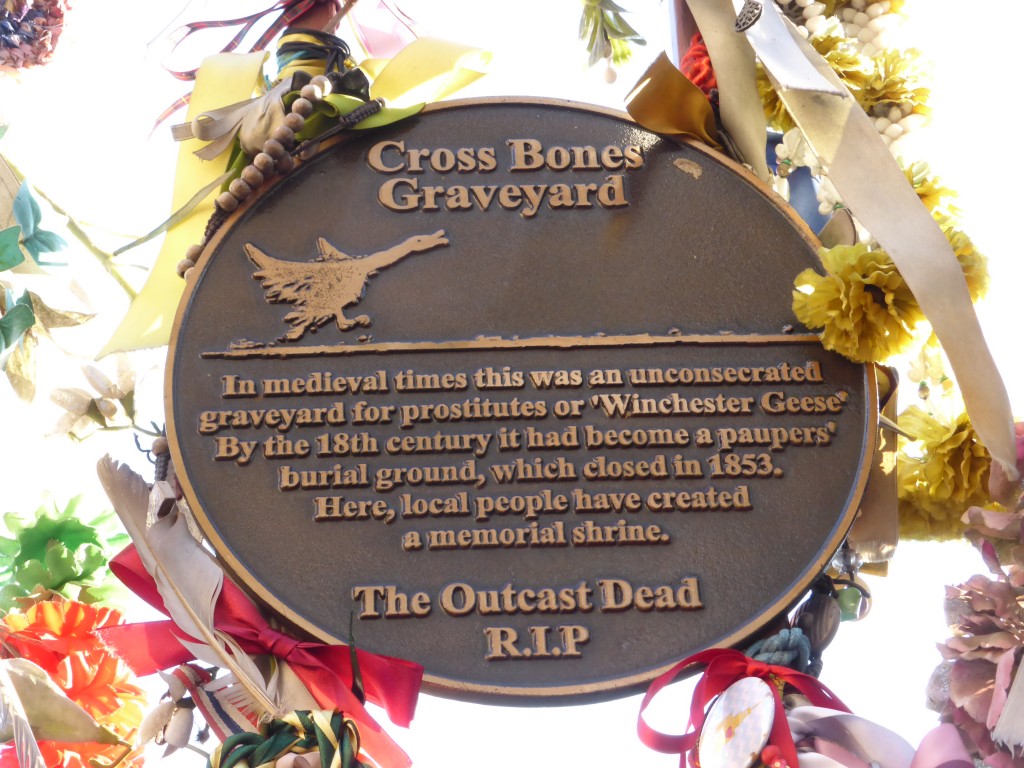 The Crossbones Graveyard in Redcross Way, Southwark London, was an unconsecrated graveyard for prostitutes and others who lived on the margins of society. The site was uncovered by archaeologists from the London Museum in the 1990’s and revealed a graveyard estimated to contain about 15,000 prostitutes and others, representing it is thought, around 800 years of burials.

The iron gates have become a shrine for todays visitors to remember others who live on the margin of society forgotten.

I have heard of ancient men, of good credit report that these single women were forbidden the rites of the church, so long as they continued that sinful life and were excluded from Christian burial if they were not reconciled before their death. And therefore there was a plot of ground called the single womans churchyard appointed for them far from the parish church.
John Stow 1598 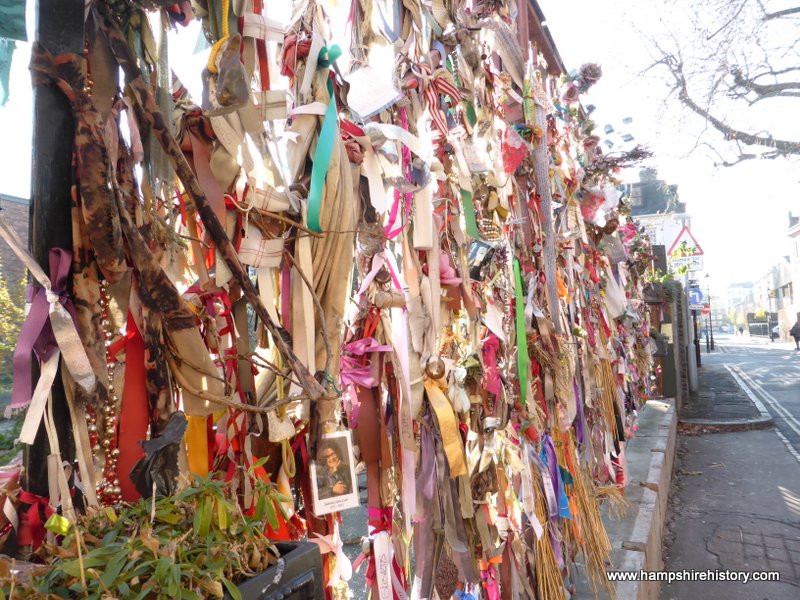 Tributes tied to the railings of Crossbones graveyard

But how come Crossbones cemetery is here, on the southbank of the River Thames?

The River Thames in Medieval London formed a boundary of propriety, behaviour, and acceptance. The City of London sat on its north bank, an ancient bastion, with its city walls and great gates.

The only fixed river crossing was London Bridge, completed in 1209. Its presence probably contributed to the growth of Southwark as a place that supplied the city with goods and services. Close to but kept separate from, those who lived and worked within the confines of the city walls by the river.

Southwark consisted of various parts, the Guildable Manor, at the bridgehead, Winchester Palace, the home of the Bishops of Winchester in the western Manor of the Clink, Paris Garden beyond, Thomas’ Hospital in Great Liberty and Bermondsey.

The south bank was an area of marshland, with little streams running down into the Thames. This made it a suitable place to create fish ponds and bath houses. On the Bishop of Winchester’s manor the fish ponds and the bath houses became known as ‘stews’. 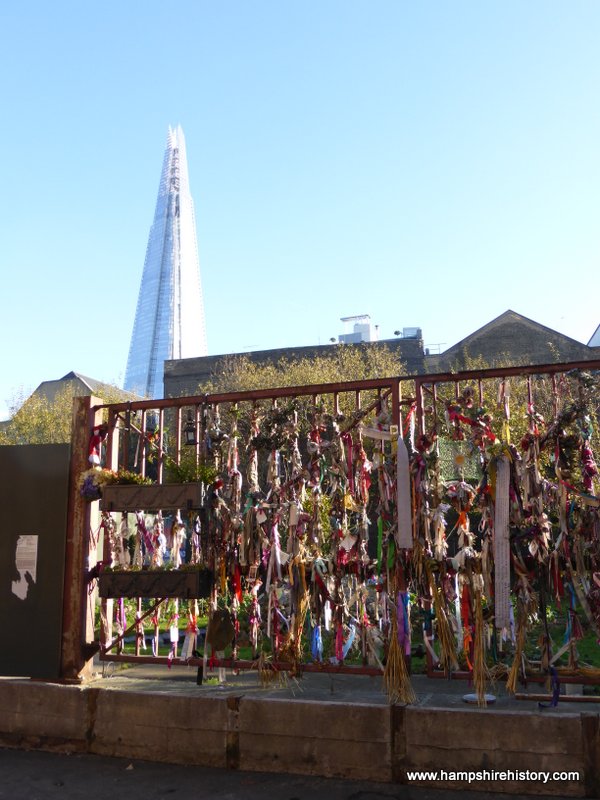 Crossbones graveyard with the Shard in the background

The area of Southwark provided the city with everything it needed, including brothels and by the end of the 14th century, the stews no longer referred to the fish ponds and the bath houses but to the brothels that had sprung up throughout Southwark.

The City of London had strict restrictions on whores and brothels. Outside of its jurisdiction in Southwark, the bathhouses could extend their services without much interference. The control of them passed into the hands of the Bishop of Winchester, who better to trust? as they had ecclesiastical authority over the whole area.

The Bishops happily did business with the brothel owners, collecting fines and rents from them.

The poor women who were prostitutes became known as ‘Winchester Geese’ because of this association.

Southwark teemed with the less salubrious of trades, tanners, brewers, river men of all kinds, visiting sailors. Taverns, theatres, cock fighting, bear pits drew people here for pleasure and sport. It was an area where criminals and the morally dubious could feel at home and at its centre were the Bishops of Winchester.

Several of them carried signs of syphilis on their skeletons and many of them were young scarcely more than girls. The church refused them burial in consecrated ground and so their young bodies were placed in the Crossbones graveyard, along with paupers and others living on the margins of society. 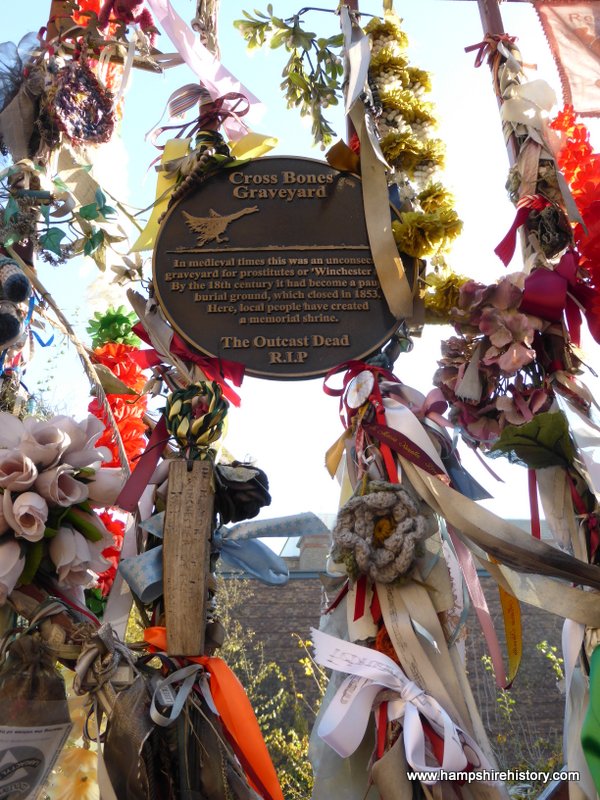