2d of oysters a day for Hodge the cat. Dr Johnson used to go out himself to buy oysters for his cat Hodge. Oysters, whelks and liquor go together, at least they used to on the stalls in the streets of London. Oyster shells in their hundreds of thousands turn up in old refuse pits, oysters were the food of the poor, needing no cooking and full of protein. 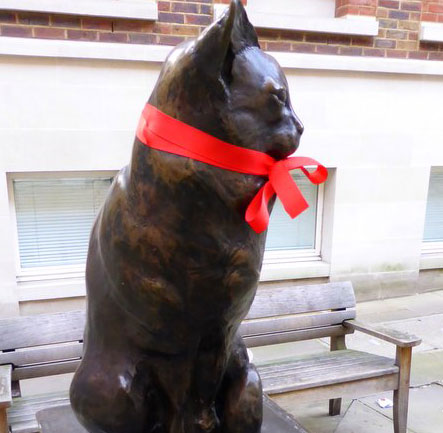 Dr Samuel Johnson, (1709 – 1784) became a great lexicographer but his writing career began as a hack writer, he moved job and house many times but when he settled in Gough Square London, he stayed for eleven years and shared it with his cat Hodge. Hodge was there to soothe Samuel Johnson as he toiled away on his great dictionary. Cats can be restful companions for writers, whose life is often a solitary one.

He describes the cat thus in his dictionary but if he were to describe Hodge it would be with far more tenderness than the stark entry we have here.

‘A domestick animal that catches mice, commonly reckoned by naturalists the lowest order of the leonine species.’
Samuel Johnson’s Dictionary

How is it that we even know about Samuel Johnson and Hodge?

‘I never shall forget the indulgence with which he treated Hodge, his cat: for whom he himself used to go out and buy oysters, lest the servants having that trouble should take a dislike to the poor creature. I am, unluckily, one of those who have an antipathy to a cat, so that I am uneasy when in the room with one; and I own, I frequently suffered a good deal from the presence of this same Hodge. I recollect him one day scrambling up Dr. Johnson’s breast, apparently with much satisfaction, while my friend smiling and half-whistling, rubbed down his back, and pulled him by the tail; and when I observed he was a fine cat, saying, ‘Why yes, Sir, but I have had cats whom I liked better than this;’ and then as if perceiving Hodge to be out of countenance, adding, ‘but he is a very fine cat, a very fine cat indeed.’
The Life of Samuel Johnson 1799 James Boswell

Hodge was deserving of his oysters and is remembered today by a fine bronze statue in Gough Square, sculpted by Jon Buckley. Hodge sitting on the dictionary with two oyster shells at his feet.

He must have been a very well known and highly regarded cat as the poet, Percival Stockdale wrote; An Elegy on the Death of Hodge.

Who, by his master when caressed
Warmly his gratitude expressed;
And never failed his thanks to purr
Whene’er he stroked his sable fur. 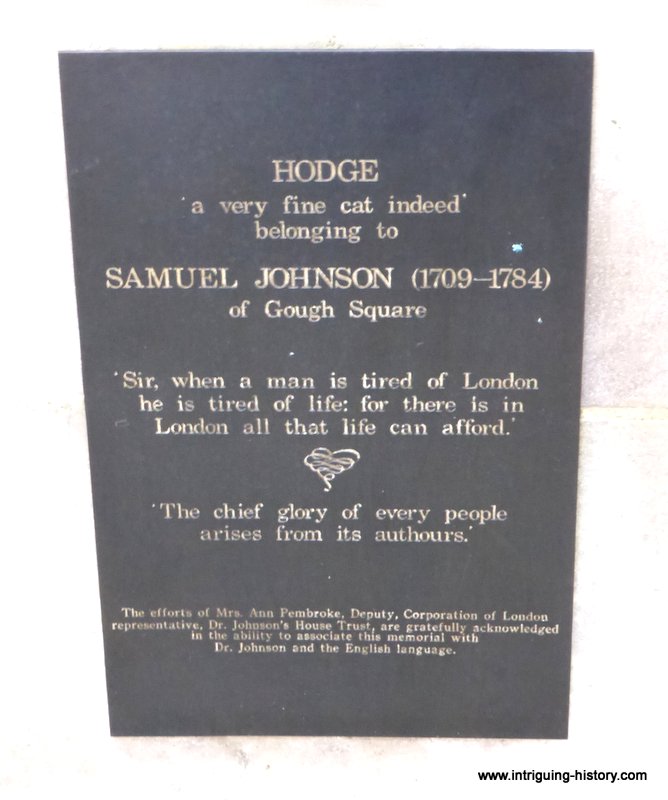