The Great Fire of London 1666 raged for five devastating days

Most people have heard of the Great Fire of London 1666, it grips the imagination and so it should, it was the most devastating fire, in terms of destruction than any since. Not even the terrible Blitz of London destroyed as many buildings.

King’s Bakehouse in Pudding Lane, the location synonymous with the seat of the fire, still attracts visitors from all over the world. 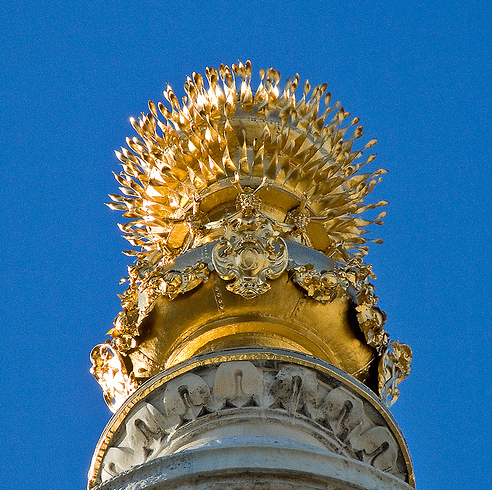 The Monument for the Great Fire of London at Pudding Lane

What do we know about London before the fire? A surprising amount of detail is contained in contemporary writings by people such as Pepys and Evelyn and from parliamentary papers where the city is described in contextual terms. Documents such as Hearth Tax returns tell us about the size and range of buildings.

London before the fire

It was a small urbanized area of 375,000 souls in 1661, of whom over a fifth died of the plague in the year before the great fire. It was a congested, cobbled together city, with insanitary living conditions created by the filth from slaughter houses, industrial processes and human waste, all of which found its way onto the streets. 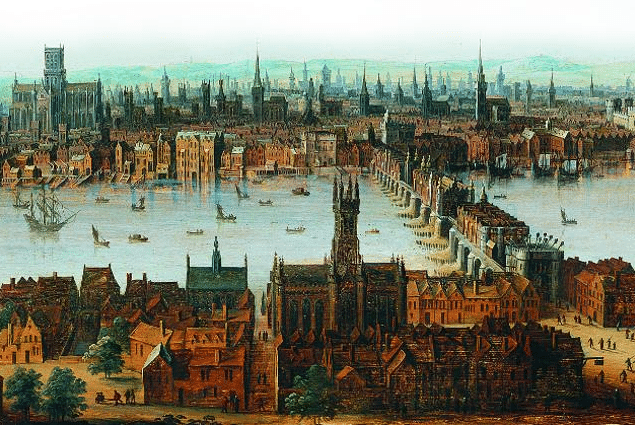 London in about 1660 before the Great Fire

It was a city that had just witnessed the execution of an English king, Londoners stood for Parliament and so it was an uneasy time in the city after the restoration of King Charles II in 1663. King Charles himself felt unsettled in the capital, which very possibly orchestrated his behaviour after the fire.

Around the country there were agitators and revolt and demonstration were common. The bubbling cauldron of Puritan and papist sentiments was constantly close to boiling over.

Life and industry had spilled out from the confines of the city walls themselves, to the east and north the artisans plied their trade, to the west, the luxury villas were built. In the city itself, churches, public buildings and homes jostled for space in streets, alleys, lanes and yards. Space was so tight that the buildings were stacked higher, timber on timber in a higgledy – piggledy fashion. The wharves were stacked with fuel, coal and other sulphurous materials, getting ready for the onset of Winter. Any fire, with an easterly wind could wreck havoc through the timber built city.

Fire was not uncommon in the city, it was up to the population, under guidance from the constables and beadles to put them out. Grappling hooks were used to drag timber frame buildings to the ground, to create fire breaks but of course it depended on people getting to the fire fast enough in order to control it.

Many wrote of the visions people had had concerning the fire itself but for all of these a real plot to burn the city was uncovered in April 1666. There were many Parliamentarian plots at this time but this one, called the ‘hellish design’, included setting fire to the city. Ironically the date of the attack was set at 3rd September 1666, the anniversary of Cromwell’s death. The leaders were caught arrested and executed but their leader, Robert Danvers, escaped.

Of course rumours flew that the fire was set by Papists but it wasn’t.

Too conclude then, London in September 1666 could be seen as a virtual and real tinderbox, any spark at any time could have set the whole ablaze and very sadly it did in the early hours of Sunday 2nd September.

The summer had been hot and dry and the houses creaked with dry joints. The wharves were packed with combustible goods, pitch and tars, coal and timber. To the north of the quayside in Pudding Lane, a small fire set itself in a bakehouse. The fire was discovered at about two in the morning, the city was asleep and slow to react when the alarm was raised. A brisk east wind whipped down the Thames and despite the efforts of those who stirred themselves this fire took charge and jumped the firebreaks.

At one in the morning, there happened to break out a sad deplorable fire in Pudding Lane, near Fish Street Hill, which was falling out at that hour of the night, and in a quarter of the town so close built with wooded pitched houses, spread itself so far before the day….to be mastered….a violent easterly wind formented it and kept it burning all that day and the night following.
London Gazette No 85

King Charles arrived to inspect the scene and ordered the Duke of York to place his troops and take control of the city. People were panicking, grabbing their belongings and desperately moving towards the river to place themselves and their goods on barges. The troops were in place to try and prevent looting and riot.

St Pauls was destroyed as was the Guildhall, gun powder saved the Tower of London.

By Tuesday night the wind had dropped and the firefighters began to gain control of the fire. Over the next few days they brought it under control and on Friday it had been extinguished.

London lay stretched out, a black smear on the north bank of the river.

The fire was recorded in several journals, click here to read the full account of Samuel Pepys and the Great Fire but this is what he has to say about the start of the fire.

Jane called us up, about three in the morning, to tell us of a great fire they saw in the city. So I rose and slipped on my nightgown and went to her window and thought it to be on the back side of Mark Lane at the farthest but being unused to such fires as followed, I thought it far enough off and so went to bed and to sleep.
Samuel Pepys

John Evelyn, a scholar also gave a vivid account of the fire.

‘the stones of St Pauls flew like grenades, the lead melting down the streets in a stream and the very pavements of them glowing with fiery rednesss…’
John Evelyn

And so the City of London needed to be re-built and within five years, a great deal had been achieved but what became of the people displaced and how was such a plan formulated to replace up to 13,000 houses and churches and public buildings?

Visit for further posts on the re-development of London. 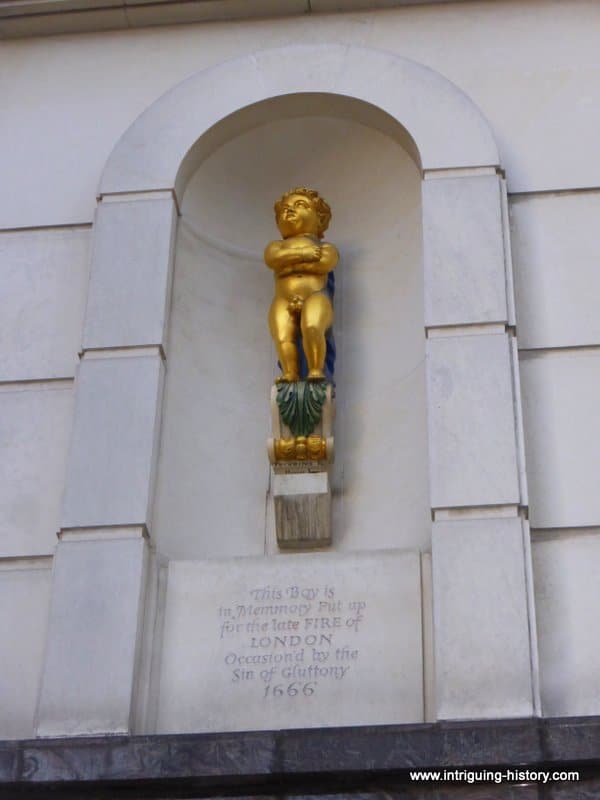 The Golden Boy of Pye Corner where the fire was halted 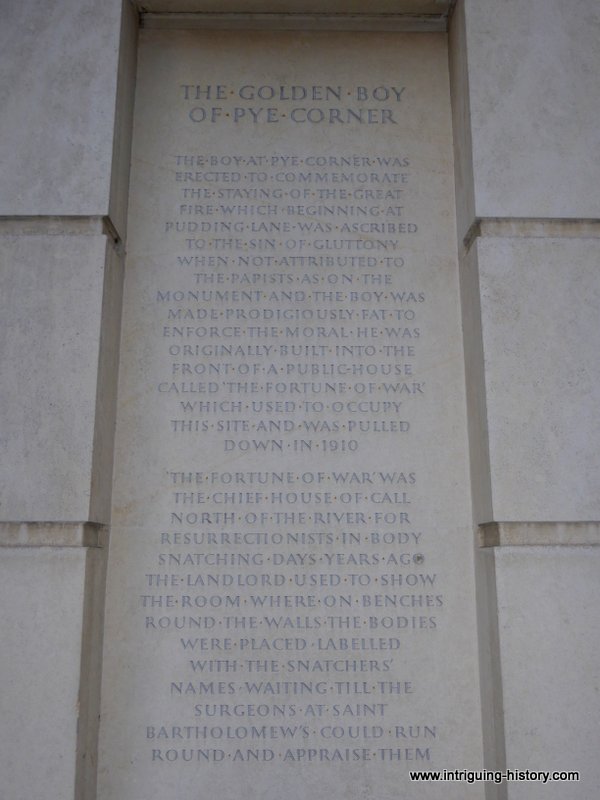 The Golden Boy of Pye Corner