Flying shuttle – What is it?

Flying Shuttle What is it?

Many of us will have studied the Industrial Revolution at schools and heard of the ‘Flying Shuttle’. Well what is it and why was it such an important invention?

The Flying Shuttle a key tool of productivity during the Industrial Revolution (and if you want more facts and thoughts about the Industrial Revolution click here) .A single person operating a loom from home, could only produce a piece of cloth that was as wide as their outstretched arms because they had to be able to throw the shuttle, carrying the weft, the horizontal yarn, through the waft, the vertical yarn and catch it. If wider cloth was needed it took two or three people to throw the shuttle. The process of making cloth therefore had limitations, both in the cloth width produced and the speed of production. 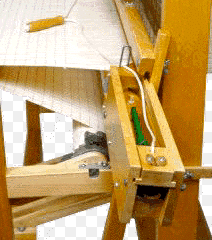 The box that contained the flying shuttle

In 1733 a fellow named John Kay, from Bury in Lancashire patented an automated shuttle that, through operation of a lever, threw the shuttle through the  waft at a tremendous rate.

The shuttle, with the weft wound onto it, was placed in a wooden box which contained a sliding hammer, which in turn was attached to a cord. The weaver pulled the cord and the hammer slammed into the shuttle shooting it across the waft at a terrific speed (imagine hitting an ice puck). To make the shuttle move even faster. a small modified roller was attached to the shuttle and the shape was made more aerodynamic and capped with metal ends.

The shuttle was then caught on the other side in another box and brought to a halt with leather straps and the process repeated. Unfortunately sometimes these straps broke and people were seriously injured by these shuttle missiles. 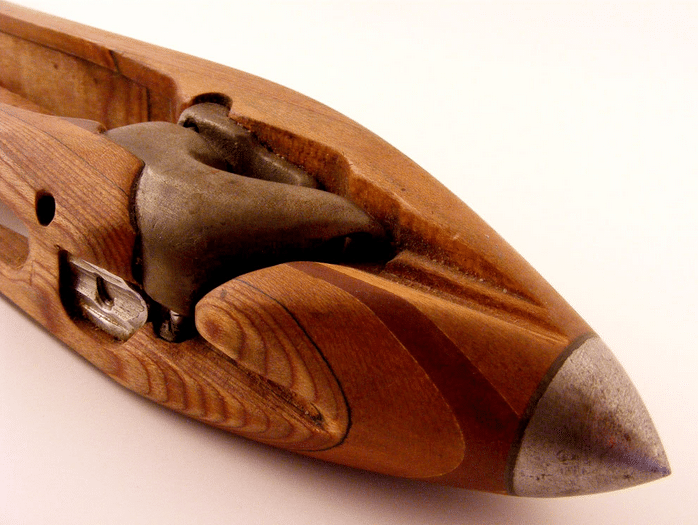 A single person could produce broad pieces of cloth very quickly. The speed of the operation meant that there was soon a shortage of thread and so it stirred others,  who saw an opportunity to make money, to develop new spinning machines.

A revolution was born.

Read more about John Kay in another post. Such an invention should have launched him successfully into business, as it was he fought ignorance and greed at every turn.

And if you Googled ‘Flying Shuttle’ I bet you got a picture of this, there’s a reason for it:)

From one flying shuttle to another