1825 Invention of the electromagnet

In 1825, Lancastrian electrician, William Sturgeon, revealed his invention of the electromagnet. This enabled electrical energy to be used in the design of controllable machinery.

Sturgeon was an amazing man

He had a difficult start to life, his mother died when he was quite young and his father sent him away to become apprenticed to a boot maker. Life didn’t become much easier when he joined the army.

He was sent to the Royal Artillery base in Woolwich and married a widow who kept a local shoe menders. But sadness followed him and all three of his children and his wife died. He immersed himself in self education, teaching himself mathematics and a range of languages including Greek. He also studied science and philosophy and honed his practical mechanical skills.

The army sent him to Newfoundland and whilst there observed many thunderstorms which inspired a fascination with electricity.

Although he left the army, William Sturgeon had made connections with many people who thought like him, the Greenwich Royal Observatory was only a stones throw away and the Royal Military Academy trained the Royal Artillery and the Royal Engineers.

In 1824 he was appointed lecturer in Science and Philosophy at the East India Royal Military College and lecturer in science at the Royal Military College and by 1825 was able to show his first working electromagnet but he didn’t stop there. In 1832 he built an electric motor and invented the commutator, an integral part of most modern electric motors. He lectured at the Adelaide gallery for practical science, patronized by people such as Thomas Telford. He also invented the first suspended coil galvanometer, a device for measuring current. As a result of his work, the American inventor, Joseph Henry, produced a far more powerful magnet which led to the development of an electronic communication system, the telegraph. 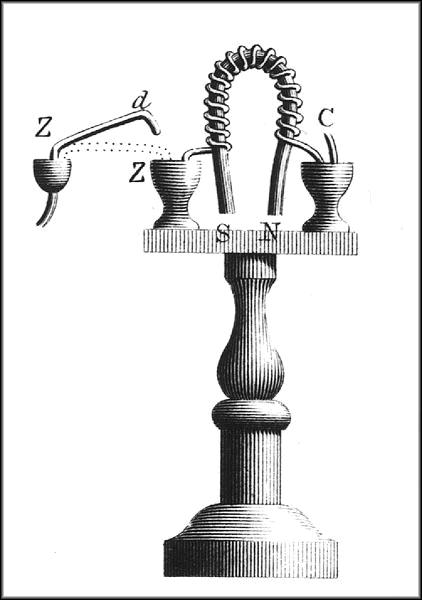