Hedy Lamarr Actress and Intriguing Inventor, could have been the inspiration for the origin of the phrase ‘much more than just a pretty face.’  Hedy was an enchanting and charismatic film star. Her beauty however was just one of her assets and belied her intelligence. 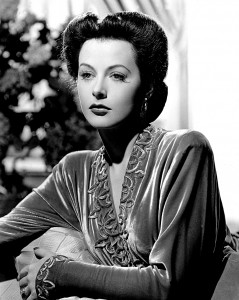 Hedy Lamarr beauty and brains a film star and inventor 1942

In the ruthless business climate of Hollywood where looks ruled and acting ability, never mind intelligence was only a secondary consideration Hedy Lamarr seems to have something to contribute on all fronts. Hedy Lamarr, was discovered by Louis B Mayer and became best known for her screen roles she emigrated to the US in the 1930’s but she was also a gifted inventor.

In 1997 Hedy Lamarr who died in 2000 was given a Special Award by the Electronic Frontier Foundation for her contribution to her co-invention of spread-spectrum broadcast communications technologies  which were subsequently implemented in Wi-Fi, CDMA and Bluetooth technology. In 2014 she was inducted posthumously into the US  National Inventors Hall of Fame. Her real name as opposed to theatrical name (stage name) was Hedwig Eva Maria Kiesler. She was born in Austria, the daughter of a wealthy Austrian banking family.

“In 1942 Lamarr, once named the “most beautiful woman in the world” and Antheil, dubbed “the bad boy of music” patented the concept of “frequency-hopping” that is now the basis for the spread spectrum radio systems used in the products of over 40 companies manufacturing items ranging from cell phones to wireless networking systems.”

EFF Citation in 1997 following the campaigning of online activist Godwin.

” The judges for the sixth annual EFF Pioneer Awards were: Hal Abelson, Professor of Computer Science at the Massachusetts Institute of Technology; Karen Coyle, librarian at the University of California and president of the Berkeley chapter of Computer Professionals for Social Responsibility; Bruce Koball, technical consultant and one of the organizers of the Computers, Freedom, and Privacy conference; Simona Nass, founder of the Society for Electronic Access and board member of the Voters Telecommunications Watch; Peter Neumann, principal scientist at SRI International; and Mike Godwin, staff counsel for the Electronic Frontier Foundation, who coordinated the judging process.”

It took until 1997 to honour the hugely significant work of Lamarr and Anthiel. Lamarr became the first female to receive the Gnass Spirit of Achievement Award, the Oscar award for invention. Her comments “It’s about time.”  Sadly in later years having struggled with failing looks and experienced disasterous outcomes from cosmetic surgery and a troubled personal and family life she had largely withdrawn from public interaction and was a virtual recluse. Even with her own children her communications were largely restricted to the telephone. A sad conclusion to a packed life and mind that was obviously capable of great invention. Her co-inventor had died by the time of the EFF award and final recognition for the importance of their work. But what a fantastic achievement it was and what shame ti too the best part of another 40-50 years for its promise to be fully realised.

More to explore about Heady Lamarr and other Intriguing Women

Hedy Lamarr featured in this film helping to sell US War Bonds during WW2: