Caroline of Ansbach was the wife of King George II

Caroline of Ansbach played an extremely important role in the reign of King George II. She was a striking individual, her large blond features were described as earthy and sensuous and she had a quick and astute intelligence.

She was artful in her manipulation of her husband George and other important men of the time. As Prince and Princess of Wales, she was determined that they would establish themselves in a court to rival that at St James. She used this lively court to surround herself with various intellectuals, those who could help her to get her opinions aired in a wider world, were particularly welcome. During the period when she was Princess of Wales, she placed herself between the hostility and vanity of King George I and the rather huffy conceit of her husband, the Prince. She created  a circle of her own in which intellectuals and clerics debated the latest ideas. She appears happy to have left them to their literary devices, her own letters of note were somewhat crude and clumsy but it didn’t seem to matter to her. She enjoyed the conversation around philosophy and religion, maybe the more extreme the better. There was perhaps, a desire to shock or surprise. She had her two daughters, Amelia and Caroline, inoculated against smallpox, following the return to court of Lady Mary Wortley Montague after her exploits in Turkey. This was before it was safe or fashionable to do so. 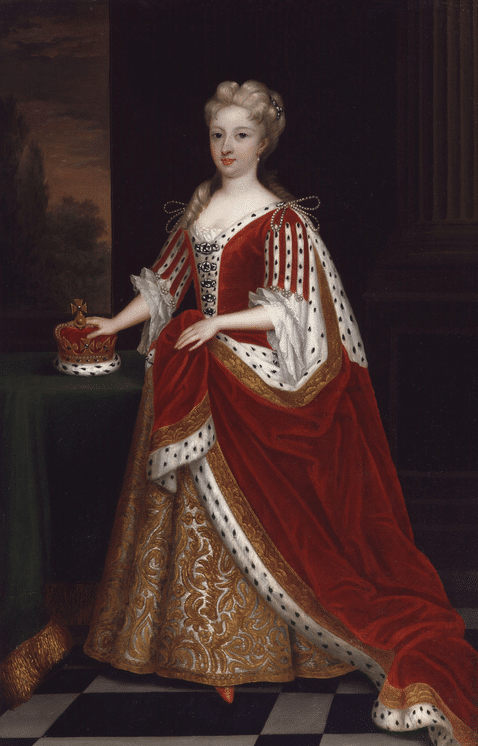 Her husband George was not interested in intellectual pursuits and thought she spent too much time being a scholar rather than a queen. As a couple they struggled to find common interests but she grew more intellectually strong. She met with notable theologians such as Butler, Clarke and Berkeley and her friendship with Leibnitz, the German polymath and philosopher.

The Prince and Princess of Wales lived at Hampton Court where they had an opulent bed chamber built to receive courtiers at an early morning meeting called the levee. Their portraits were painted on the ceiling. However following a row with his father, they were banished from the royal palaces and separated from their children. Given that both parents had taken a violent dislike towards their eldest born son Frederick, such a move can only have estranged them still further. This move though, did not prevent Caroline from gathering those intellectuals around her. The extent of her hatred for her son seems odd though. . On one occasion she remarked to Walpole;

Harsh words by a mother of her son. Her whole manner towards him does not seem to fit the calm, reasoned woman she was portrayed as. Caroline and George were equally horrible to Frederick’s young bride, Augusta of Saxe – Gotha. 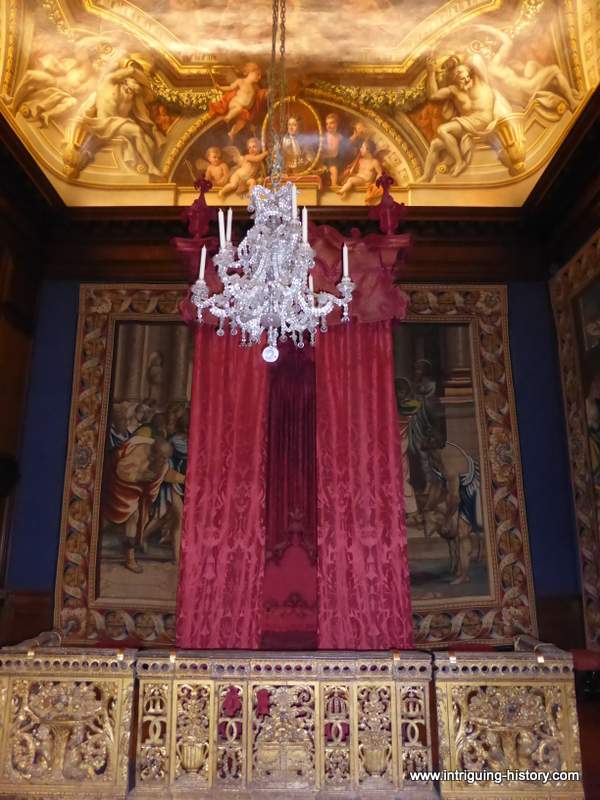 Caroline had a complicated relationship with her husband King George II

When King George I died and the Prince of Wales became King in 1727, the exciting court life Prince George had carved out for himself and his wife seemed to fall flat. George decided to pursue a strict economic stance and the parties the couple had held would be a thing of the past. Caroline continued to gather intellectuals to her bosom, King George, mistresses.

Caroline was sensible enough to ignore his affairs and he in turn seemed to need her calm reflection even though at times he was infuriated by it. He had a string of mistresses, his son Frederick said of him;

‘he is an obstinate, self – indulgent miserly martinet with an insatiable sexual appetite’

When George went to Hanover to acquire a new mistress, he returned with Madame von Walmoden and wrote to his wife Caroline;

‘you must love the Walmoden, for she loves me’

What a bizzarre and difficult state of affairs for any wife to endure.

Caroline however saw an opportunity to use King George to shake out some sort of power base for herself. She formed an alliance with the politician Robert Walpole. They had a symbiotic relationship, Walpole used Caroline to drip feed political ideas to the King. Caroline used Walpole to gain a powerful say in politics. Walpole was supposed to have boasted’

‘I took the right sow by the ear’

Meaning he chose to nurture his relationship with Caroline, rather than waste time with the King’s mistress Mrs Howard, Caroline having more influence. Just how much influence she had is a matter of conjecture but she certainly lived her life delighting in the possibility of affecting decision making.

The sadness of King George when Caroline died

Queen Caroline died in horrible pain. Her illness lingered on and King George was beside himself with anguish and grief. When she died in November 1737, he is said to have remarked, that he had known many women but had not known one who was fit to buckle her shoe and that most surely is the remark made of someone he truly admired and loved.