As the Queen starts her journey around Britain as part of her Diamond Jubilee celebrations, we thought it would be interesting to take a look at the history of some of the more iconic symbols of Monarchy and National pride. 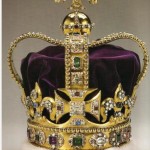 Oliver Cromwell felt that the Crown Jewels were so symbolic that he took the whole lot to the Royal Mint and had them melted down.
A new set of Crown Jewels was created for the coronation of Charles II by Robert Vyner.

It is made of solid gold and weighs 4lb 12oz and is set with 444 precious stones.

The opening sequence of the video clip shows the crown in all it’s glory and then in the coronation of Queen Elizabeth II.