The British Square – a Legendary Symbol

The British Square, used in the Napoleonic and Sudan War. 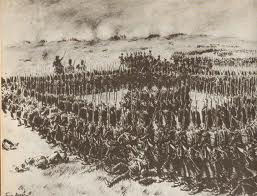 The British square was a fighting square used as a means of defense during the Napoleonic Wars.

Thus, when, at the Battle of Abu Klea, during the Sudan Campaign of 1885, the British Square was broken, it sent shudders of disbelief through the British Government, Army and it’s people.

The impact of the broken British Square led to a clarion call for patriotism and the poem ‘Play up! and Play the Game’ by Sir Henry Newbolt was written in response.

Red with the wreck of a square that broke; The Gattling’s jammed and the Colonel dead

The lines, ‘Red with the wreck of a square that broke; The Gattling’s jammed and the Colonel dead’, refers to the penetration of the square at Abu Klea when the British forces parted to bring out a machine gun that then jammed , allowing the Sudanese troops to attack.

The newspapers were full of outrage and so were the public.

The British Square broken in Sudan

Such symbols of British supremacy were vital at this time when the British Empire stood at it’s height. We were upon a mighty pedestal, with a very long way to fall.