May 30, 2013 / Comments Off on The Agricultural Revolution

The Agricultural Revolution in Britain

In Britain’s history we refer back to the Industrial Revolution but rarely reference the Agricultural Revolution. What factors contributed to it? What were the major advances, inventions, challenges and their impact on British society in the 18th and early 19th centuries?

You will find a hand reference here to the timeline chronology and key dates and events relating to the Agricultural Revolution in this article, scroll down to view. For our broader Agricultural and Industrial Revolution Timeline  and theme click here

Do the facts support the stories of these great agrarian heroes or is it time to pause and reflect?

Many history books seem to settle on the century that follows, the 18th Century, as being the one in which the Agricultural Revolution took place. This is due in part to a book written by G. E. Mingay and J.D Chambers,‘The Agricultural Revolution 1750 – 1880’. Mingay asserts that in this time period, the agricultural progress, was a technological revolution that raised the productivity of the land substantially. Many other writers illustrate the point by drawing on individuals and their inventions, even if some of their ideas were far from revolutionary or effective. So what other factors were in the mix at the same time? The parliamentary enclosure of land was probably the most significant of these.

What was Parliamentary enclosure of land? 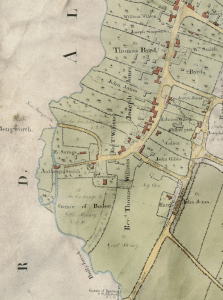 An example of enclosure maps

Enclosure was a way of making sure land was consolidated into a field system that could be more economically and efficiently farmed. These fields were then either held and farmed by individuals or rented out to other individuals or groups of people. It was done initially through informal agreement and had been taking place in England since after the Norman Conquest. Who was deemed to have rights over the land was a point over which many arguments ensued.

It led to a land owning system in England, in which the extremes of who owned land and who did not were polarized. To this day only 0.06% of the population own the land in England and this figure has its roots deep in the early history of enclosure.

Enclosure created an open battle field with supporters on one side and dissenters on the other.

The beneficiaries of land under enclosure thought it a jolly good thing, those who had been dispossessed of their land, their families starving and any chance of producing an income taken away, did not.

The government though it a good thing, since they made up a large part of the land owning minority, that is no surprise. During the C17th, enclosure could be authorised by an Act of Parliament and this became established as the norm.

The English landscape as a series of enclosures or fields was created during the 150 years from 1750. An estimated 6.8 million acres were enclosed under the original Act.

There is little doubt that enclosure greatly improved the agricultural productivity of farms from the late 18th century by bringing more land into effective agricultural use. The extent to which it forced people off the land to seek work in urban areas is open to debate but enclosure PLUS agricultural advances had the combined affect of creating a maelstrom of change.

What agricultural improvement, changes advances and challenges were happening in this period 1750 onwards?

What changes and improves, what challenges and shifts in society were happening that influenced and contributed to the Agricultural Revolution

Thanks to the Internet archive from an 1859 article in Canada shows how his word and ideas were spread some 16 years after he first introduced the concept.

” John Bennet Lawes, the owner of the Rothamsted Estate, appointed Joseph Henry Gilbert, a chemist, as his scientific collaborator. As a young man, Lawes had been interested in the effect of fertilisers on crop growth and, in 1842, started the first factory for the manufacture of artificial fertilisers. Lawes was not only a successful entrepreneur, he was destined to become one of the great Victorian scientists.” Rothamsted Research

Agricultural Revolution and boom, guess what happens next?

Following a sustained period of growth and relative success in terms of overall economic benefit to the nation as opposed to the common man, you can probably start to guess what happens next. In the period between 1873-1914 the threat to British Farming caused by the Repeal of the Corn laws becomes a vivid reality. This period has been termed, arguably, the Agricultural Depression.

International trade and farming became a competitive issue as the Railways and Steamship opened-up the American Prairies to allow the importation of cheap grain into Britain. This threat was compounded with the invention of refrigerated holds on cargo ships which opened the path for New Zealand and Argentinian Farmers to export meat to Britain. By 1895, one third of all meat consumed in Britain was imported.

What of man himself toiling in the fields?

There seems to be an area of study about the agricultural revolution that deserves more study, the capacity of the worker to work more efficiently. Whatever the debate about enclosure it brought with it a farming system, still in place today. Land owner, farmer and farm labourer collected under one more efficient authority. Farm size increased and the advances discussed above meant an increase in output per worker. It has been suggested that from about 1650 through to the middle of the 18th Century that output increased by as much as a third. Although enclosure also put much farmland under pasture and therefore crop yields fell. But the overall picture was never really favourable to the man toiling in the fields. There was genuine fear across the countryside that not only would machines put workers out of a job but with a repressive Poor Law and little  or worse social welfare provision by the state, the workers and their families could still starve. These issues had a long way to run yet, the Industrial Revolution might improve and reduce the cost of production but again the workers would and were being exploited, the lot of the poor had not improved much despite the progress of both the indusrial and agricultural changes that had taken place.

A better fed population were able to work harder and sustain longer hours of hard labour, so yes, several hundred years of agricultural revolution certainly made the latter possible and the need to maintain food production stimulated invention, drills, threshing machines, ploughs and steam tractors all added to the mix.

No one aspect of change created either the Agricultural or Industrial Revolution. It was a series of connected events over centuries, pushing and pulling by Government, stark choice and demand that fueled events. Defining either as a separate or a whole revolution would be an inaccurate description of a many layered and complex subject. There is a definite overlap and some individuals transfer from one to the other but with not as many workers needed in the fields, certainly the supply of labour was increasing.

When supply exceeds demand, we all know what happens and it did, the average workers wages were just even more under pressure and it is hardly surprising that there would be a move towards redressing the inequalities that existied in society as another century starts and Agiculture seeks to crawl its way out of recession.