A visit to any church in England reveals a plethora of church seals and arms, so many in fact that most of us pass them by without much thought of the history encoded within them.

So what was the purpose of church seals and arms and how did they come about? From as early as the C6th Popes were fixing large lead seals to their edicts. It was their stamp of authority and a way of ensuring that the receiver of any document knew where it had come from.

These large lead seals were known as bullae and hence that is where the term papal bull comes from. A seal spoke of the status and importance of the sender and it comes as no surprise that within the church the greater and greater use of the seal came about as the role of the Bishop changed.

The earliest Bishops were responsible for the spiritual welfare of the church and it’s Christian community. This solely pastoral role of the Bishop within his Cathedral, gradually gave way, as the Church widened it’s influence and grip on society. Affairs of state, eclesiastical property and finances began to be as important to the role of Bishop as was overseeing his flock. The Cathedral Chapters became solely responsible for administering the affairs of the Cathedral. The role of Bishop became immensely powerful.

The rise of the C13th Bishop, what did it mean?

The Bishop had, over several centuries become incredibly powerful men in both spiritual and secular affairs.

The age of  church Seals and arms had arrived

The production of so many documents from a literate church membership came with a need to seal them and to be able to vouch for their authenticity. The art of seal engraving reached a zenith.

An array of church seals and arms evolved. The original seals had distinct characteristics. Episcopal seals were oval in shape and were carved with either the figures of saints or of the Bishop himself. Secular seals however were round.

How did church arms develop? 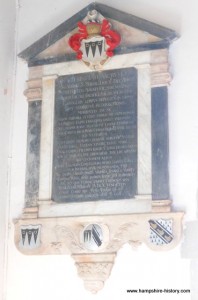 The increased use of seals coincided with the Crusades, where the knights were identified by their coat of arms worn as a tunic over their armour. It was their distinctive arms that allowed them to distinguish one from the other, the design is a symbol unique to the individual, family or institution.

By the mid C13th, coats of arms were adopted by the Church, who used them in a much more dynamic way than they did the seal. The seal could be used to mark property, the arms could be placed on buildings, monuments, flags, clothing. They could be carried or worn by servants, they were in fact an ostentatious way of saying look how important we are.

Church arms though had another important function and one that was seized upon by the Church. They realized that the coat of arms could fulfill a spiritual as well as a secular function. If they could use the arms to reflect the Glory of God and the saints then all to the good. The unity of the Holy Trinity is represented by the arms bearing say three Bishop’s mitres or three crowns. Along with this they might include St Peter’s keys or St Paul’s sword. 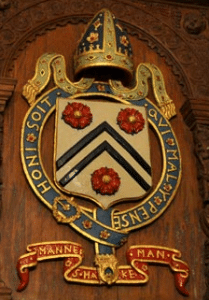 The coats of arms are drawn in code, which once you know what you are looking at, reveal a whole world of intriguing history. The memorial shown on the left, is for Dean Young of Winchester found in Exton church Hampshire. The family arms reveal a fascinating history of the family.