Royal Arms can be seen in churches throughout England but why are they there? 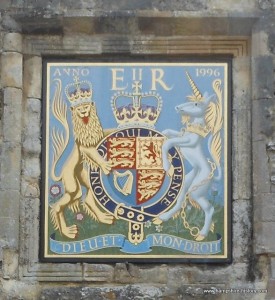 Once King Henry VIII had placed himself as head of a new church, the Church of England, then it became custom to display the Royal Arms inside parish churches up and down England. It was a very visual way for the sovereign to put themselves in front of their subjects week in week out and to remind them who now had authority over the church. It was also a reminder to any papists in the congregation that the Pope was no longer the head of the church but the King or Queen was.

Therefore after the Reformation the Royal Arms were painted on a rectangular piece of wood or cloth and hung in a prominent place for all the congregation to see. The design of the display of the Royal Arms gives a clue as to which reign they were erected and occasionally the sovereigns initial is incorporated into the overall design.

The rarer arms are those displayed from the time of King Henry VIII and Elizabeth I. During the English Civil War and the interregnum, many churches were vandalised by Cromwell’s troops and the Royal Arms pulled down and destroyed. Most of the Royal Arms that can be seen in churches now therefore relate to the period after the Commonwealth. It is interesting to note however that Cromwell chose to put up Commonwealth Arms in the churches in their place and then from 1653 the Arms of the Protectorate.

When King Charles II was restored to the throne in 1660, Parliament decided that all Commonwealth Arms should be removed and those of the King set up instead. It was not however made compulsory for the churches to display arms.

Most were painted locally and so some look a little clumsy Most of them are dark with an age of dirt, which is a shame because they would have in part served to cheer up the post reformation interiors. They are usually painted on a square board over a metre sq and hung quite high so that all the congregation could see them.

The name of the sovereign was added in some instances.

Take a look at this example from Froyle church in Hampshire. 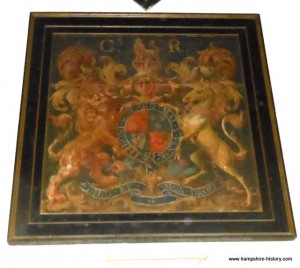 The Royal Arms are those of King George III, put up by the Lord of the Manor to show that he and his followers were loyal subjects of the crown. The various parts of the Royal Arms have a particular significance. For example, the lion to the left represents England and the unicorn to the right Scotland.