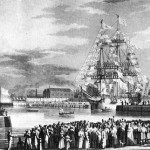 Background to the area around St Katherine’s leading up to and through the 17th-18th centuries.

Parliament decrees slum clearance and building of new docks in 1827

Parliament decided that new docks would be built, to deal with the growing amount of trade:

Tough conditions of life in Londons docklands epitomises, the lives of London’s poor

In dreadful living conditions, up to 4,000 workers a day fought for work that paid a pittance, 4d an hour, so desperate were they for work. Despite the poor pay, the docks provided an essential lifeline to the Londons poor workers.

Useful resources and sources on London’s Docklands: if you would like to find some further curated resources that will be useful re the docklands, take a look at Resources On Intriguing Family History/resources/historical context, use the links below and related posts suggested below: