In June 1162 Thomas Becket, by training as an accounts clerk to his cousin, a banker, was consecrated Archbishop of Canterbury. How did this son of a Norman merchant and an accountant come to hold such high office? 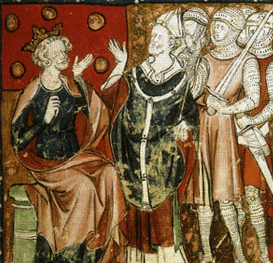 Becket’s star rose quickly, he had many skills, he was an excellent advisor and administrator and guided the King in issues of state including diplomatic and military strategies.

So the banker became a very powerful man indeed, quite what happened next is uncertain, the King’s friend, now turned on him and opposed him in every way, what caused this about face?

King Henry had considered Thomas a true and trusted friend had lifted him to this high status and therefore in the first instance was hurt and puzzled by Becket’s actions. That hurt soon turned to anger and as Thomas Becket pushed so the King began to push back and the quarrels intensified.

Thomas publically accepted these constitutions only to renounce them later.

King Henry was furious and uttered the immortal words:

“Who shall rid me of this troublesome priest?”

Four knights keen to find favour with the King travelled to Canterbury where, on 29th December 1170, they murdered Thomas Becket in the great cathedral of Canterbury.

The shock of such a murder reverberated throughout chistendom

His claim to sainthood was established  and three years later Thomas was canonized by Alexander III.

King Henry II was served with a popular excommunication, his reaction to this seems surprising. He shut himself up for three days in his chamber, rolled himself in sackcloth and ashes, and  refused food and comfort and then excluded himself from any social engagement. His fear of excommunication was very great, he sought out Becket’s murderers and begged forgiveness and reconciliation with the Pope.

He pledged himself to abrogate the Statutes of Clarendon, to restore the church of Canterbury to all its rights and possessions and to undertake, if the pope should require it, a three years’ crusade to Jerusalem or Spain, and to support two hundred knights in the Holy Land with these promises supported by those of his son, Henry was reconciled.

Two years later on July 12, 1174, an incredible event occurred, the king, depressed by disasters and the rebellion of his wife and his sons, made a pilgrimage to the tomb of Becket but it was not just any pilgrimage. He dismounted from his horse as he came in sight of Canterbury, walked as a penitent pilgrim in a woollen shirt, with bare feet, through the streets, knelt in the porch of the cathedral and kissed the sacred stone on which the archbishop had been murdered. He wept before the crypt and spoke of his remorse at uttering those fateful words. threw himself prostrate before the tomb in the crypt, and confessed to the bishops with groans and tears his deep remorse for the hasty words which had led to the murder.

What followed next is surely one of the most humiliating acts ever undertaken by an English monarch. He was scourged by the monks, abbot and bishop upon the tomb of St Thomas where he implored for forgiveness.

The truth of the relationship between these two men is probably more complex than can be envisaged. Once considered close and trusted friends, quite what drove Becket on his chosen course of action is uncertain. Certainly the power of the man must have been immense, was he simply self seeking or was his political desire to reduce the power of the monarch born out of a more altruistic stance?

After the death of King Henry, the biography of Thomas Becket was written by his close colleague William Fitz Stephen, who was present at the murder of Becket but who later became a friend of the King and was made Duke of Gloucester. Henry II built a chapel dedicated to Beckett at Dover Castle and continued to regret and seek to do penance for the death and murder of his friend and confidant.