The connection Britain has with it’s coastal waters and inland water ways is inherent in all of us.

The very life of the nation, owes itself to the waters that surround us and ships and shipbuilding have woven their way throughout much of our history. 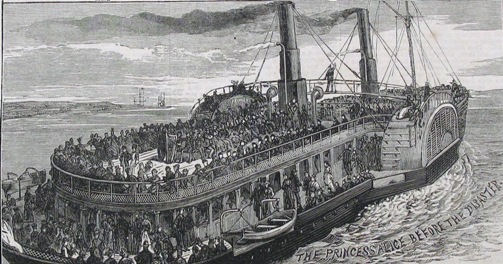 The loss of a ship has always seemed to engender a very deep emotional response in people and it was never more so felt, than after the sinking of the SS Princess Alice on the 3rd September 1878.

The consequences of the disaster were far reaching, including a review of the rules and policing of the River Thames, the legal process of dealing with mass deaths, from retrieval of bodies and identification of bodies, to inquests and burials

It still remains the highest ever loss of civilian casualties in UK territorial waters.

The list of those who lost their lives is, in itself, a vignette of British life. The mix of ages and occupations, relationships and locations, all serve to create a vivid reality of the lives of those lost.

To read a contemporary view visit The Records of the Woolwich District by W.T Vincent, on the Woolwich Ferry site, great link for some fascinating insights