The British presence in India was a result of the trading opportunities grasped by the East India Company way back at the start of the C17th. The company monopolised trade, had it’s own armies and ruled and regulated itself. 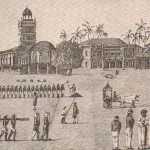 The 18th century saw an acceleration of tension between the British Government and the East India Company, until finally, the Government woke up and smelt the coffee or rather the tea  and saw that they needed to act decisively.

The East India Company Act of 1784, also known as Pitt’s Act, came about because earlier acts, in particular, the 1773 Regulating Act, designed to control the activities of the company had failed. The 1784 Act decided that a board would be set up that would have power and control over all areas of the East India Company. In effect the British Government assumed control of the company. It established Calcutta, now Kolkata,  as the effective administrative capital of all things pertaining to company business and possessions in India.

Seek out your own intriguing connections to India, my own is through Churchers College in Petersfield Hampshire. It was established in 1722 as a college where 10 – 12 local boys could be educated in all necessary fields to enable them to become apprenticed to masters of ships sailing in the East Indies.

What connections can you discover?