Secrets of Great British Castles is a new Channel 5 Documentary series presented by Dan Jones Historian and successful published author including bestsellers the Plantagenets and more recently The Hollow Crown has now hit the small screen (TV.) The series kicked-off with an engaging romp around Dover Castle. Catchup with it if you can well worth a view and recording. Dover castle has a great heritage but is also known as Battle Castle Dover. The video below by the Castle team gives you an idea with some brilliant flyovers why it is still such an impressive castle to this day.

Built by King Henry II grandson of William the Conqueror, with a chapel he built dedicated to his late friend, Archbishop and subsequent saint Thomas Becket. There is a tremendous story to tell and links to the machinations of King John, Magna Carta and the invasion at the invitation of the Rebellious Barons of the King of France literally undermining the rock based foundations of Dover Castle. He may may have been invited by how many of us know that William the Conqueror was not the last French noble to invade Britain? 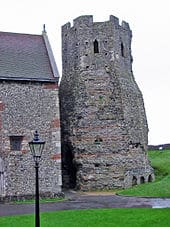 That is far from the end of its significance as a British Castle, with its position poised at the nearest point to France and hence the most vulnerable point to invasion. As the series says a fact not missed by successive aggressors including Napoleon and Hitler.

Looks like the series has got to be worth a  digital bookmark and maybe a visit if you can squeeze one into Dover Castle.
Take a look at these flyovers, what a fantastic site to still be in tact. We forget how lucky we are in this country to still have these to enjoy and learn about