Mar 27, 2015 / Comments Off on Richard III son of York buried in Leicester
This entry is part 5 of 5 in the series House of York
House of York

Richard III Son of York is buried in Leicester 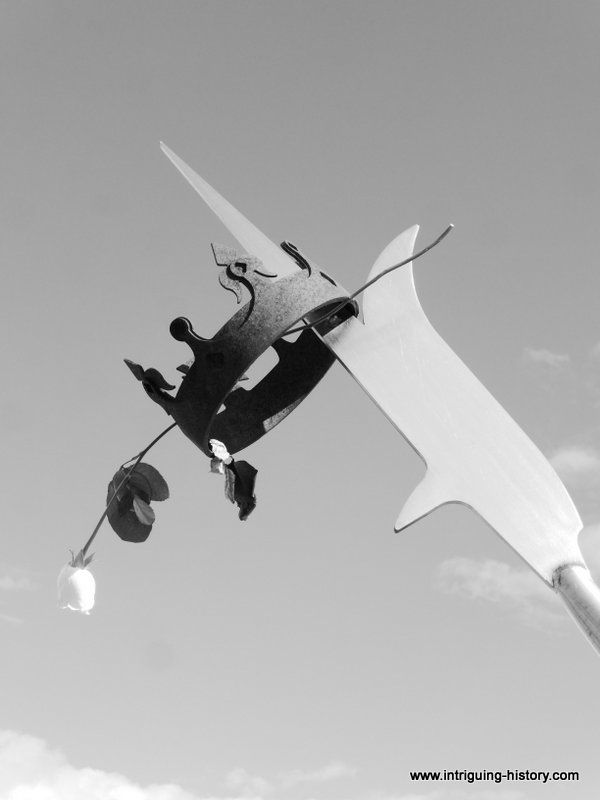 Visiting the Battlefield at Bosworth, an encounter with a son of York

Richard III Son of York, buried in Leicester but the people have made this anointed king, very welcome in the heart of their ancient and multi-cultural city. The world of Medieval Britain has come alive for the first time for many people in Britain. Controversy will no doubt continue but this long lost King’s remains are now at rest.

Visiting Bosworth this week Helen told me about the white roses, representing York, placed carefully on the pavements, which King Richard’s coffin has passed by during these last few days and said how touching and puzzling this was at the same time. What was this really about? A king long dead, controversial to say the least and a contemporary audience emotive and passionate about being involved in a time when getting people to vote is much more of a challenge.

When visiting the Battle field monument at Bosworth this week she was moved by the level of genuine care and participation in this unique set of events this week and and at the same time puzzled. Gratefully she had her thoughts set straight by a local man commenting on the phenomenon that she was lucky enough to be witnessing:

“He’s one of ours, you don’t turn your back on a son when he does wrong.
You take him back into your home and look after him”.

Put straight by a man from the North, without the pomp of a full state occasion.  The politicians kept a their distance, the best of a local community sharing their event with the nation and the world.

It seems, whether Leicester or York, the general opinion is that Richard’s remains have come home. Yesterday I heard Dr Buckley say that this has been about the humanity and humanising of the boxes of bones, giving dignity and respect after the exhumation and returning Richard III to the heart of the Church. Certainly history suggests that whatever the deeds of medieval kings were, they were generally motivated and mindful by what, to a greater or lesser degree, they saw as their direct relationship to God and that their kingship was as a direct result of that relationship. Right or wrong,good or bad king, Richard would have sought and expected a christian burial and no a hasty paltry burial no much better than that of a poor man.

We think, therein lies the answer to this outpouring of support.

Richard III a son of York, buried in Leicester, a Catholic king in a Protestant Cathedral. He was the last English king to die in Battle, not the first to be buried twice but certainly the first who’s last resting place would be decided in a 21st century High Court. 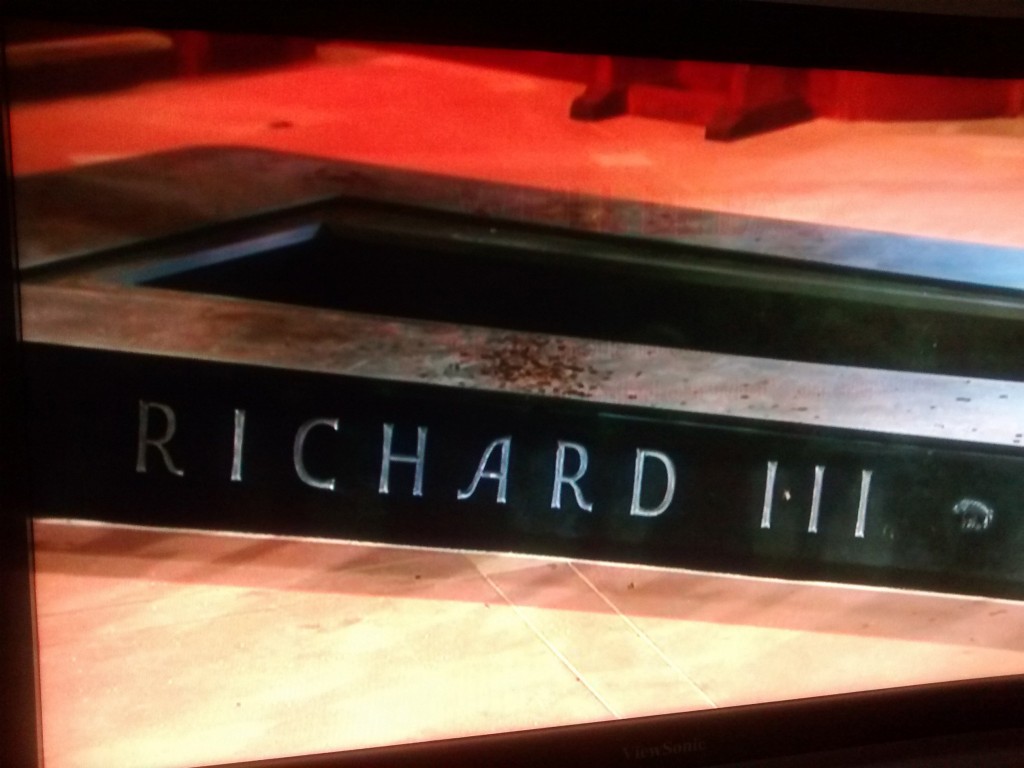 Richard III’s contemporary new tomb, fit for a king with the fossil based stone cover, being installed overnight in Leicester Cathedral. A simple design with a deep christian cross carved into the beautiful Yorkshire stone.

Is this a fitting end to a 500 year old complex series of essentially family feuds? – The War of the Roses

Alternatively it maybe the beginning of the next stage in the Ricardian quest to resurrect a reputation, long ago surrendered in the myth and magic of our most famous bard, one William Shakespeare. You have to hand it to the modern day sleuths and in particular the stoical Philippa Langley and the Richard III Society, they achieved what even the lead archaeologist believed was a million to one chance of finding Richard in Greyfriars car park. Will they silence the bard and go on to resolve the dilemma as to who killed the ‘Princes in the Tower?. How much was Shakespeare simply telling the history recounted by Sir Thomas More not as propaganda but at least he true belief of what had transpired.

“Now is the winter of our discontent
Made glorious summer by this sun of York;
And all the clouds that lour’d upon our house
In the deep bosom of the ocean buried.

William Shakespeare Act I Scene I” will the Ricardian’s or the Bard have the Last Word?

Greatly cheered and motivated by the British role of the passionate amateurs, keeping their faith over decades not just the last 3 years. 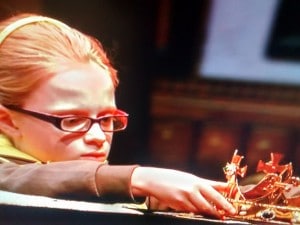 What a wonderful outcome for the amateurs, ably assisted of course by the experts, Prince Richard himself, the Queen’s first cousin and current Duke of Gloucester as patron of the society. The archaeologists led by Dr Richard Buckley and all the historians and scientists who helped to make it happen. What a phenomenal feat and it may only just be starting. The ability to not only know Richard’s eye and hair colour but to determine that there was a break in his genetic line and how intriguing could that be going forward? “DNA with some startling results and a break in the Plantagenet line ”

This was a strike for all those who revel and toil outside, as well as inside the ivory towers of academia and who ever cared about their own local, family, social or special interest history project.

It is that same passion and near obsession for their subject as the Ricardians have, that drove this project onwards when others may have given-up, run out of project time or tenure at their respective institutions .  This was a moment when the amateurs and sponsors of the Richard III society should really take huge pride, it might never have happened without them. We might not agree on their revisionism but we can certainly admire and appreciate their endeavours and fortunately share in the outcome culminating in the events of this great week.

What a moment, when a Brownie entered the history books. This young lady had won the honour doing her Richard III Badge. She placed the replica crown on Richard’s Pall, you could not help but be struck by such a moment. There were many such moments this week. Full marks to Leicester the city that held back the temptation to keep the people and the crowd distant and welcomed all. With the historic first and now a second female Bishop just appointed, this is quite a year for the Church of England. The Cathedral managed to keep the mood personal and intimate without it becoming just a media spectacle. It mus have been a very difficult balance to strike.

An extraordinary week and certainly a poignant day, whatever your views and perspective on the nature of the man and his deeds, the monarchy and this monumental moment, marked quite movingly in Leicester today. Finally Richard’s fate was sealed in the Cathedral, perhaps one of the few certainties in the events that made-up his short life but long story.

It feels like this was not a day for judgement but simply to observe and try to absorb this extraordinary event that is certainly a once in your lifetime moment. The juxtaposition of modern and medieval looked and felt more like a chapter from H G wells ‘The Time Machine’  It will surely take some time and let’s hope this kickstarts even more involvement of the community on the Heritage and Lottery funded projects that it may inspire in the following years.

The poem by the current Poet Laureate will stay with many of us as a memory to relish. It was enhanced by a modest and understated reading by an actor with another connection to Richard, Benedict Cumberbatch, the son of actors and an old Etonian, who just happens to have a genetic connection as a 2nd cousin, 17 times removed. 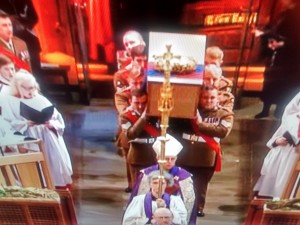 It may seem like the ‘world and his wife, is connected to Richard and the Plantagenet Roll of the Royal Bloodline and no doubt we would all like to know (and if you do click here.)

Benedict is himself playing Richard III this year for the BBC Hollow Crown series, which has been partly filmed at Wolvesey Castle in historic Winchester.

Carol Ann Duffy performing a role that perhaps no other Poet Laureate will ever be able to match, dedicated to a King dead 500 years and a unique moment in her nations life with her stanza’s up against the savage portrait of the master the Bard. She did us all proud.

” My bones, scripted in light, upon cold soil, a human braille.
My skull, scarred by a crown, emptied of history.
Describe my soul as incense, votive, vanishing; your own the same.
Grant me the carving of my name.
These relics, bless.
Imagine you re-tie a broken string and on it thread a cross, the symbol severed from me when I died…

Poem quotation by Carol Ann Duffy  perfect for the moment and stands-up well against the genius of England’s greatest Bard, the often quoted author, who has at least skewed our national view of this controversial king, or we thought he had. It must have been an immense challenge and pressure but what a result.

For the full text you can download digitally the Order of Service as a PDF file, with the Queen’s note and details of all of the music, its a nice touch in a networked world. Here is the digital record of the event from Leicester Cathedral’s website

What a week, you get the feeling whilst the ceremony is now over we will not forget readily in our lifetime these events.  It also feels as i did with wonderful Poppy Tribute for WW1 at the Tower of London and the D-DAY commemorations from just last summer, that this nation is not done yet with its history.  It  is very much part and parcel of our modern culture as well as our past. The good news is, it  not over and this week it feels like it is only just beginning. The day of the amateur, enthusiast the family, local social, county or special interest amateur has risen again. There is no point in academia if the wider society does not share and take ownership, what a fantastic example of  the far too often used phrase ‘public engagement’ has been,

The good news is there is already more to share can we keep the process of sharing the knowledge and expanding it across Britain and the world continue. If youa re interested take a look at these three picks of the day for future debate. it maybe Richard and our story is only just beginning. What a week, thanks for taking a look or a browse.

More to share, explore and debate about this controversial King

The Bloody Tower filmed as court trial replicating the evidence for and against the deeds of Richard III, this was on the 500th anniversary.  Today with recent events of the last three years this film is a document itself in his long tale. 1984, seems so long ago but there is a fascinating account in the YouTube Archives and it is obvious that those central to these last few days have toiled for decades to bring us to this historic week. Did Richard III murder the Princes in the tower?

In 1984 The Bloody Tower was filmed and here you can see the video showing it introduced by the Duke of Gloucester, Professor Starkey holds his own court amongst a remarkable lineup of QCs, lawyers and expert witness accounts analysing what we really know and whether we can from a historical perspective ever resolve the dilemma of the Princes in the Tower.

Understand Shakespeare’s perspective and enjoy a moment in the history of theatre, on YouTube the Laurence Olivier version of Richard III, who at least starts out as the most machiavellian of kings.