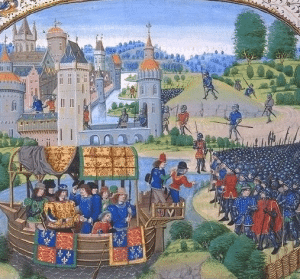 A ten year old boy prostrate himself before the altar in Westminster Abbey, the year was 1377 and Richard of Bordeaux was duly crowned Richard II of England.

It was an unfortunate time for such a young man to assume the crown. The previous three decades had seen the country had been wracked by the plague, laying waste to almost a quarter of the population. The impact this was to have was complex.

The continuing military skirmishes with France required money to be raised and taxation was raised to an unprecedented level.

It was not just a revolt by the peasants about the unfair taxes levied, it was a revolt by the common people against the powerful and wealthy ladnowners and the corruption and greed exhibited by those in power. Solid members of society, jurors, constables of the parish stood alongside the labourer.

It was a peoples revolt.

On 30th May 1381, the men of Essex, at Brentwood, refused to pay the royal official and sent him packing. The rebellion quickly took hold and men of Kent, Hertfordshire, Norfolk and Suffolk also refused to pay. The troubles began to spill into the counties of Surrey, Hampshire and Wiltshire.

The rebels marched on Canterbury, home of the Archbishop, they released a cleric John Ball who joined them and their slogan became;

‘John Ball greets you all and gives you to understand, that he has rung your bell’

It is estimated that at this point there were in excess of 30,000 men on the march.

They poured into the city, whose gates were open to them, the population of the City of London had sympathy for their actions releasing prisoners from the Marshlsea and Fleet prison. They tore through the lawyers quarters of Temple, setting fire to properties. including the home of John Gaunt, the Savoy Palace.

On 15th June, 20,000 rebels gathered at Smithfield where the king had agreed to meet them to discuss terms. At the head of the body of men was Wat Tyler. 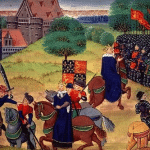 King Richard now turned the tables on his rebelling subjects. He revoked all promisesmade at Mile End and was totally disdainful of them, in fact it was recorded that he told a group of protesting villagers;

“Rustics you are, rustics you will always be. You will remain in bondage, not, as before, but incomparably harsher. For as long as we live we will strive to suppress you and your misery will be an example to posterity”

Wat Tyler was beheaded at Smithfield Market and John Ball was hung, drawn and quartered.

Not all was lost though, by those who had dared to rebel. There was a constant fear of rebellion and insurrection that, over the coming decade resulted in steadily improving conditions for the labouring classes, a rise in wages and living standards and no return of the poll tax.

The feudal order was beginning to break down.