In Medieval times leprosy was a disease to be feared and sufferers removed to a place of isolation.

But why was leprosy or Hansen’s disease at it is called nowadays, treated differently to other contagious diseases of the time? Leprosy in Medieval times was considered to be a ‘special’ disease referenced over and over again in the Bible although the leprosy described in the bible was not the disease we now refer to as leprosy, the biblical references include a great number of skin diseases. It is most frequently referred to in Leviticus where it referred to uncleanliness or imperfections and this symbolism extended to rot or blemishes on all sorts of materials including clothing, leather goods and even the walls of houses. 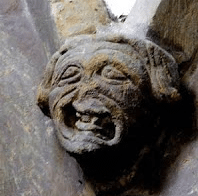 Other Old Testament references to leprosy are associated with punishment or the consequences of sin. Leviticus did not seem to judge the leper morally but considered him to be ritually impure. The skin condition an outward manifestation of some sort of internal evil. The laws set out in Leviticus 13 say that anyone with some such sores will be examined by a priest who will then decide whether or not they are ‘unclean’. Leviticus 14 sets out the rituals to be performed that will make him clean. There is a paragraph that was probably the most damning part of the laws for dealing with lepers and it was this;

And the leper in whom the plague is, his clothes shall be rent and the hair of his head go loose and he shall cover his upper lip and shall cry “unclean, unclean”. All the days the plague is in him he shall be unclean, he is unclean, he shall dwell alone, without the camp shall his dwelling be.

References to leprosy have a different emphasis in the New Testament, they talk about the healing of those suffering from the disease. Jesus freely touched people with leprosy. While people with leprosy traditionally suffered banishment from family and neighbors, Jesus broke from the tradition. He treated lepers with compassion, touching and healing them. So on the one hand lepers were to be feared and cursed, on the other they were held as being special and receiving the Grace of God. When the disease turned up in the British Isles how would the population react? 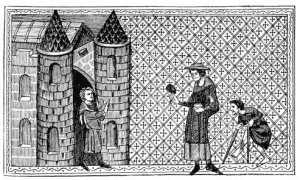 It is thought that leprosy was seen on the British Isles some time in the 4th century.

Feared and misunderstood by a population for whom disease cut short their already limited life span, it is understandable that communities did not know how to deal with those afflicted. They took their guide from stories in the Bible. In particular the parable in Luke 16: 19-31 where the rich man had at his gate a beggar called Lazarus who was covered in sores (leprosy) who longed to eat what fell from the rich man’s table. The dogs came and licked his sores. When Lazarus died he was carried by angels to Abraham’s side. The rich man also died and he lay in Hades tormented. He saw Lazarus with Abraham and begged for Lazarus to be allowed to come and dip his finger in water and cool his tongue. Abraham replied, son remember in life you had all the good things whereas Lazarus did not, he had all the bad things. There is a chasm between us and neither can go either way. The rich man then begged Abraham to allow Lazarus to return to Earth to tell his brothers so they might learn from him. Again this was refused. This parable may have been seen as a message that lepers were suffering as Christ on Earth did, they lived ‘purgatory on Earth’ and that when they died they went straight to Heaven. Those that cared for the lepers might therefore themselves have their journey to heaven accelerated. 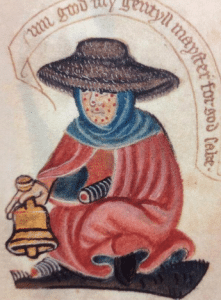 The first independent hospitals in England were built under the orders of Archbishop Lanfranc in the 11th century. Alongside these early hospitals separate leper hospitals (leprosarium) were created. These hospitals would have been built at a distance from the town, often on the main road in or where there was passing traffic. In order to maintain themselves, the lepers needed to beg for alms  and trade, a part of this trade was to offer to say prayers for individuals. In this we see the two aspects to Medieval leprosy, they were cast out but treated with respect as they were living their purgatory on Earth.

The excavation of the leper hospital of St Magdalen, just outside Winchester was able to show the careful burials of the sufferers, treated with dignity. The grave cuts included a head niche, a sign that even after death the lepers were treated with respect. The isolation of lepers from the rest of the community might suggest that some understanding of how the disease was spread was in operation. As communities grew and towns became more densely populated, the disease would have become more prevalent. Certainly the Church took steps to isolate lepers. In 1175 the English Church Council ordered that lepers must not live among the healthy. There then followed an edict from Rome in 1179 saying that leper communities should have their own priests, churches and cemeteries. The segregation of lepers happened when the individual showed outward signs of the disease became a rite of passage, known as Leper Mass. Once identified the sufferer was escorted to the hospital, often called the leprosaria. The mass (varied but the purpose remained) was said as the sufferer was initiated into the hospital.

The lepers were also refused the right to be buried with the ordinary people. For the pleasure of being in the leper hospital, money had to be paid and you had to bring all the goods you would need for life within its walls. Interestingly, the leper was not forced to stay in isolation , they could go out and beg for alms, meet family etc but they had to abide by the rules set out. If they did not they could also be kicked out. This in itself is interesting because if the hospitals were considered as being places just to quarantine those with the disease, they would not be pushing them back out into the society they had just been removed from. 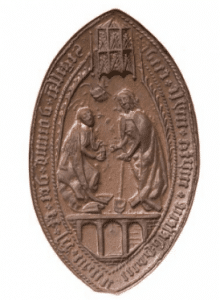 Other hospitals that have been extensively researched are those of St. James and St. Mary Magdalene’s in Chichester. St James had a set of rules  These two hospitals are located almost a kilometer outside of the town, and were meant for those who had been expelled from the city for leprous diseases. In its documented rules, St. James was said to have been built in order;

‘to pray for the king, the realm and all benefactors and to recite the Creed, a hundred Lord’s prayers and Salutations’.

Possibly each hospital had its own rule book, those with the disease had committed some sin that only penance and prayer could remedy. But is our understanding completely clear about how lepers were treated in Medieval times? There seems a possible dichotomy in their status in Medieval society. By placing sufferers in isolation but providing them with care and prayer, there was an element of compassion but in seeing them as sinners who needed to do penance they were seen as somehow at fault. Who paid for these hospitals and saw to the burial of the bodies? The number of lepers in the British Isles must have grown at a great rate during the 11th and 13th centuries as 200 – 300 leper houses were built.

The infirmary had a chapel attached to it or the hospital may have been built on the outskirts of a town as a simple isolation block. Some discussion has taken place about so called ‘leper windows or squints’ in churches. It is suggested that these small openings with a view into the chancel, allowed lepers to hear a service without entering the church but there is no conclusive evidence to support this theory. Leper Hospitals or Lazar Houses as they were sometimes called were established in the 11th – 13th centuries.  The point of their segregation was not so much as one of isolation to prevent contagion but a desire to avoid ritual pollution. Admission to the leprosy hospitals was at first voluntary, more a place for those sufferers of the disease to take part in a religious life. Alms were given to them and many went on pilgrimage hoping to seek a cure. They were not part of a shunned community and this was due to the attitude towards leprosy in the New Testament. 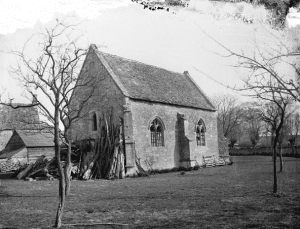 By the 15th century however things started to take a turn for the worse for the victims of leprosy. Ideas and theories about infection had started to emerge that had much to do with the frequent outbreaks of plague across Europe. The separation of the leper to maintain ritual purity was of less importance than the separation to prevent contagion even if little was known about the spread of infectious diseases the idea of noxious vapours being emitted by the person was afoot.  Lepers were now deemed to be people who were suffering from the disease we now recognize as Leprosy. The point of their segregation was not so much as one of isolation to prevent contagion but a desire to avoid ritual pollution. Admission to the leprosy hospitals was at first voluntary more a place for those sufferers of the disease to take part in a religious life. Alms were given to them and many went on pilgrimage hoping to seek a cure. So the place of the leper in society shifted and attitudes changed. Maybe the coming of the plague had much to do with the changing attitude and the role of the leper in society was put aside in the face of the ravages of the black death.