King Henry V, a hero of Agincourt or a cruel and aloof ruler?

King Henry V remains one of England’s most enigmatic rulers. He has been described in the 20th century as ‘the greatest man to ever have ruled England’. He has been described as the most accomplished military strategist ever to rule. His gifts to the church, founding monasteries and pious behaviour paint a picture of a man who put God first. He considered himself a divine ruler, a ruler whose every action was directed by God. He became the king of legends, a man whom Shakespeare immortalized in his plays Henry IV and Henry V, a man who was charming and gallant and gracious in his victories and yet if we look at the evidence of some of his actions it is hard not to place a different interpretation on his character. And what of his private life? Observations were made that he had little time for close relationships. His wife,  Catherine de Valois  became one of England’s most intriguing Medieval women but what does this tell us about Henry the military ruler?

We remember King Henry V as the triumphant king at the Battle of Agincourt, what is less well remembered is that after his victory he ordered the killing of two hundred French prisoners. Was it simply an act carried out in response to some now unknown event on the battlefield? Possibly but it wasn’t King Henry’s only coldly calculated slaughter following a victory. Time after time he took lives in an unnecessary frenzy of killing. 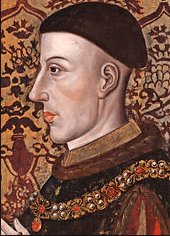 On the morning of the 4th September 1417, King Henry V prepared for a bloody assault on the town of Caen in France. He heard three masses and then ordered his troops to advance on the besieged city. Surely there is nothing unusual in this, little to question in the actions of this most military king? What followed the English defeat of the people of Caen was however more shocking because it was recorded that King Henry V had every male over the age of twelve put to death, a total of 1800 men and boys slaughtered. When questioned about this action King Henry is reported to have answered;

Henry was a devout and pious man who was completely convinced that he was King of England as was his father before him because God had chosen them. They were kings because God had willed it so. Not everyone in England agreed with him and so it seems he set himself on a course to bring the French under his heel. This would be his crusade, with God’s will behind him, he would show his military might by defeating the French at every turn and in this way, was going to prove his absolute God given right to rule both in England and in France. 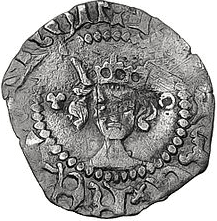 It was fundamentally important to the reign of Henry V that he took back control of the rights settled by the French on his grandfather King Edward III and he wanted to do it by military means. Henry did not want a negotiated settlement with the French he wanted to defeat them militarily. As Prince Henry, he had been forced to witness the great hostility by the French towards his father, they renewed their claims to the Duchy of Aquitaine, raided Calais and perhaps most pointedly as far as the young Henry was concerned, sent help to Glendower in Wales.

Prince Henry the making of a king.

In 1399 at the coronation of his father King Henry IV, the twelve year old Henry was made Prince of Wales. When, in 1400, Owen Glendower began a Welsh uprising, he put in chain events that would absorb the young prince’s energy for the next five years. In between dealing with Glendower he also had to fight the rebel Henry Percy Hotspur, he commanded an army that resulted in a royal victory for the young prince. His fight with the Welsh however taught him the skills that he would rely upon when fighting the French. He learnt how to send out small teams to agitate and aggravate the enemy, how to lay siege to an enemy and most crucially, how to raise finance to feed the mechanics of war.

Prince Henry wanted to be king and applied pressure to his father to abdicate on grounds of ill health. He moved Archbishop Arundel aside and took over the Council, the advisers to the King. His father rebuked him smartly and brought Arundel back but not before Prince Henry had impressed those around him. Henry was laying out his stall for all to see.

The division of support amongst important people could be seen as the old supporters of King Henry IV versus supporters of the prince who would be king. In particular they were split over the French. The French King Charles VI suffered from frequent bouts of insanity, during these periods the struggle to rule fell between his brother the Duke of Orleans and his cousin the Duke of Burgundy. Watching the French weaken, the English saw an opportunity to attack the French but which side should they favour. The prince, with the important backing of a number of young Earls, including Warwick and Arundel, were anxious for military adventure and more importantly he had the backing of the John of Gaunt’s sons, Henry and Thomas Beaufort. Prince Henry, favoured the Burgundians, his father the Orleans.

At this point Prince Henry was still head of the Council and under his command the Earl of Arundel left England to give support to the Duke of Burgundy. The Prince was then dismissed as head of the Council and an about tail happened with his brother Thomas being sent to France to give support to the Duke of Orleans. Prince Henry stood his ground and refused to go but in doing so laid himself open to accusations of conspiracy against his father. Henry was walking an incredibly thin tightrope.

Maybe Prince Henry was saved by the rapid decline in his father’s health which followed a year later, who knows? Still his clever positioning had gone some way to proving to some of those around him that he was capable of becoming King of England, not all were convinced though.

King Henry V seemed to want to offer those who suspected him of forcing his way to the crown, some sort of peace offering, estates were restored, favours handed out. Why would the new King have done this? Was it to draw his enemies in closer or was it to gain support for his big dream, his ultimate goal, the defeat and conquest of France.

For some reason King Henry V wanted the French to return the old old Angevin empire to England. The Angevin empire was lost under the rule of King John and the loss of it for some reason lay like a thorn in the heel of Henry. It was of course of impossible ask of the French, the hugely wealthy lands of the Angevin were never up for negotiation and by making this the central point of negotiations King Henry V had really granted himself the right to go to war with France. He never intended it to be a negotiated settlement.

So Henry went to war and many willingly followed him.

King Henry was not without his critics but he was born to lead and he believed that he had only one to whom he was answerable, God. His piety inspired others to believe in him and whatever they privately thought they followed him regardless. Now this makes it sound like he was a truly charismatic and inspired leader and this was possibly true, what else was true however was his ability to coolly have men executed who showed any sort of dissent. He was ruthless, dealing with conspirators, friends and allies if he judged them to be questioning his decisions. It is no wonder then that King Henry V had plots against him that included some of his erstwhile friends. He handed out fines to those who took matters regarding their own life choices into their own hands, such as who they may or may not marry without his permission. He removed lands and goods with impunity leaving former allies destitute. He was the complete autocrat, a religious zealot and he took these characteristics to war with him believing that God’s seal on his kingship would be seen through his ability to make war. 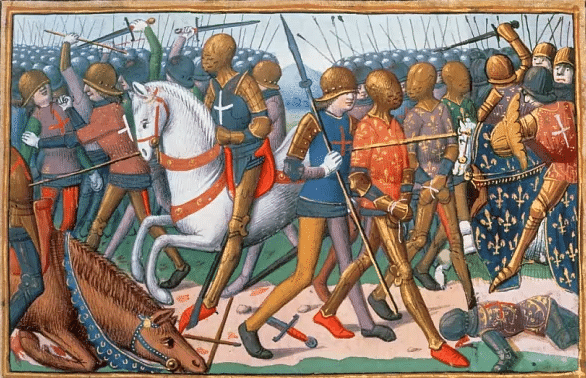 Agincourt was fought in a day, many members of the French royal family were killed and France was left shocked and reeling but King Henry’s shock tactics were followed through after the battle with scant regard for humanity, not for Henry the role of magnanimous victor. His conquest of Normandy was a ruthless programme of lengthy sieges using terror tactics to starve or terrify the towns into submission through a process of indiscriminate and brutal killing. The King and his men behaved like land based pirates after the spoils of their crude but effective tactics.

Nor did King Henry have much regard for his own men. He did not have his dead soldiers buried on the battlefield with any Christian ritual, the dead were piled up and burnt. He was also slow in paying his men, some remained unpaid for years after the battle. So where is this brave King who we should regard as one of England’s greatest kings? From today’s position his actions seem cruel but in the 15th century his rule was absolute because they believed he had been favoured by God and therefore whatever he did came from God. He was by one account a ‘Prince of Justice’, he favoured no one punishing all sinners with an equal hand. He behaved in a single minded way that cleaved through all he put his mind to. Was he a zealot? The answer is probably yes. He spent little time in his home country and the Commons had begun to complain about his ceaseless drive to defeat France. His death in 1422 meant England lost a brilliant military strategist and like so many who die young, he left behind a sense of awe, a ‘Golden King’ epitaph which Shakespeare did much to burnish.

What role did Catherine de Valois play in his life?

Henry married Catherine de Valois in 1420 but saw little of her, Henry was a chaste man and had few if any love affairs, his mind centred on God and the role he believed himself to be destined. She gave birth to his son and had him christened in his absence, did Henry even see the boy who would become King of both England and France? Catherine was herself a rather splendid woman whose life was intriguing and convoluted and so bound in England’s history as to be an altogether more interesting character than her pious husband King Henry V.