Why the French lost the Battle of Agincourt

Jan 7, 2015 / Comments Off on Why the French lost the Battle of Agincourt

Why did the French lose the Battle of Agincourt when they outnumbered the English 4 to 1 and had all the advantages of fighting on land they knew well?

The task that King Henry V had set himself and his troops seemed an almost impossible one.

Indeed the men themselves were resigned to losing the battle. Exhausted by disease and the fact that they had been marching for weeks on end, they kissed the ground before they fought, believing they would be dead before the end of the day.

But it was the French who lost and the English  who won. So what happened that day on the 25th October 1415, to turn the tide of events? As in most things there are multiple reasons why the French lost the battle but first a little of the background.

He landed at Harfleur and fought hard for six weeks, losing nearly a quarter of his men  before the town finally surrendered. This gave the French time to muster a large army of men, nearly 30,000 troops compared to King Henry’s 7,000.

Henry tried to run his exhausted English troops back to Calais and avoid entering into combat but he found their way blocked as the three divisions of the French army surrounded them.

Henry made the best of the situation, arranging his troops so that the French were forced to move towards them down a pinched front line, squeezed by the woods of Agincourt Castle. They drove stakes into the ground and waited for the onslaught but impatient with waiting, Henry took command and ordered battle to commence, taking the enemy by surprise.

What then compounded the French problem?

The French quite possibly were out trained, out disciplined and out resourced in terms of weapons

The Wayside Cross at Agincourt where 5,300 french troops lie buried

The French were over confident, they never considered they might lose and had brought a gaily painted cart to the battlefield on which they expected to trundle the captured king.

The thing they thought their biggest advantage, man power, had in fact been their biggest problem. Too many ill disciplined men, showing complacency and a lack of respect for their leaders.

We few, we happy few, we band of brothers

For he today that sheds his blood with me

Shall be my brother, be he ne’er so vile

This day shall gentle his condition

And gentlemen in England now-a-bed

Shall think themselves accurs’d they were not here

And hold their manhood cheap while any speaks

That fought with us upon St. Crispin’s Day 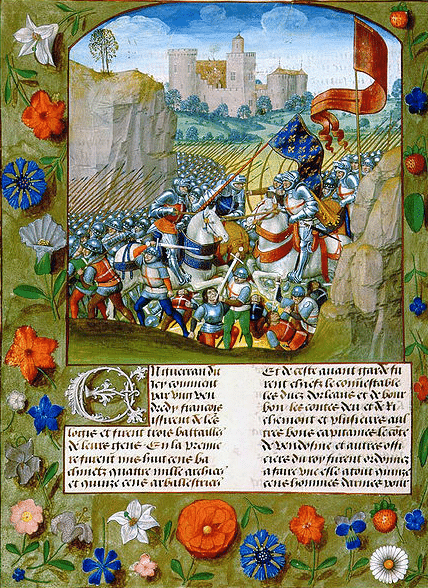