British Union of Fascists and the East End battles that ensued, a history worth revisiting.

As we enter a new era of right wing politics in both Europe and America, it is worth visiting the period in British history that preceded World War 2 during which the rise of Oswald Mosley’s British Union of Fascists was put squarely on the agenda.

The British Union of Fascists was modelled on the Italian Fascist movement, it was intended to be a political body would be acceptable in the mainstream. It was a delusional idea. The British people did not like what it saw and heard of Oswald Mosley’s black shirted right wing thugs and refused to let them march on their streets under a cloak of borrowed political respectability. There was a rejection of both their economic programme and their political message which Mosley resolved to turn around. 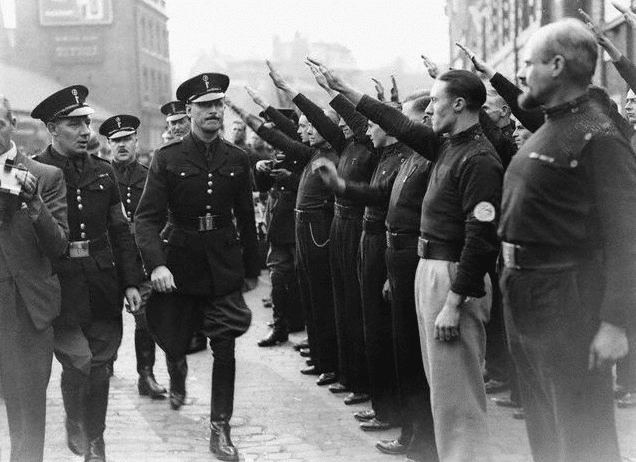 The British Union of Fascists

Antisemitism was not part of the original plan of the British Union of Fascists but in a desperate attempt to bolster support, Oswald Mosley decided to incorporate it into his refreshed agenda. As in our present day  right wing rhetoric, it was thought that by targeting a group of people who could be blamed for all the wrongs in society, competition for housing and jobs, they would find support. They targeted the East End of London and stirred up support in groups of people who had felt the icy blast of recession and wanted someone to blame. The jews were an easy target. The Jewish people so long used to turning the other cheek, decided to retaliate and with the support of the trade unions and the Communist Party were ready to oppose Mosley’s marches through the East End of London. Not everyone felt easy about the idea of physically opposing the blackshirts but enough stood together to show that they would not be silent and cowed in the face of antisimetic racism.

The Battle of Cable Street.

The events that unfolded during and after the ‘Battle of Cable Street’ were meant to expose the British Union of Fascists as extreme bullies, the Jews by standing up to the fascists hoped to pull together the opposition. In fact it had the opposite effect. The BUF used the violent response of the Jews as a weapon against them. It pointed out to the community of the East End that the Jews had claimed the territory as their own, that the police had colluded with them and that the communists were also trying to suppress the voice of the ‘real’ East End community.

The BUF urged the people to ‘reclaim your country’

The strengthening of the fascist voice.

Far from being broken by the anti fascists the British Union of Fascists grew stronger. The Cable Street incident had brought their cause out into the open and where their extreme views had been held silent, they now had the glare of publicity and many were swayed to support their hate message. Their anti semitic rants found support amongst many who, until then had remained hidden and silent. A huge number of people signed up to join the BUF in the wake of Cable Street. All these people had needed was a movement who were given voice through the media. It suddenly became ‘acceptable’ to belong to such a group whose prime reason for existence was to extol hatred and intolerance towards Jews and other minority groups. Local elections saw a swelling of their ranks and what was considered as a problem that had been dealt with, was in fact growing in strength.

London Jews who had been subject to increasing levels of violence and intimidation and their supporters, the dock workers, the railway workers, Irish workers and many different factions of the Labour Party, had stood bravely in the path of Oswald Moseley and his thugs but in bringing the opposition onto the streets they fueled the fire of antisemetism, they gave it oxygen using their voice.

The British Union of Fascists (the BUF) escalated attacks both physical and verbal on the Jews. By their rhetoric they encouraged gangs to attack Jewish premises and harass Jews, name calling and daubing graffiti and encouraging others to join in spewing hatred.

As the campaign escalated, Mosley chanced his arm and went flat out on a ticket of antisemitism. Even though his party didn’t win a single seat in the local elections they took a surprisingly large number of votes and this despite the fact that a large number of the BUF’s young supporters were not able to vote. It should have been a very big signal to the mood of a significant number of disenfranchised people whose voice had largely gone unheard during the recession of the 1930’s but the establishment seemed to conclude that the Battle of Cable Street had drawn a line under operation of the BUF. The marches and the subsequent disturbances did however call into question political extremism and whether it was going to be tolerated by the British public in general.  A Public Order Act was issued in December 1936. This Act prohibited the wearing of uniforms in connection with political objects and made further provision for the preservation of public order on the occasion of public processions and meetings and in public places. It also went some way to stem the language of the fascists but it did not seem to have the necessary teeth to prevent the meetings and the marches although it did spread them more widely across London. 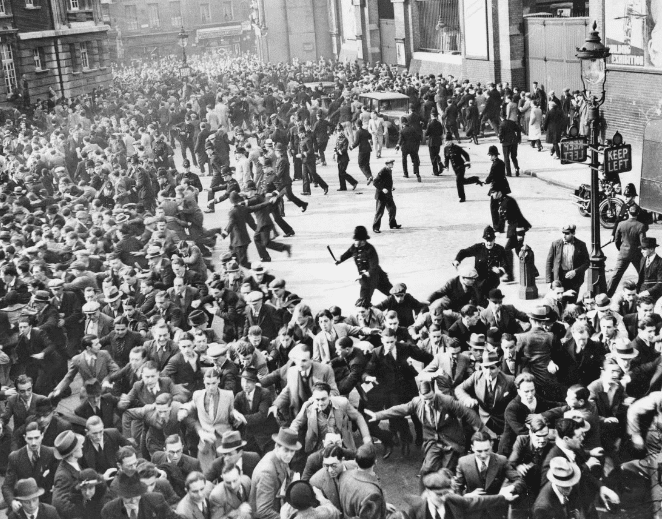 The Battle of Cable Street

A year later the battle of Bermondsey took place.

Whatever the truth about Cable Street, one fact cannot be ignored, politicians may have wanted to put out the fire of the BUF, the people had other ideas and continued to oppose the efforts of Mosley and his cohorts wherever they raised their heads. If lessons weren’t learnt on Cable Street they were in Bermondsey.

On October 3rd 1937, the fascists set off from Millbank in a march to celebrate the fifth anniversary of the BUF. Surrounded by hundreds of policemen the marchers approached the barricades set up by the Jewish community, the Communists and many other groups whose anti fascist views poured out onto the streets. The police charged the barricades and they and Mosley’s men were treated to a barrage of missiles. More people were arrested and given custodial sentences than at Cable Street the year before.

It was a turning point for those involved.

The level of media attention was unprecedented. Newspapers around the world carried the story and suddenly all were carrying the fascist message on their front pages. This was not the intention of the Jewish anti fascist organisations nor of the Communist activists and they changed tack, preferring to focus on striking at the heart of the fascist movement using intelligence and ideology rather than physical violence. World War Two was just around the corner and the result of such extreme politics needs no discussion here but remembering how such political views become so easily tolerated and then accepted, should serve as a reminder as we face similar rhetoric from certain politicians today who nudge increasingly closer to power. 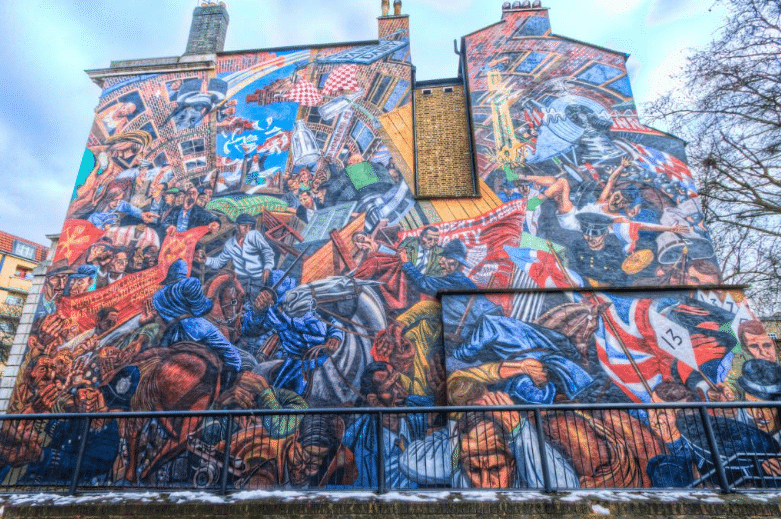 This mural painted by Dave Binnington Savage, Paul Butler, Ray Walker and Desmond Rochfort between 1979 and 1983 to commemorate the Battle of Cable Street in 1936.