There are so many Matilda’s littering Plantagenet history that you can be forgiven for getting them muddled. One of the lesser known Matilda’s was the eldest daughter of King Henry II and Eleanor of Aquitaine. She was born in the summer of 1156 at Windsor, just 15 months after her brother, Henry the Young King. It was the summer her older brother William died aged just 3 years old. She was taken to London to be christened by Archbishop Theobald of Canterbury at the church of the Holy Trinity at Aldgate.  She was named after King Henry II’s mother, the Empress Matilda.

Matilda and her brother Henry were very close in age and shared their young years in the household of their mother. They were taken to and fro between England and France and remained close in the court of Eleanor. Their father was very engaged with the politics abroad at this time and so they probably had little contact with him in their young years.

Indeed John Salisbury, one of the most accomplished of Medieval scholars and who worked as secretary and counselor to Thomas a Becket, wrote to the King reminding him of his duty to both country and to his children;

As the King’s eldest daughter, Matilda was a precious commodity, politically. Negotiations for the marriage of Matilda to Henry the Lion, Duke of Bavaria began in 1165. Matilda was just nine years old. The Archbishop of Cologne, close advisor to the Emperor Frederick Barbarossa, led a delegation to King Henry when he was at Rouen. The Emperor was lining up Henry’s daughters, one to marry his young son, another, Mathilda, to marry the Emperor’s closest ally, Henry the Lion.

Such an alliance would give the two men much needed mutual support in dealing with the Pope. The Emperor was in conflict with him over the northern cities of Italy and Henry needed the assistance of the Pope in dealing with Thomas a Becket who was in exile by the end of 1164.

Barbarossa had also put in place an anti-pope, set against the ever hostile Alexander III. Henry would not support him in this though and as a result only one marriage took place, that between Matilda and Henry the Lion. 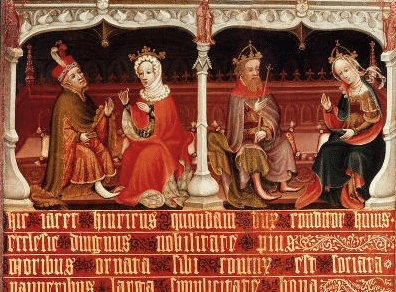 15th century depiction of Matilda and Henry (on the left)

The negotiations continued, Matilda was with her mother in Anjou and Maine during the summer and winter of 1165. In the spring of 1166 King Henry joined them and at some point Matilda returned to England with her mother and prepared for her marriage. In the Autumn of 1167, it was time for Matilda to leave for Germany, she was eleven years old. Germany was not an unknown place to Matilda, her grandmother had left to marry in Germany fifty years before Matilda’s departure and this was a family whose lives were spent moving between England and the continent.

So escorted by earls and barons, leaving her mother behind her, Matilda set off to marry Henry Duke of Saxony.

Who was Henry the Lion?

He was twenty years older than her, the same age as her own father. He had already been married but his first marriage was annulled on grounds of consanguinity. He was described as a fierce man by those who broke the law, he dealt out punishments swiftly and fearsomly, so maybe he was direct and clear in his demands which may have worked in favour of the young princess.

They were married on the 1st February 1168 when Matilda was twelve years old.

Whatever the nature of things between them she must have been made of strong stuff, like her mother because despite being so young he left her to administer his huge estates whilst he was away on pilgrimage. She did so when he went to the Holy Land in 1172, she would have been sixteen years old. 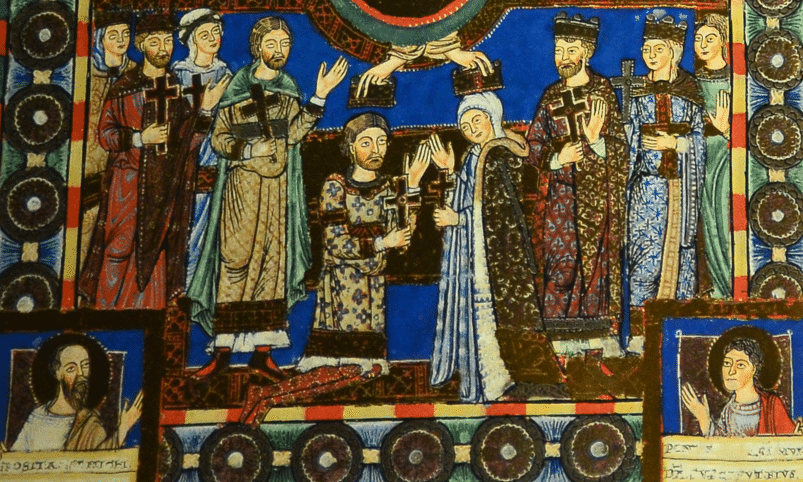 Wedding of Matilda and Henry the Lion

Matilda and Thomas a Becket

A fascinating part of Matilda’s story is the supposed role she played in establishing the cult of St Thomas a Becket. If, as it has been recorded, Matilda did encourage the cult in Germany, what would have been her motives?

The Cult of Becket was a far ranging and important cult for Western Christendom. Within a short time of his death, a hasty burial was performed and almost immediately hundreds of miracles had been reported in and around Canterbury. King Henry was harrowed by the death of Becket and the cult must surely have proved to be a constant thorn pricking his side. The growing cult serving as further proof of his guilt in the murder. The King’s penance at the tomb of Becket in 1174 was his atonement. So did Matilda, who loved her father, encourage the cult to show the world how her father had been forgiven by the martyr? Quite possibly.

Matilda’s actions suggest a strong, honourable and powerful woman, who knew her own mind. In the late 1170’s Duke Henry and the Emperor Frederick fell out politically. The quarrel was deeply wounding to Henry and Matilda. They were deprived of their lands and sent into exile. In 1182 they headed for the court of King Henry II in Normandy. It was recorded that he received them joyfully. Matlida was pregnant once more and when her husband left on pilgrimage to Compstela she stayed with her father’s court.

It was an important and heart rending time for Matilda. She and her husband watched her family split itself in half. Her brother Henry the Young King fighting against his father King Henry II. It resulted in the death of her beloved brother, Henry on 11th June 1183. The effect this had on Matilda must have been devastating, to see her father treated thus by her closest brother, only to have that adored brother die. In 1184 Matilda was pregnant again and gave birth to a son William at Winchester. 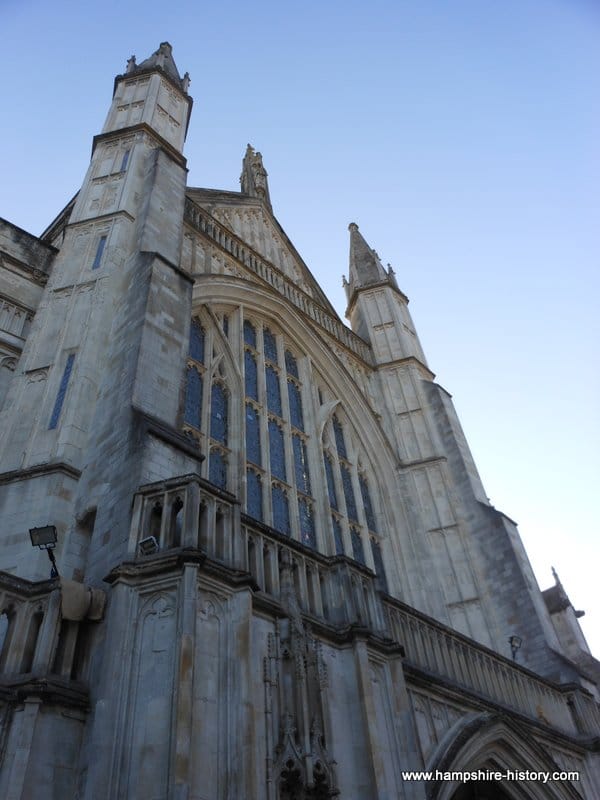 Where was Matilda’s mother, Eleanor of Aquitaine through all this?

Not only did Matilda have to watch her brother and father do battle she had to accept that her mother Eleanor of Aquitaine was complicit in all that had occurred. In 1174 Eleanor was returned to England and imprisoned, either in Winchester or at Old Sarum. Matilda it is said worked hard to ease the conditions of her mother’s imprisonment. Was that the reason why Matilda came to Winchester to give birth to her son William in 1184, so that she could be close to her mother? Eleanor was given permission to visit with Matilda and when Eleanor was finally allowed to return to France, it was Matilda who accompanied her.

When you read this of her, it makes you wonder if there was something of the diplomat about Matilda. She seems to have had a foot in all camps.

The Return to Germany

King Henry II meanwhile, was trying to secure their return to Saxony, through diplomatic pressure against Frederick. In 1185 they were allowed to return, after three tumultuous years in the court of King Henry II it must have felt they moved from one politically riven place to another. They must have had some doubts as to their position in Saxony because they made a decision to leave three of their children to be raised in King Henry’s court. This move was to have great significance. One son Otto, became the foster son of Richard I and was to become Holy Roman Emperor and the descendants of baby William, born at Winchester, would eventually pop up as Hanoverian rulers in the 18th century.

Life probably never as settled again for Matilda and Henry. She bore him at least six children and had been a powerful and loyal wife. Henry the Lion was exiled again in 1188 and the following year 1189, Matilda died, aged just thirty three years. Henry died six years later and the couple lie buried side by side in Brunswick Cathedral. 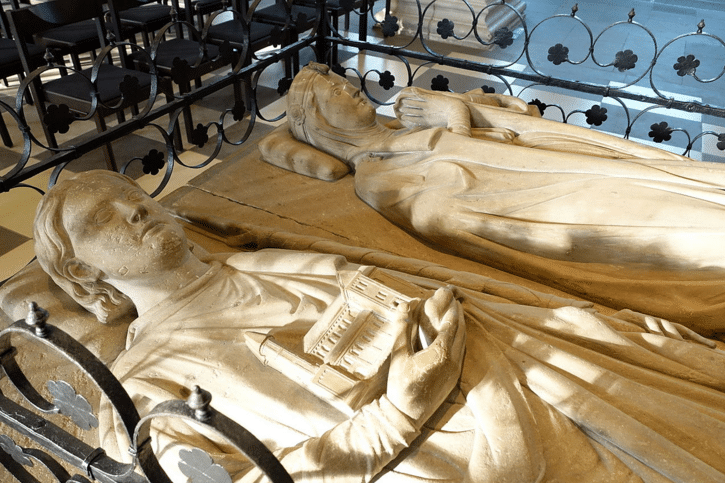 Tomb of Matilda and Henry the Lion

She was known as Matilda the pious because of her religious devotion but she was described before her marriage as being sweet and lovable, a good companion, with lively conversation. Her importance in holding the imploding and exploding Plantagenet house together should probably not be underestimated. She must have been a brave and forceful woman to deal with her brothers, none of whom were exactly nice or rational and how did you manage a mother such as Eleanor of Aquitaine or did she inherit a good deal of her mother’s strength and guile?

So, in conclusion, Matilda of England, of Saxony, Pious Matilda, lived through the exhausting reign of her father and mother but died before her father and so would never witness the 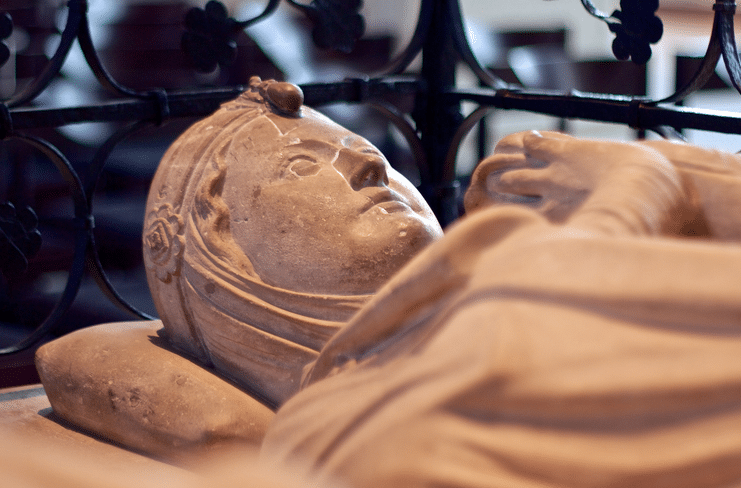 that followed his death.