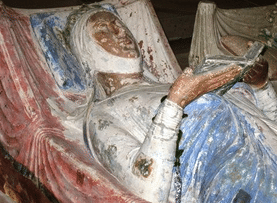 The often quoted ‘Behind every great man there’s a woman’, could be rewritten in many ways to throw new light on great historical characters. In this case the woman behind the famously great King Richard and infamously great King John, was their mother, Eleanor of Aquitaine.

The name Eleanor of Aquitaine, conjours up an image of a regal, elegant, beautiful, sexual, early Medieval woman but what lay behind the character of the woman who gave birth to two of the most well known kings of England?

Eleanor came from a very important dynastic line. Her father was Duke of Poitiers and by the time she was born in 1124, the dynasty had ammassed vast lands over several hundreds of years and was more or less operating as it’s own principality when at the age of thirteen in 1137, Eleanor was married to Louis, the son of King Louis VI of France. Both of these young people’s fathers died in the same year, leaving Eleanor and Louis with vast wealth,  lands and power.

So how was this marriage between Aquitaine and Paris received? Remembering that prior to the marriage, Aquitaine was more or less ruling itself, the marriage would have meant it’s fortunes being in some way controlled by Paris. For others in France, the joining of two such powerful regions would have suppressed their power base, so all probably did not sit well in France.

Eleanor the sexual siren of her time?

The child Eleanor then, quickly became woman. Accounts of her speak of a beautiful woman, with long dark hair and eyes and a slim and curvaceous figure. She was married to her husband for ten years before she bore him a daughter and it is thought there was no love lost between the two of them, from the outset of their marriage.

There then begins tales or otherwise of her infidelity. It is alleged by various chroniclers, Gerald of Wales and Walter Map, that Eleanor had an affair with Geoffrey of Anjou. This is a very important fact in the background of Eleanor, if true it meant that she had slept with her future father in law but what advantage would such a liaison have brought her? Maybe she was aligning herself with the family that she saw as becoming the most powerful rulers, whatever the truth of this allegation, relationships between Eleanor and her husband were collapsing.

Was she a bold, headstrong woman? Quite possibly, she went on the second crusade with her husband in 1147 but not to be by his side, her intentions were altogether different. She knelt in the cathedral of Vézelay before Bernard of Clairvaux and offered to raise an army of thousands for the crusade.
The Queen made it clear that her intention was to go on crusade herself attended by hundreds of ladies, to care for the likely wounded. Was she creating for herself the role of most powerful ruler, to show her husband as the weak and effeminate man she believed him to be?

She did not have it all her own way though, many thought the presence of Eleanor, her ladies, servants, cartloads of chattles and armour, a hinderance and rather ridiculous.
On reaching Antioch, Eleanor re-acquainted herself with her uncle,Raymond of Poitiers. This relationship may well have been of a sexual nature, there was certainly some sort of a relationship between them and when Raymond made the decision that recapturing Edessa would be the crusades best objective Eleanor jumped to his side despite her husband Louis determining to head for Jerusalem.

How bad was Louis’ humiliation?

Louis demanded that Eleanor fall in with his plan. Eleanor exploded with anger and denounced her marriage, calling into play consanguinity, that their shared ancestry made their marriage invalid.
Louis nevertheless continued to demand she follow him and Eleanor continued to seek an annulment.  Louis decided he had had enough and she was humiliatingly placed under arrest. The attempt on Jerusalem was a failure and one can only imagine what passed between them after that.  They returned home on separate ships and this was the beginning of the end for their marriage.

Louis was desperate for a male heir and Eleanor gave birth to a daughter in 1150, one year later Eleanors life took a decisive turn.

Henry, son of Geoffrey of Anjou, arrived to act as diplomat over a deal struck between his father and Louis concerning Normandy. At this point, Henry was unsure of his succession to the English crown through Stephen and alliances were there to be made.

It is very possible that the headstrong Henry, just eighteen at the time, sure his chance to grab a greater prize than Normandy, that of Aquitaine. Eleanor twenty nine, alluring, powerful and tired of her husband possibly saw her chance to make an alliance that would secure for her the throne of England.

Whatever the case, Louis had decided that she was unable to produce a male heir and the marriage was annulled in March 1152. Things then moved quickly, Eleanor and Henry were married in May, Geoffrey of Anjou had conveniently died earlier and Henry now was Louis’s superior in almost every way. Eleanor was rich and powerful in her own right, two supremely confident, arrogant and determined people, now had the alliance they desired.

Louis found himself in a defensive position and hit back at the couple trying to reassert himself,gathering enemies of the two but he was unable to conquer Henry and Eleanor who set their sights on England.

In 1153 Henry landed in England and Eleanor fulfilled her side of the bargain by producing four children in five years, three of them boys. Yet theirs was a tumultuous marriage, Henry was a philanderer and had many affairs but it was the way that Henry played fast and loose with Eleanor’s beloved Aquitaine that really upset her. He formed alliances with her ex-husband Louis and Aquitaine looked as if it were going to become part of the great Angevin empire.

It appears that Eleanor’s wishes in this matter were largely ignored and yet Aquitaine was the constant thorn in the sides of both Louis and Henry, both vying for control. Eleanor it appears may have had a separate game plan, with Henry almost a completely absent father, Eleanor drew her son Richard close to her side (although even she was absent for much of his younger years and he was left to be brought up by his nurse Hodierna), her oldest son William died aged three. 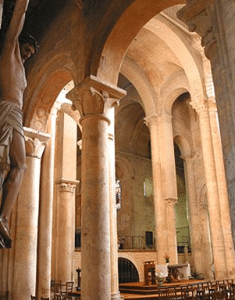 Richard was to become her saviour of Aquitaine and on reaching the age of fourteen, he was invested as Duke of Aquitaine. It was as mother and son they stood side by side, in the Abbey church of St Hilary in Poitiers, splendid, tall beautiful regal people and the crown passed from Eleanor’s head to Richard’s and then back, he was crowned with a simple crown that he would wear until her death. He received the lance, the banner of St Hilary and he swore to follow that banner on behalf of God and the church, the implication being that he would go on crusade. The thousands who had turned out for the ceremony were delighted and the whole affair became a festival of celebration.

Eleanor must have been rejoicing inside, she had managed to retain her beloved Aquitaine and had beside her her adored son but Eleanor was not yet ready to submit to anyone……

The next post will explore the unfurling of Eleanor’s most powerful game play yet, her rebellion against her husband and King…..

And what of Hodierna? What a remarkable and intriguing Medieval woman she must have been………………