Jul 3, 2012 / Comments Off on Iona heart of Celtic Christianity 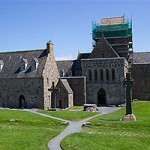 Iona what a beautiful word and spelling, it’s as if the word itself sings. Situated off the west coast of Scotland between Tobermory and the mainland, it is an island off the Ross of Mull in Scotland.  The name alone sounds ancient and whilst there is much debate about the origin of the name, it seems most likely it is derived from Latin  and the isle of Calum (Columba.) It was the community from which Christianity and conversion spread and with Lindisfarne was a religious centre for northern and western for several hundred years after its foundation.

A unique location in the history of Celtic Christianity, Columba visited and founded the community on Iona.  Having founded the monastery at Bangor around 558 and established a string of monasteries, Columba fell foul of the local Abbot by not falling in with local ecclesiastical politics. Abbots were often close relations of the nobility, politicians some  married and even funded their own private army. They were less spiritual, and more secular leaders. Columba was of a very different character.

Columba’s time in Ireland came to an abrupt end, with a dispute over a manuscriptthat led to a pitched battle (in the Battle of Cul Dreimhne) over ownership of the document. He fled into exile from Ireland with 12 companions and as a result came to Iona. He founded the abbey in 563 and brought with him the fine art tradition of Irish religious manuscripts which were the first examples of illuminated manuscripts, the fine work of the Irish monasteries and the craftsmen the monks had, become was spectacular. Fortunately we can still witness early examples of such work, most notably the Book of Kells which dates from around 800 and may have been created on Iona.

The creation of the community on Iona was important in the development of Christianity across the British Isles. Iona was the heart of the Celtic inspired christianity but it would that would compete with the Roman inspired missionaries who had arrived in England in Kent in the same period.

By 660 tensions in the traditions, rituals and customs between the two were already emerging and coming to a head. Examples of issues that caused these tensions included different calculations for the date of Easter and Christmas. These tensions would be resolved at the Synod of Whitby which was presided over by King Oswy of Northumbria. There were two chief protagonists for the Celtic and Roman traditions being Wilfred  an articulate debater on the Roman side with Colman who was now the Abbot of Lindisfarne another holy and important place from the Celtic tradition.

King Oswry who was also politically adept, conscious of Wilfred’s skills and the power and significance of the Pope in Rome. He declared that the Roman method of calculating Easter should be adopted. Colman and the majority of the monks from Iona decamped back to Ireland. This consequently weakened the position of remote Iona and the Celtic Cause in Northumbria. Whilst ostensibly the immediate issues were resolved in reality the divisions were only just beginning …

Iona together with Lindisfarne and the community established there by St Aidan was the driving force behind converting the Pagan communities in Northumbria. These communities became great places of learning and whilst it is not certain it is quite possible the stunning Gospel Book of Kells was produced here.

Iona thrived until the Viking Raids of the 9th Century, more than 40 Scottish Kings are believed to be buried in the Abbey.  The buildings and remains there now are largely medieval but there is enough from the ancient period that it remains an emotive, evocative and special place, isolated in time, landscape and location.

In the 9th century it became important to the Alba rulers who traced their own origin back to Iona, but then with the destruction and raids the religious relics were split between Ireland and Scotland and it would be abandoned until the medieval nunnery was founded and built around 900.

Iona is well cared for and preserved now, not open to cars it retains its special and splendid isolation.

In the traditions that emerge from Celtic Christianity we see important and persistent style, design and art influences that are still deeply rooted in Scottish Irish art today. Fine examples in the Gospel books of Durrow, Kells and Lindisfarne thankfully have been preserved providing great sources of inspiration more than 1200 years later. The division and differences between Ireland, Scotland and England’s Church and Christian traditions had also begun. The changes can be traced across the centuries but much of it started right here with Columba and Iona. 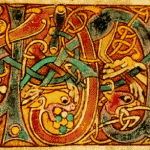