How the Higgs Boson Particle Was Found

Jul 5, 2012 / Comments Off on How the Higgs Boson Particle Was Found 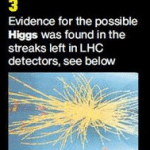 Could not resist what is now just about on the cusp of being history, well it is the next day now. Officially Higgs Boson discovery is just about, well technically history, that is also part of the future, or at least we expect it will be. But let’s keep it simple and on this historic day The Independent has not let us down with an easy to use Infographic and a leader article we can all get briefed, clued-up and confound our friends.

So here is our pin of that Infographic and a few salient and pertinent resources for those eager to find out some more, as the event and the experiments took place at CERN that is where we will map this to. Congrats and much admiration to the fertile minds and hugely collaborative science community that made this happen. What a feat of project management and be the way a few pointers in and around CERN at the same time…