Who were the people that made this journey?

Many of us around the world find we have a family history connection with Canada. In Britain we take it for granted that a branch of our family left their home country and set off for Canada. But what was happening at home to cause this migration? Where else were the migrants coming from and why and once they had arrived in Canada, what other factors then made them migrate internally? 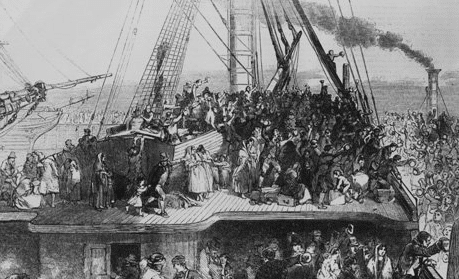 So what caused the Great Migration of Canada?

There were a number of factors at work that just happened to peak at the same time.

Firstly, the American War of Independence. Not all Americans during the War for Independence, wanted independence and many loyalists left America during and after the American Revolution. The British offered freedom to any slave who would join the British troops and 3500 of them came and settled in Nova Scotia. Native Indian loyalists who were worried about the loss of land if the British lost, moved to Canada and of course there were many Americans who did not favour independence from Britain, whose position in America became untenable.

Britain was in the middle of an Industrial and Agricultural Revolution. People were being squeezed out of the countryside and a rural employment and moving to the towns. It wasn’t always easy to find work though in an increasingly mechanized workplace. Conditions and pay were poor and labourers felt a sense of exploitation.

But industrial revolution was not just confined to Britain, Europe, America and Canada were also in the throws of industrial change. Skilled workers were sought after and tempting offers were made to British workers to take their chances at earning a good living in a new land and they took it.

In Britain, the end of the Napoleonic Wars released an enormous number of men onto the streets looking for work, just at the time when employment opportunities were stretched very thinly. Enclosure and mechanization of cottage industries such as weaving, meant more people were out of work and struggling to feed their families.

The mines in the south west of England were becoming depleted and families were moving en mass to other areas to find work. Some moved to the north of England others took their chance overseas.

In Britain the cursed Corn Laws forced the price of bread ever upwards and in Ireland, the horror of the potato famine gave people no choice but to leave and start over again somewhere else.

Even now many of us have few opportunities to improve our prospects and change our lives in radical ways. In the 19th century, many families had little to lose because they had nothing to start with. The offer of a chance of work and fresh opportunities must have seemed like a Godsend for families and individuals facing destitution and starvation. The prospect of going to a new country must also have been exciting. 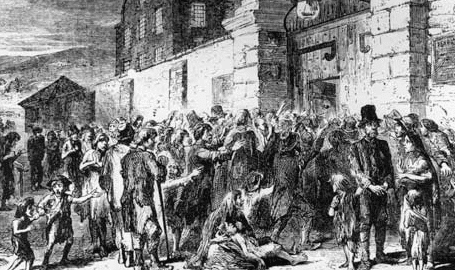 What happened after the period of the Great Migration of Canada?

The following You Tube link will give a real flavour of the politics in Canada during the 1830’s and puts into context the society that migrants were moving to
Intriguing Connections:
For more background and useful information on Canadian family history and family trees, follow the links.
To explore further Canadian posts, artefacts and useful resources and sources then go to Intriguing Family History