Egbert Anglo Saxon King of Wessex, what sort of a king was he?

Egbert was a warrior King of Wessex who managed briefly to dominate the other kingdoms between 802-839 when he died. This achievement should not be seen as a true unification of the kingdoms it was as fleeting in historical terms, as the supremacy of the Mercian Kings, Ethelbald and Offa. He had succeeded his father originally to the Kingdom of Kent (believed to be sAelmund.) He was a great encourager of learning and the liberal arts; which then, under the endeavours of Archbishop Theodore. Examples below show that he endowed the church generously but he was also capable of brutal acts. He was recorded in the Anglo Saxon Chronicle as the 8th King of the Bretwaldas.

Find out more about the context of his life on our Anglo Saxon timeline. 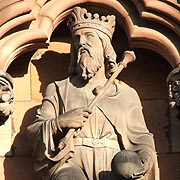 Key dates and events include:

Egbert’s permanent achievement and legacy was the amalgamation and incorporation of South-West England and Kent into the kingdom of Wessex.

It maybe that he had two sons Edric and Widred, who were both set aside, to make way for their uncle who usurped the throne on his brother Egbert’s death.

This was the important starting point which eventually formed the basis for  Alfred the Great to achieve the unification of England.

Additional references re Egbert in History

Not just a brutal warrior, Egbert cared for his daughter and appears he was a committed christian, given his endowments to the church which were many. There are also accounts that to ensure his certainty he had his own nephews put to death. Here are a few references and examples;