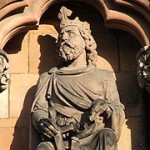 The reign of Ethelbert would be central to the adoption and conversion to Christianity across the British Isles. It also set an important precedent to how the role of the Monarch and the Church would be entwined which still continues in the UK to this day.

References and Resources for Ethelbert / Aethelbert