Wynkyn de Worde popularized the printed word but who was he?

William Caxton is the name that springs to mind when considering  the earliest printing presses in England but it was his assistant Wynkyn de Worde who, as publisher and printer, produced a larger output and who made popular the printed word as against the hand written manuscripts that had preceded them.

William Caxton worked as a mercer in Bruges, his business of trade probably included books printed by Gutenberg. Was it his keen observation that the new technology of printing was a business worth investing in? It would appear he saw the opportunity that the printing press offered because in 1469 Caxton learnt how to print so that he could bring the technology to England and persuade the nobility to buy his books. It was a brave move at a troubled time as England was divided by civil war. Caxton put his idea on hold but travelled to Cologne where he continued his study of the art of printing. Others in Europe were setting up printing presses and Caxton on his travels must have visited many. Somewhere along the line he met up with a young man who showed enthusiasm and promise, Wynkyn de Worde. 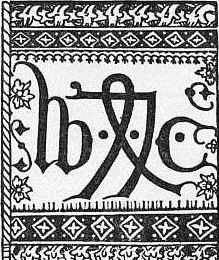 Where was Wynkyn de Worde born?

Depending on what you read, he was either born in a place called Worth in Kent the name is thought to have derived from its earlier name of Word or Worde, hence Wynkyn of Worde or he was a dutchman from Wœrden in Holland.  So quite a coincidence that his life work should be to do with words. Caxton was also born in Kent, did he know Wynkyn or his family from an earlier association or did he meet Wynkyn in Europe? Whatever the detail of their meeting, Wynkyn became Caxton’s assistant but even this may be misleading, an assumption. It seems to be of equal merit to consider that de Worde was a partner of Caxtons and that the work was shared in some equal way. The only thing we can be certain of, is that he died and was buried in St Brides Fleet St London. The skills of the printer

To become an early printer a person would have had to have had a great skill set. They would have been literate, able to both read and write. They needed technical skills, commercial skills. The initial market for books would have been the nobility, they would have needed to be persuaded to buy these novel items. Up until now the written word would have come to them in the form of a hand written manuscript, maybe richly illuminated. A book capable of being re-copied might not have the same cache. The printer needed a technical capability to manage the entire printing process. Many of the early books were translations so a knowledge of languages was also essential. Imagine then the determination of Caxton and Wynkyn to pursue this employment. The first book Caxton printed, and the first book to appear in English, was his own translation of the ‘History of Troy’, produced in about 1474 probably in Bruges. An essential skill was to have a ‘nose’ for the market, what the current taste was, what was likely to sell. Lastly the printer would have needed friends, patrons, sponsers, to open doors to the nobles who were the printers target market.

Caxton then made his move to England, bringing with him, Wynkyn de Worde. He set up his press in Westminster, at the sign of the Red Pale, paying his rent to the Sacrist of Westminster Abbey.

Hot off the press

The first item to be printed is thought to have been a Letter of Indulgence by John Sant, Abbot of Abingdon, in 1476. The first dated book printed in England, The dictes or sayengis of the philosophres, was completed in 1477, a translation by Caxton’s friend and patron, Earl Rivers. Sometimes the printers did the translations themselves along with any editing needed. Current fashion dictated what books they printed, certain religious writings, romance or poetry, books that gave advice or instruction were also favoured. Individuals also requested one off books to be printed and in this regard such customers served them well, an individuals patronage was worth a great deal. Caxton’s early books still had a place for hand finishing, the old manuscript tradition of rubricating, adding red ink to the letters can be seen in these early works. Those nobles that still wanted illuminated pages were also able to have them, space could be left to add them. In 1477, they printed Geoffrey Chaucer’s ‘Canterbury Tales’. A fascinating account of this can be found at the John Rylands University Library Manchester. Wynkyn de Worde worked with Caxton for fifteen years, until Caxton died in 1492. He took over the house in Westminster along with the press and types and grew the business, printing more than a hundred books in the next ten years. In about 1500 Worde moved his press to Fleet Street to a property in Shoe Lane at the sign of the Sun. He rented two properties, one to live in and the other as his printing office. The press operated in the church yard of St Brides and while this might seem to be an odd choice, church yards at this time were full of traders and lawyers plying for business, perfect for the printer. Here worked the book binders who would take his work and encase it in splendid leather covers. Wynkyn de Worde was described as a person of great accomplishments and morals, who continued to advance his techniques after Caxton died. He formed new types cutting and casting letters of the finest quality. There has been a suggestion that he had his own foundry in which he cast his letters and that other printers also began to use his type. He was the first person to use Roman letters in England, to single out pieces of writing. He was known for his neat and elegant work. See some images of his work at the Folger Shakespeare Library . His woodcuts, used for illustration purposes were also beautifully worked, making the whole book an elegant piece.

Click here to see a beautifully drawn map, showing Fleet St as it was in Wynkyn de Wordes day. 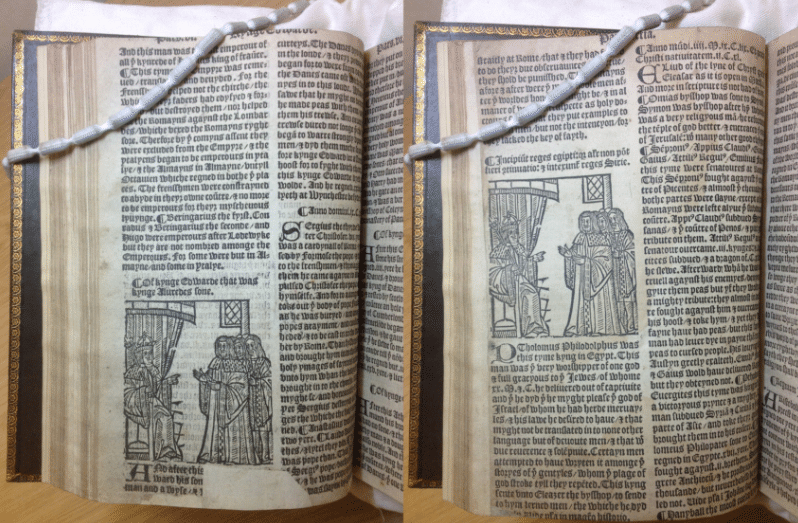 Book printed by de Worde showing the use of woodcuts to lift the page.

Richard Pynson, a colleague and friend who also worked under Caxton, set up a printing business alongside, the two remained friends until Wynkyn’s death. Other printers and publishers followed and the tradition of Fleet Street being the centre of printing and publishing was born. Wynkyn was a networker though, he understood that he needed the help and input from many crafts people, bookbinders, book sellers, artists, writers, translators, business people, backers and many more besides. Papers left a trail showing that he was in contact with such people all over Britain, in Oxford, York and Bristol, as well as in Europe. He was a prolific printer, bringing to the public over 800 works across a whole variety of topics including children’s books, books on animal husbandry as well as romances and history. His contribution to printing was immense and he should be remembered as an equal to Caxton at the very least. 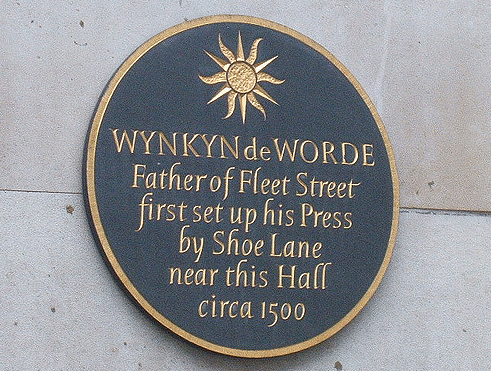 The death of Wynkyn de Word

Either at the end of 1534 or the beginning of 1535, Wynkyn de Worde died at the close of the year 1534 or the start of 1535.  His will, dated 15 June 1534, was proved on 15 January 1535. He was buried in the Church of St. Bride, near where he worked. A grave believed to be that of Wynkyn was discovered in the middle of the C20th. John Byddell and James Gaver, two of his assistants, were made executors and continued to print in the same premises. 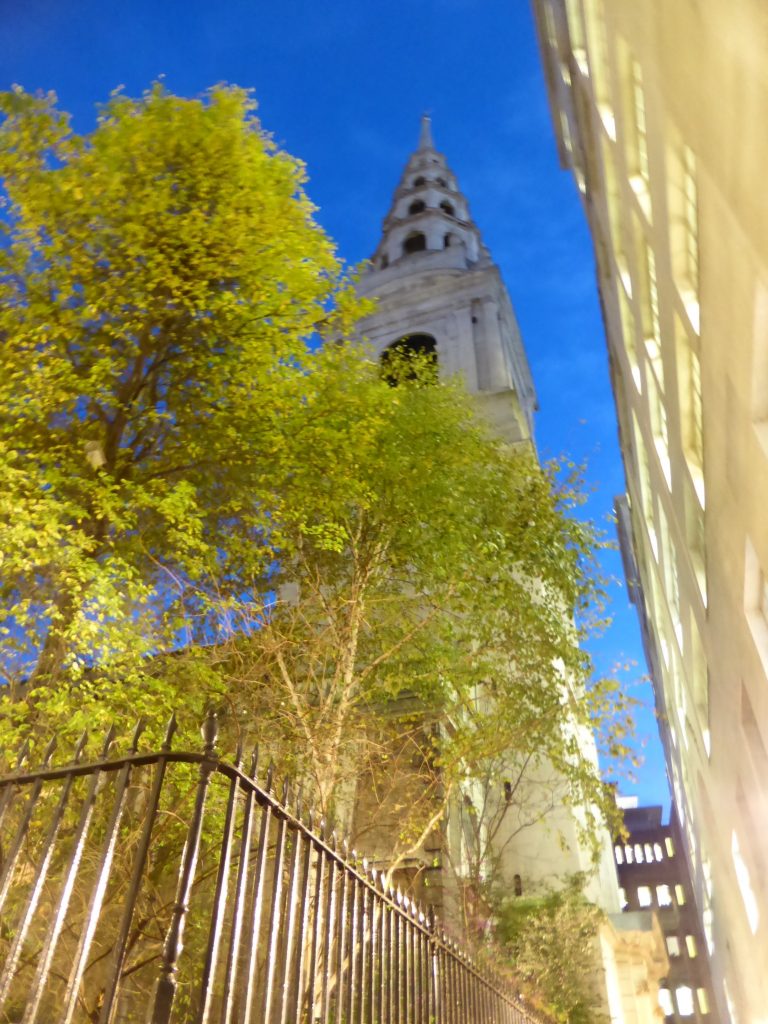