Aug 1, 2016 / Comments Off on Book of Kells Medieval Masterpiece

The  Book of Kells completed in about 800AD is a mesmerizing Medieval work.

Imagine the Southern Hedridean Island of Iona, just 1.5 miles long and 3 miles wide, treeless, battered by the fierce winds, life hard earned by the monks who created this beautiful piece of literary art. Each working in cold stone built structures, the light poor and the silence deep, they began to write and draw the finest Medieval book in Europe. 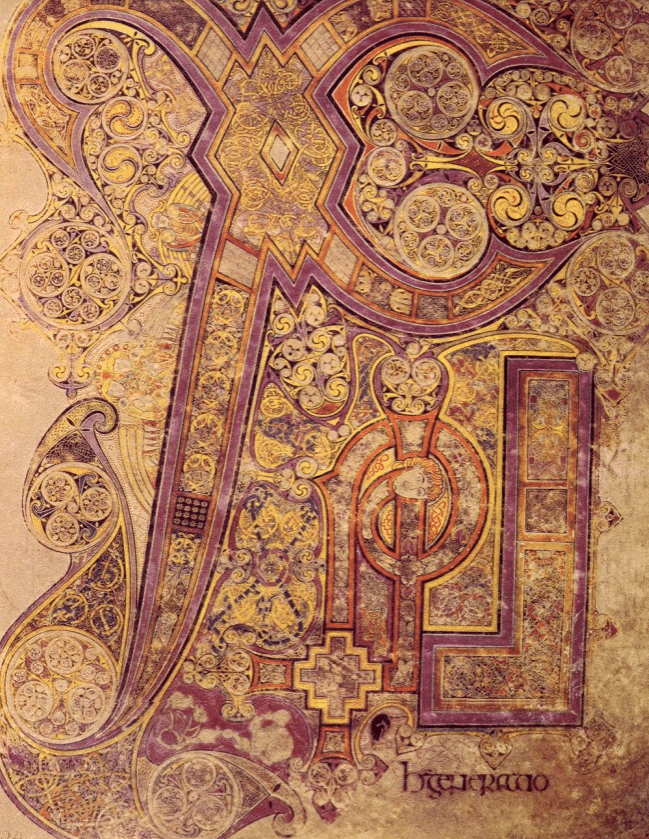 This unique book, is a masterpiece of contemplative art, design and devotion but how did it come to be written?

In 563AD we are told that an Irish prince, Colum Cille, arrived on Iona having fallen foul of the ruling family in his part of Ireland. Colum Cille or Columba as he is also called  Columba, was a scholar and a skilled scribe who was judged to have made a copy of the Psalter of St Jerome and thus infringed copyright. He would not accept this judgement and he, his family and supporters fought a bloody battle to protect his right to keep the book. Many lives were lost and Columba and his cohort fled, settling upon the Island of Iona. Could such a thing have happened over a book? Books at that time were treasured possessions, highly valued and so yes it was possible to imagine such a scenario. 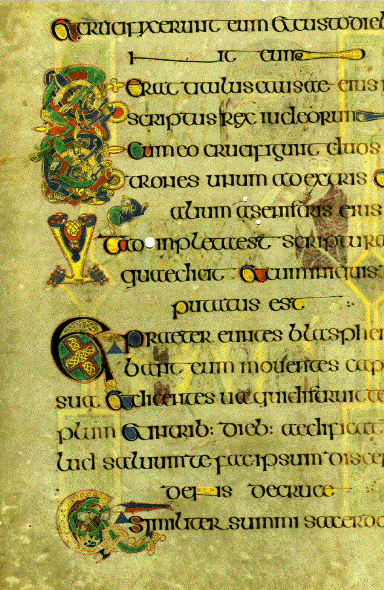 Text from the Book of Kells

Columba valued the skills of the scribe

And so began a community where such skills were valued. Columba himself a deeply religious and by all accounts charismatic figure established a church on the island and a tradition of devout living and scholastic pursuit was born.

Where was the book written?

In the year 806AD,  the Vikings raided the island of Iona. Many of the monks were killed and those that were able to escape, took refuge in a new monastery at Kells in County Meath. So did the monks flee with the book, finished or unfinished? The book was written about 800AD  but there is no way of knowing how complete it was when the monks fled. It must have been started during the period the monks were on Iona, what an achievement to bring it to a point of safety at Kells. 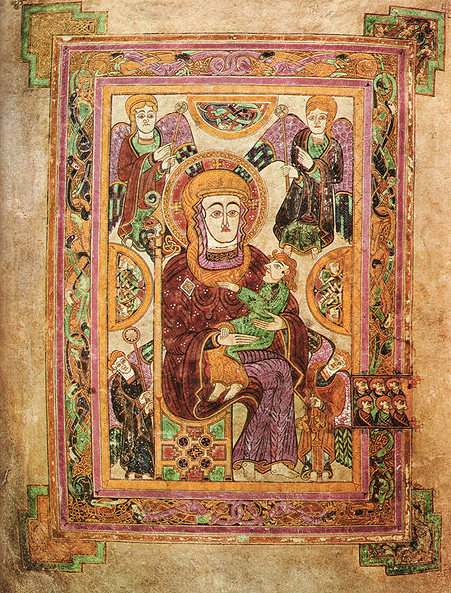 The Book of Kells was completed by 800AD

The book is the outstanding example of Celtic Christian art of this period. It contains four Gospels with 2,100 ornate capitals illuminating its pages, with rich and vibrant colours and incredible detail covering each of the thirty three leaves. It is estimated that it took the skins of 185 calves to create the smooth vellum on which the illustrations were laid. This vellum would most likely have to have been brought in from elsewhere, the bright inks, the blue of woad or indigo, vivid yellow, red lead, copper green, all would have had to be brought to the island. This was a major document of its time, taking thousands of hours to produce, by some miracle it survived the Viking raids and although it has a number of missing pages,  it is safely lodged at Trinity College Dublin in Ireland, having arrived there in 1661 and can be viewed by the public. 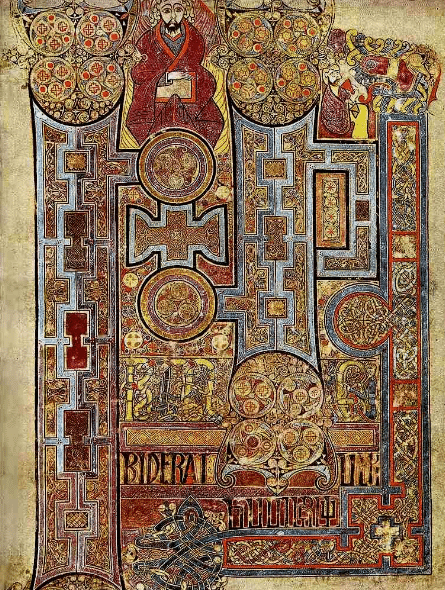 The book is well known for its hidden images tucked in amongst the religious illuminations, cats, rats, moths and in the Gospel of John, a man sits drinking wine from a goblet whilst a mythical beast with a long tongue looks on, almost as if to drain the wine from the glass but the man appears too engrossed in his cup to notice. 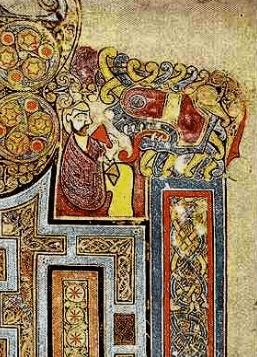 How do we know of its exceptional quality in its own time?

In 1006 the Annals of Ulster  records the theft of a manuscript, this is thought to have been the Book of Kells.

The Great Gospel of Colum Cille was wickedly stolen by night from the western sacristy in the great stone church of Cenannas. It was the most precious object of the western world on account of the human ornamentation(?). This Gospel was recovered after two months and twenty nights, its gold having been taken off it and with a sod over it.

Giraldus Cambrensis  circa 1200AD, describes a manuscript he says he saw in Ireland which is generally thought to be the Book of Kells

This book contains the harmony of the Four Evangelists according to Jerome, where for almost every page there are different designs, distinguished by varied colours. Here you may see the face of majesty, divinely drawn, here the mystic symbols of the Evangelists, each with wings, now six, now four, now two; here the eagle, there the calf, here the man and there the lion, and other forms almost infinite. Look at them superficially with the ordinary glance, and you would think it is an erasure, and not tracery. Fine craftsmanship is all about you, but you might not notice it. Look more keenly at it and you will penetrate to the very shrine of art. You will make out intricacies, so delicate and so subtle, so full of knots and links, with colours so fresh and vivid, that you might say that all this were the work of an angel, and not of a man. 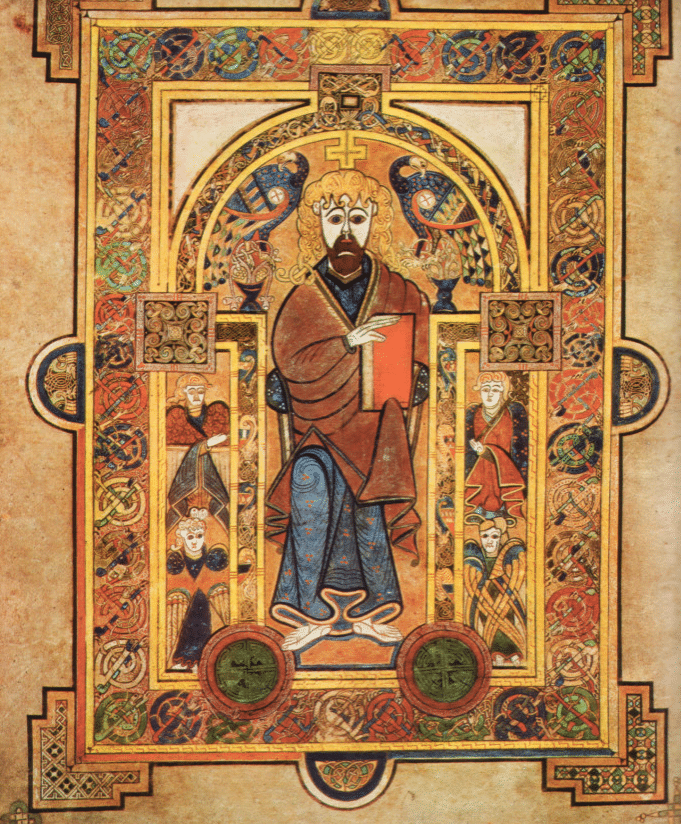 Context for the Book of Kells

The Book of Kells provides comprehensive evidence, should it be needed, of the sophistication of art, craft and design early in the history of the British Isles.  This Celtic Art is very  different from the Roman Christian influenced works that we might expect of this period. This casts a very different light on the Anglo-Saxon period, previously cast as the ‘Dark Ages’ as if culture and progress stopped, or even went backwards, when the Romans retreated from Britain and Northern Europe. It could be argued it was a much ‘illuminated’ period which kick-starts the Medieval period of Art and competes ably with many later works of illumination.