The Twelve Great Livery Companies  (12) were originally of the nature of guilds and have played an important part of the culture that makes England what it is today. They date from Saxon times  and were usually of a religious kind. They were established to provide a sort of mutual assurance for their members, societies that would take care of their members when they were in need. Before poor laws were introduced it was up to each community to look after it’s own, independent of social class, whilst, at the same time not ignoring the practice of religion, justice or morality. It was rather like being part of a family, where people could call on the support of other members if they were ill, in trouble or were in any way in need. 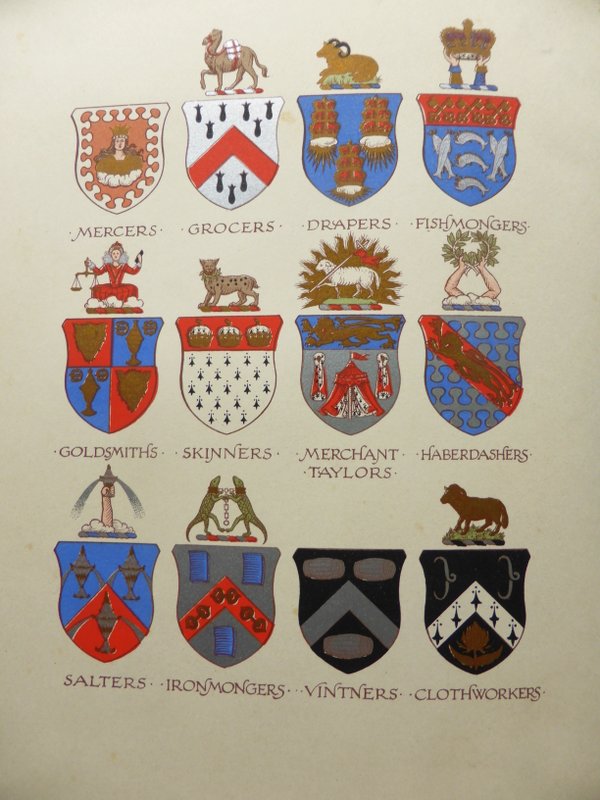 The Livery Companies of London ran in a similar way to the guilds, they had accumulated property and possessed magnificent halls. Charters were granted to them in return for large sums of money advanced to the national exchequer by the Companies. Legacies were bequeathed to the companies for the care of their poor and infirm members and thus they became responsible for administering large charities for the benefit of the poor in London.

The Livery Companies are listed in order of precedence, as decided by the Lord Mayor of London in 1515.

The links will take you to more information about the 12 Great Livery Companies and tell you more about each companies history.

There are also in addition, 61 minor companies and many others now extinct.

Some of the companies still perform some useful function in connection with the trades whose names they bear, for example the Stationers Company brings together a complete range of trades within the Communications and Content industries, from paper, print, publishing, packaging, office products, newspapers, broadcasting and online media.

There are also newer and emerging companies, an example being the Worshipful Company of IT, featured in our article on Dame Stephanie Shirley, a pioneer of the modern IT industry in Britain.