Considered by many to hold first place in the rank of the Livery Companies, the illustrious names on its roll of members,  charitable associations and trusts, it can have a justified claim to its position as such. 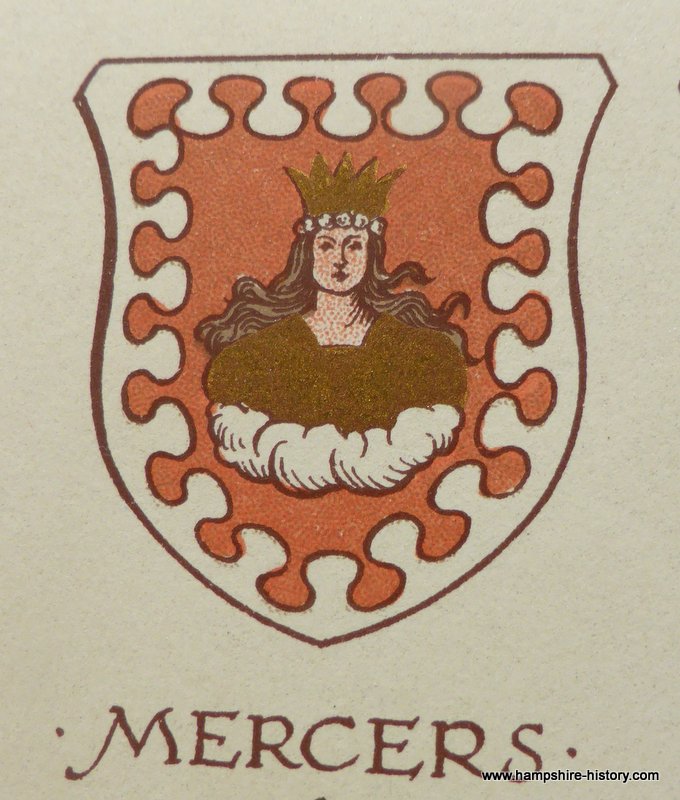 Its corporate existence began in the form of a fraternity at least by the reign of King Henry II if not before. Gilbert a Becket, a crusader and father of Archbishop Thomas a Becket. He was a mercer and had his shop on the site of the present hall in Ironmonger Lane. The Becket connection does not end there, the sister of St Thomas, Agnes de Helles and her husband founded the hospital of St Thomas of Acon on the same spot. It served the knights of St Thomas Acon a small group of knights formed on the model of the Templars. Until the Reformation the hospital and the Mercers’ Company were closely connected. The hospital was the meeting place of the Livery Companies on many occasions. They went from here to church at St Pauls. They met in the hall and worshipped in the church of the hospital and sometime in the 15th century purchased part of the church for their chapel and a room for their own use. The chamber bought in 1413 was the first hall of the Company.

In 1210 – 1214, the first two Mayors of London, Henry and Robert FitzAlwyn were claimed to be members. An interesting branch of the company was established at this time, the Company of Merchant Adventurers, who established themselves at Antwerp, the centre of the cloth trade. 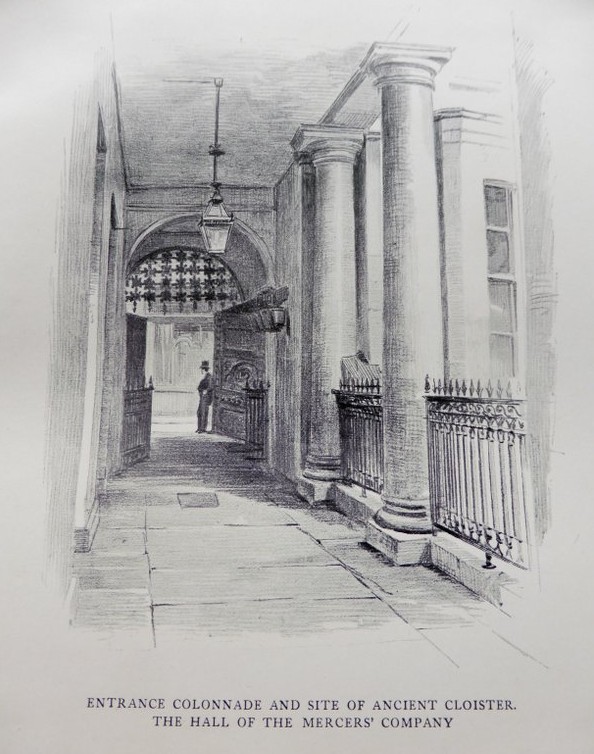 King Edward granted this company a charter in 1296 and its motto, below, has been adopted in spirit by the Mercers’ Company.

So what was the Mercers’ Company for?

The name ‘Mercer’ is from the Latin, mercator, a merchant. Distinguished from the pedlar of goods, these were merchants who traded a wide assortment of goods, linens, woollens, furs, silks, wood, oils, wine, salt, lead, the list is endless. The company was recognized in 1347 when a set of rules was established for;

All the good people of the mercery of London

These rules would preserve the unity and profit of ‘the mystery’. In City Company terms, the former guilds were often referred to as ‘mysteries’ on account of their observance of religious practices, in particular the Mystery Plays.

Four Masters would be chosen annually to rule and govern the brotherhood and rules for the payment by members and apprentices were established. An annual dinner would take place and if any member be reduced to poverty by an accident, debtors or sickness then he would be relieved by the alms of the Company. 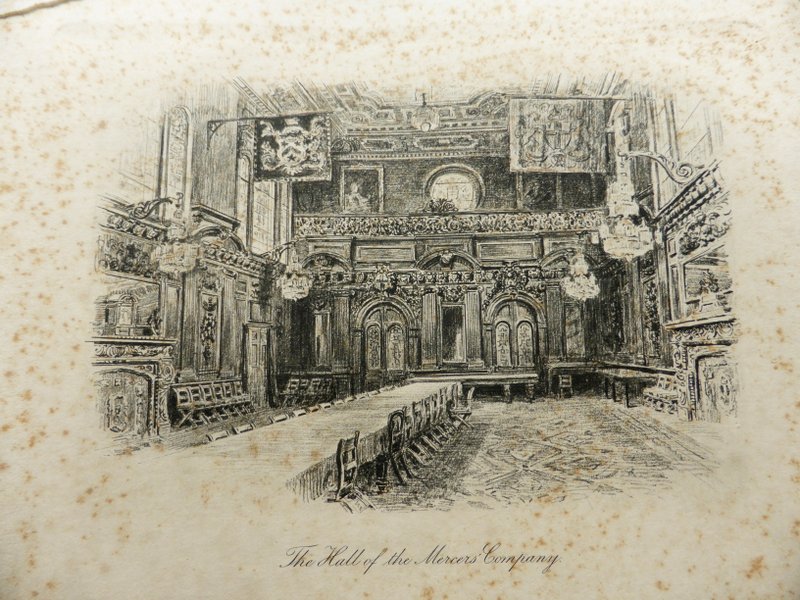 In 1393, in the reign of King Richard II, the company received its first charter.

In 1517 they began to build a new hall and chapel facing out onto cheapside, with, at its back courtyards and gardens and the church of St Tomas. In 1538 the Mercers bought the hospital buildings. Sir Thomas Gresham (founder of Gresham College)  part funded the purchase and the church became the Mercers chapel.

Sir Richard Whittington, the famous Lord Mayor, appointed the Mercers as trustees for some of the charities he bequeathed, such as Whittington College and the Almshouses. As the centuries unrolled the business of the Mercers’ Company expanded along with the expansion in trade routes during the 15th, 16th and 17th centuries. 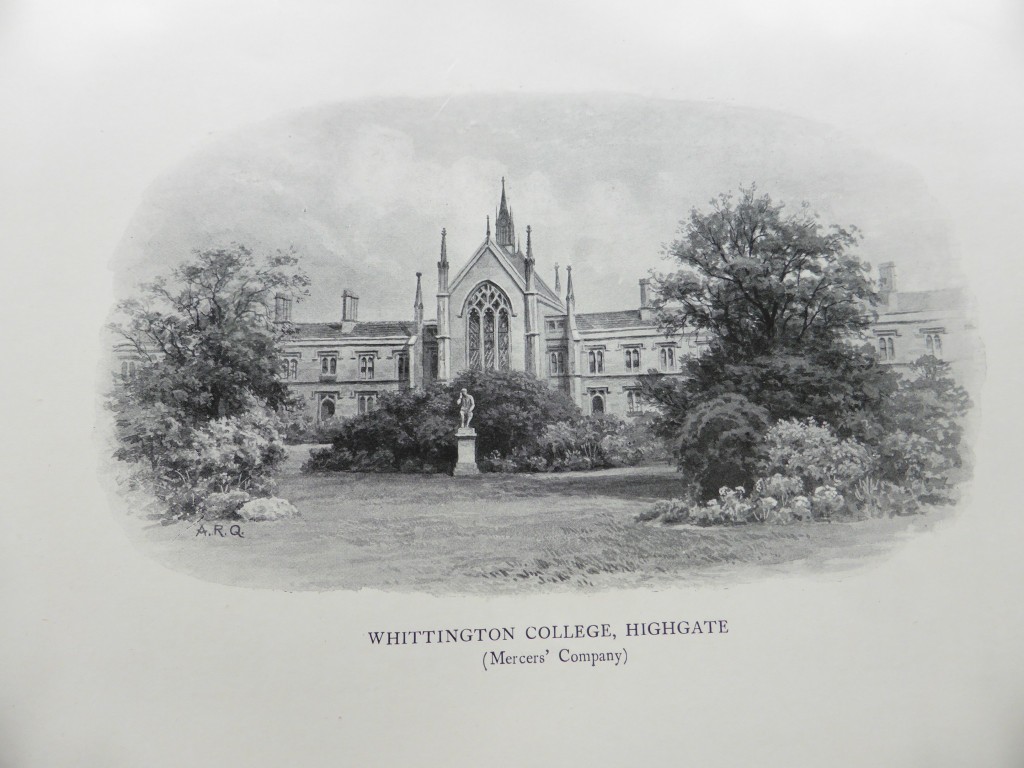 From time to time, the Company advanced money to the Royal Exchequer for the purpose of defense or war. In 1467 for example the company gave 560 marks for the defense of the sea and in return was allowed the privilege of free import and export. They also had to bear their share of ‘forced’ loans, that is demands made by the sovereign. Queen Mary and her husband Philip demanded £100,000 for the war with France, of which the Mercers had to bear a significant share. After the Petition of Right, these forced loans came to an end but until then the Companies were fair game. 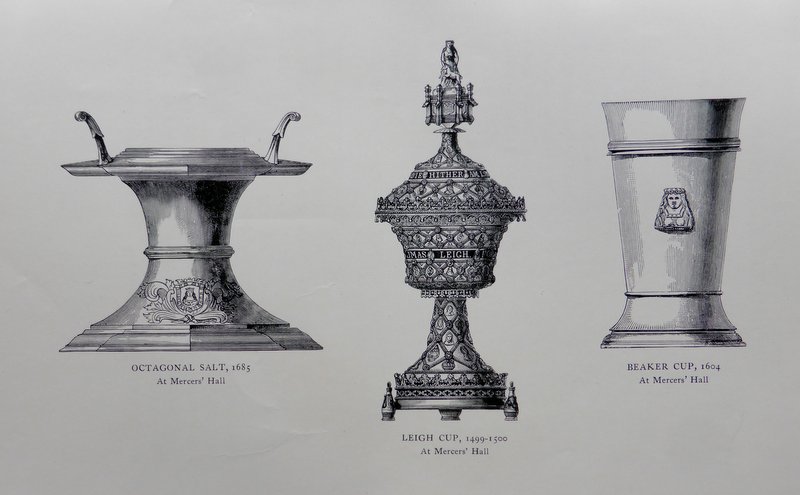 At the time of the Dissolution, the Mercers’ Company was required to return all the chantries, chapels, colleges associated with them as well as their jewels, silver etc. The Company then bought it all back from the King. Further decline in the Company as trade declined and the order was sent out from the company to sell as cheaply as possible. Then came the Great Fire of London and the Mercers’ Hall and all its property was destroyed. Even then though, the Company was wealthy enough to contribute £65,979 to the cost of re-building the Royal Exchange. Only Gresham College was saved and the Mercers were able to move there after the fire. The Mercers re-built their hall and school and most of the present buildings date from this period.

The Company began to fall into debt so that the beginning of the 18th century they were insolvent. They had loaned money out to help public services in need but many of these debts had not been honoured, now all those who the Company sought to assist were in distress. Parliament was called to help and it was in lieu of these loans that Parliament agreed to a yearly grant of £3000 which came out of the coal dues of the City of London.

The prosperity of the Company recovered and their property estates gradually increased in value.

Something interesting to note, the Mercers Hall was the place where the Council of Trade (Board of Trade) first met in 1660 and where the Bank of England held its first meeting in 1694 and the East India Company in 1698. 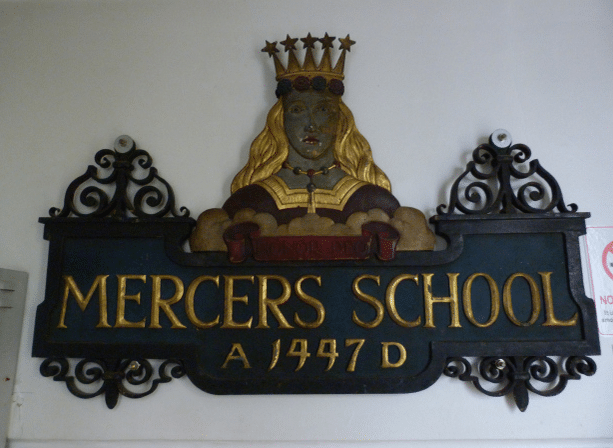 Benefactions to the Mercers’ Company

One of the most important was St Paul’s School founded in 1508. Another of the educational institutions associated with Mercers is the Mercers School one of the oldest in England. Other schools in the country also benefit from its largess. Gresham Collage bequeathed property to the City of London Corporation and to the Mercers for endowing lectures n divinity, astronomy, law, physics, geometry, music and rhetoric. Still going strong today.

So many charities still benefit from the work of the Mercers’ Company, the old obsolete charities are put to new purpose and service, amazing to consider the achievements of such an ancient organisation.