The old music halls that once flaunted their talents across the pavements of London and other cities, no longer exist.

The old music hall grew from the lives of the people who lived upon the streets, it was an earthy, racy place. In essence it sprang from the people, its performers, its bards, its impressarios, came from within their midst. The music hall represented a certain national outlook and certain characterisitcs. It became an institution. 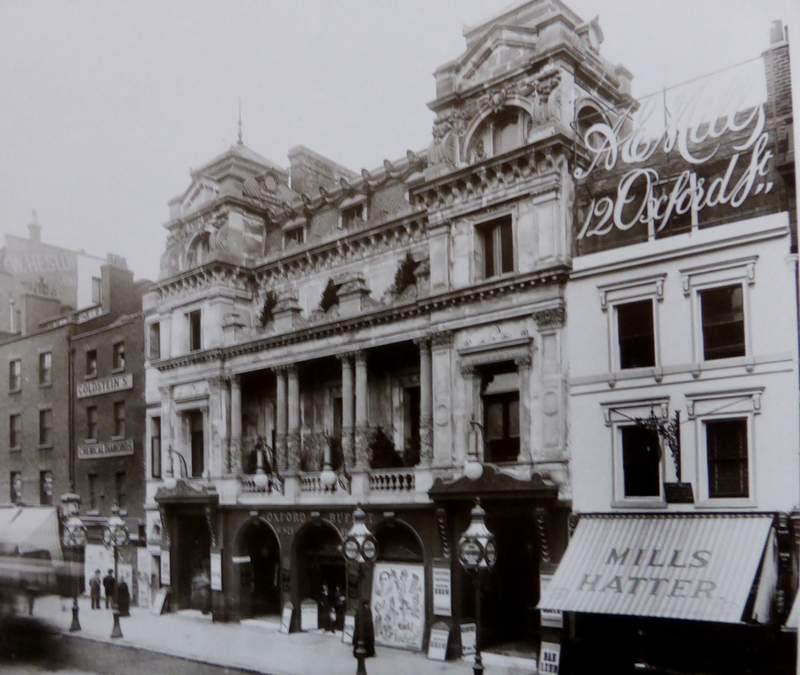 The music hall did not start out in life in the guise it is remembered now. It began informally and it was this informality that gave it its heart. They were known as ‘free and easies’ and it was that light unfettered pleasure that appealed to the audiences. Initially there were no programmes, each act was introduced by a chairman who would sit at a table, his back to the stage, facing the audience. The chairman became a part of the act itself, larger than life Bacchanalian type characters who gripped the audience and controlled the acts. He was the link between the act and the audience, the tavern sing song evolved into the variety palaces under his artful orchestration.

But what made the music hall buzz, was the people. The acts, as many and varied as can be imagined. Women whose courage to stand and perform was quite astonishing. The old music hall actors were of the soil. It took characters to fill the parts that needed to be played and the number one part was the chairman.

Mr Fox, chairman of the Mogul in Drury Lane

King of all the chairman was Mr Fox of the Mogul. A tavern called the Mogul existed from the 17th century on the corner of Drury Land. The Glee Club held its meetings and sing- alongs in an adjoining hall, which then became the Mogul Saloon in 1847. It then became the Middlesex Music Hall (such a shame, the Mogul Saloon sounds so much better) in 1851 and could sit 500 people. Whilst it was the ‘Old Mo’ though Mr Fox held court. It was a rough crowd that turned out to listen and jeer at the acts but Mr Fox was more than equal to them. He would glare and roll his eyes at the behaviour of the roughs from the Lane and command them imperiously to desist from their raucous behaviour.

Bill for the Middlesex Music Hall

As the chairman held the stage so the manager held the success or failure of the music hall by hiring the acts people wanted to hear. Characters such as a Mr Hart, who managed the the Star music hall in Bermondsey who would hire his acts from those out of work professionals who would congregate on the corner of York St on a Monday morning. Those acts that failed to come up to scratch were frequently ‘taken for a ride’ and literally dumped miles away from the hall,  only to turn up late for their act and promptly fired. Competition between music halls for top acts increased as the free and easies gave way to a more professional institution. The Variety Palace advertised itself to the world in the form of brightly coloured and luridly written poster art. Some of the most expressive was the work of George Belmont, an impresario who opened the Sebright in 1885 and who drew up his advertising bills in his own hand. He gushed with alliterative alacrity.

The Vigorously Voiced Vehicle of Vivid and Volatile Variety, Void of the Vestige of Vulgarity

Many of the old music hall acts teetered on the edge of vulgarity and the Victorians, possibly those who rarely went to the music halls were askance at what they considered the lewd lyrics and acts performed. George Belmont was at the forefront of  purging his acts of offensive language, in his own extraordinary words.

The proprietor will peremptorily punish all performers playing putrid programmes by promptly prohibiting their performance and pocketing all promised pounds and pence. Dirty ditties, wicked wheezes and gone wrong gestures no go here. We want willing workers, who will work wholesome wares without wrong uns.

Many music halls  had a short lived life.

The Oxford, Tivoli and Pavillion were fairly representative of their type. In these places the songs of the people were sung, the catch phrases that would bounce from barrow boy to organ grinder on the streets, were born in these music halls. The programme was, by and large a commentary on British life on the street. The topic of the day was quickly put into lyrics and mirrored back at the audience. The average composer of such songs would have made a regular but by no means large income from their creations. Some were regular writers for big stars and therefore fared better. The knack was in hitting the public taste at that moment in time, come up with a cheery tune for the boot boy to whistle and you could earn good money. The chorus needed a few repeatable phrases which could be learnt quickly by heart and a catchy tune. Many of us even today can sing a few bits of chorus from music hall songs such as, ‘A bicycle made for two’, ‘Two lovely black eyes’ or the song made famous by Lottie Collins; 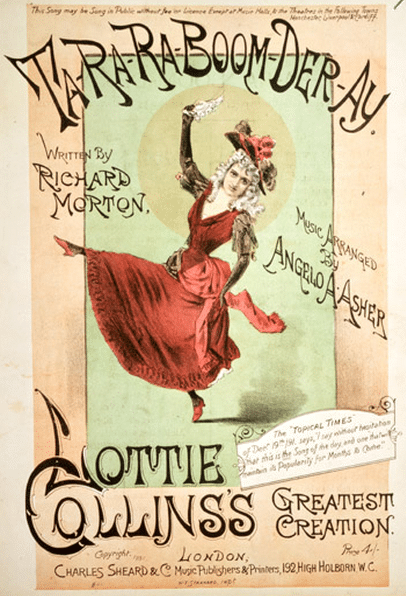 Other music halls such as the Empire and the Alhambra were a cut above the rest and the Palace was in a class of its own. These old music halls would have had the pick of the top artists. The Empire was described as the ‘Cosmopolitan Club of Empire’. Meeting at the old Empire became part of society life for the male punters who made up the bulk of the audience. At these places the acts included ballet and opera but still the sheer number of performers was staggering, comedians, mimics, mime artists, acrobats, musicians and singers all performed in the music halls. The Music Halls and Theatre History website will give you and excellent overview of London music halls. The Victoria and Albert Museum has a marvelous collection of music hall memorabilia

The music hall was a short lived phenomena

No sooner than it became fully fledged, was the music hall taken down from the sky. The invention of moving pictures saw many of the old music halls replaced with silent picture houses and those old songs, crude as they might appear, which had some semblance of real life about them and were, in many cases satirical, were replaced. The music hall performers knew which buttons to push, they could respond to a mood of the people if not the country, overnight. It was a robust art form which captured the national disposition, something that the new silent movies could never do. The rawness of the artist on stage performing from the heart would be overtaken by characters who would never know their audiences and would never capture the essence of the people on the streets of Britain.