The Gin Act 1751 is a reminder that drunkenness on the streets is nothing new.

London has always been a magnet for people wanting to improve their chances in life.  The early 18th century rural economy was already beginning to creak and groan under the yoke of enclosure and agricultural revolution. More people were seeking opportunities in the great metropolis but alas, conditions for many, trying to make a living, were appalling. Poor housing, poor food, little clean water and scant public sanitation, took its toll on the population. The squalid, overcrowded, disease ridden slums, made life pretty unbearable for Londoners, little surprise then, that they sought solace in alcohol. A way of numbing the mind to the true foulness of their situation. 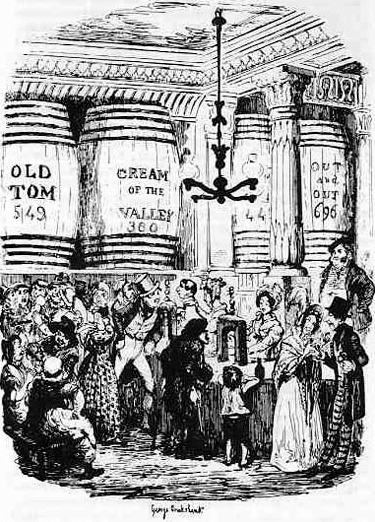 The Gin Craze, men, women and children all imbibing.

So how and why was gin associated with the poor in London?

Beer has been drunk by the British since the beginning of time. The alcoholic content of much of the beer drunk, was, in the main fairly low. When the Dutch King, William III came to the throne in 1688, he introduced Dutch gin. Gin had been distilled in Holland for medicinal purposes, since the turn of the 16th century, when juniper berries were distilled and added to other ingredients to make it taste better. The people loved it and soon demand for the new medicine, the ‘genever’ was so high that a commercial version of the product was made. Dutch sailors would carry a bottle of this elixir, attached to their belts and the British sailor noted how courageous the Dutch were in battle. They had had a drop of ‘Dutch Courage’ and the British sailors wanted a taste. King William actively encouraged the distillation of English spirits. Anyone could distill gin by simply posting a notice in public and waiting ten days before commencing production.

The hand of government in the escalation of gin production

By the end of the 17th century Britain was at war with France. The finances of the country were yet again strained and parliament placed heavy import duties on foreign spirits and at the same time lifted the duty on domestic spirit production and ensured a market for home grown grain, much of it poor quality. The doors for small distilleries were blown wide open and a desperate mass of poor people in London welcomed it with open arms. By 1730 an incredible 10 million gallons of gin were being distilled in London each year, with each Londoner drinking an estimated 14 gallons each year. Already by the 1730s, over 6,000 houses in London were openly selling gin to the general public. The drink was available in street markets, grocers, chandlers, barbers and brothels. Of 2,000 houses in one notorious district, more than 600 were involved in the retail of gin or in its production. An estimated 6,000 houses were distilling the alcohol and it was being sold through all manner of outlets including barber shops, brothels, street markets and chandlers. A dram of gin cost a few pennies. A population became addicted to gin but on the positive side, paid for their share of the war effort. On the negative, it destroyed the health of the people, created misery in its wake, with high crime and prostitution rates. Infant mortality rates increased along with adult, in all it was a disaster. Children drank too, maybe it eased the terrible neglect in their lives as their parents lay drunk or driven mad by the spirit. 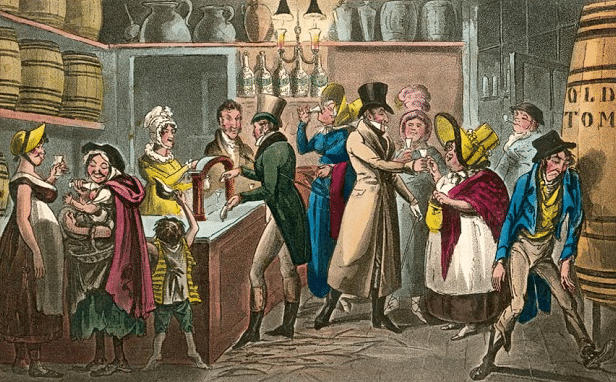 The Gin Act of 1736 taxed retail sales at 20 shillings a gallon and all those selling gin had to buy an annual £50 licence. This put ‘good’ gin distillers out of business and saw the rise of illegal distilleries that brewed evil liquor. The alcohol brewed from grain is tasteless, the juniper added the distinctive flavour but in the illegal gins, juniper was left out and turpentine and sulphuric acid added. The madness continued, it took the works of William Hogarth and others like him to expose the situation for what it was. Hogarth’s satirical picture Beer St and Gin Lane was published in 1751 and the Gin Act was passed in the same year. The licence fee was lowered  and distillers had to sell only to licensed retailers. Grain prices were also increasing, suppressing poor peoples wages whilst ensuring a better return for landowners who could now do without income from grain to make gin. Production of better quality gin increased but there was still the odd illegal gin being produced, ‘Old Tom’ for one which was sold under the badge of a black cat. 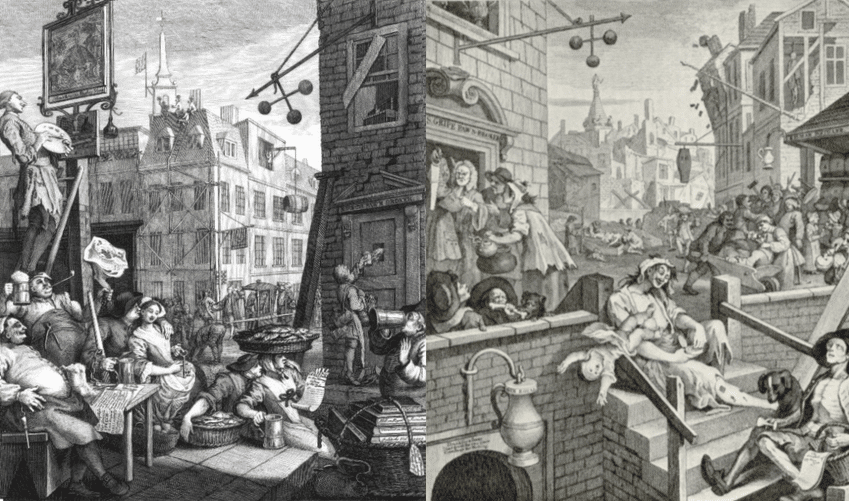 Take time to look at the painting. On the left is Beer St, the national ale with its moderate alcoholic content in its day, refreshes the hardworking labourer, induces a state of well being, makes artisans more productive etc. On the right is the ruin of ‘mothers ruin’. Babies dying of neglect, immoral cruelty, see the baby run through with a spike, murder and suicide depicted by the hanging man. Unproductive people, the woman with syphilis, buildings in a state of collapse. The message of the evils of gin drinking was made very clear.

Effectiveness of the Gin Act 1751

Consumption certainly fell but probably due to a number of factors, not least the fall in income amongst the urban population. The governments concern for the growing immoral state of the population was probably less of a deal than is assumed. If the government had needed to boost its revenue, the likelihood of them controlling the market recedes. Then in 1757, Parliament made a decision to forbid the production of distilled spirits. This ban was imposed in response to a bad harvest. So by 1757 the ‘Gin Craze’ was over. The ban was then lifted in 1760, at which point Parliament more than doubled the existing duties on distilled spirits, putting it out of the reach of the poor on London’s streets. The gin distilleries continued to produce improved gin and London gin became recognized as some of the finest in the world. There was a resurgence of gin drinking in the 19th century, with London again at the heart of the business.