The Public Drinking Fountain Movement was a Victorian success story

Wealthy Victorians were preoccupied with cleanliness and the growing problem of public health. The population explosion in the large towns and cities brought with it unforeseen health and sanitation problems . The battle for sanitary reform was made by the humanitarians who fought reluctant local authorities to improve public health. The Victorian philanthropic reformers, saw the supply of public drinking water as a priority and quickly scooped up prominent supporters. With its modest objectives it became one of the success stories of Victorian London.

Victorian London had been visited by one cholera epidemic after another

This, along with the wider picture of sanitation reform, was just one aspect of the desire to provide fresh water for all upon the streets of London. The Great Stink of 1858, focused the minds of the politicians in a very direct way. Large resources, in terms of commissions and energy,  were rapidly allocated to the development of an adequate water supply system to London. The problems of sewage were being met head on by Joseph Bazalgette but clean drinking water was still difficult for the poor to secure. 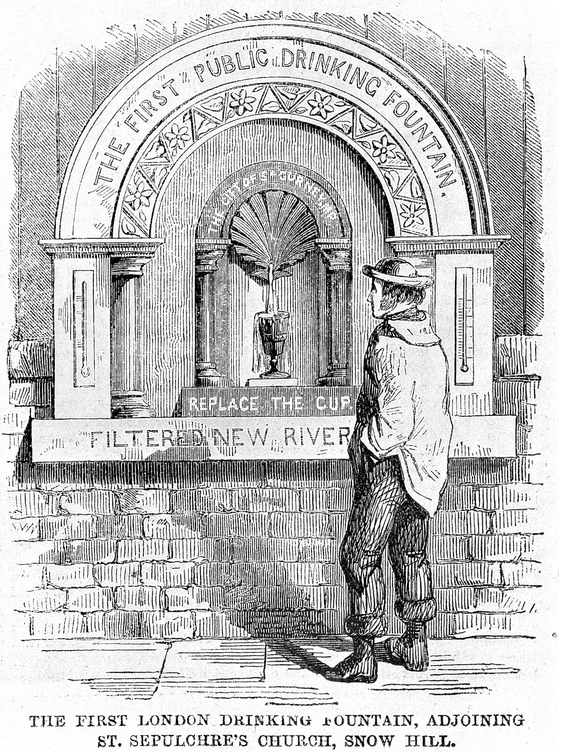 The first London Drinking Fountain was widely reported in the newspapers.

The London fountain movement was launched on 12th April 1859

It was largely the creation of Samuel Gurney and Edward Wakefield who hoped that the water they filtered would eventually be paid for by the local authorities. An association was formed, the ‘Metropolitan Free Drinking Fountain Association’, contributions were encouraged for the erection and maintenance of drinking fountains. Lord Shaftsbury was amongst its early supporters.

An appeal went out for the support of the Temperance Movement

The Association meant to provide an easily accessible alternative to alcoholic drink to the poor. The fountains were sometimes placed close to a popular public house. They also began to provide troughs for animals. Previously pub owners provided water troughs but bore painted reminders;

All that water horses here, must pay a penny or have some beer

The first fountain was opened on 21st April 1859 in a corner of Holy Sepulchre churchyard Snow Hill. 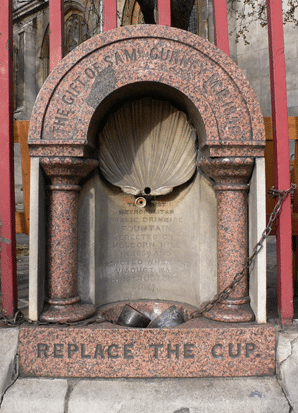 The Temperance Movement was a pervasive part of Victorian culture

The urban environment was increasingly seen as the source of many bad habits and traits in society. The countryside was idealized as a place of health and public virtue, free of the literal and implied ‘spirits’ that led urban communities astray. The development of public parks, bath houses and drinking fountains was a means of reconnecting the countryside to urban life. The squalid conditions of London’s poor, living around stinking courts, with alcohol the only escape, were as far from the ‘ideal state’, as it was possible to be. The call for public drinking fountains worked on many levels. The clean water would purge the poor of their sins. The fresh clear running water would drive out insobriety and offer  a chance for ‘spiritual clealiness’. It would also of course, provide the poor with clean water to drink. The fountains, not surprisingly, were often places close to churches and churchyards. 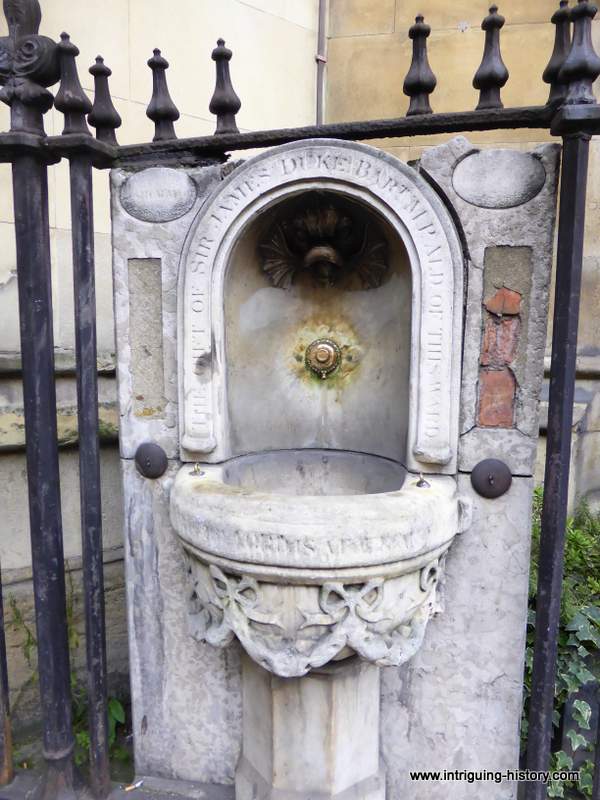 St Dunstans Fleet St with a drinking fountain attached to the rails.

The problem with the water supply companies was, that the water they supplied was not only inadequate but also largely polluted. The cholera epidemic caused an outcry for sewerage improvement, control of the companies and closure of contaminated wells. It was a complicated story of gradual advances, frustrated by legislation and argument. It wasn’t until the end of the 19th century when a Metropolis Water Act was finally passed, that progress began to be made. The problem therefore, facing the reformers, naturally fell into two parts, the provision of an adequate water supply and standards of purity. An inadequate supply meant that water was hoarded, increasing the chance of contamination. The daily grind of queuing at a stand pipe, when there was work to do meant many stored water. The water companies did not care about the end user and supply was intermittent at best. In 1866, Dr Henry Leatherby, minister of Health, recommended that none of the 35 pumps or 5 wells in the city be used for drinking. Where then, were the poor expected to get fresh water from?

Despite the support of a number of prominent men, Lord Russell, Lord Carlisle and even Prince Albert, the hoped for local authority money and support was not forthcoming. By 1861, eighty five fountains had been built but there was opposition from some authorities, not just on economic grounds but relating to seemingly spurious concerns, such as the obstruction to traffic.

At this point the Association broadened its appeal and created the animal troughs and changed their name to the ‘Metropolitan Drinking Fountain and Cattle Trough Association’. In doing this, they sucked in support from animal welfare groups including the all powerful RSPCA. 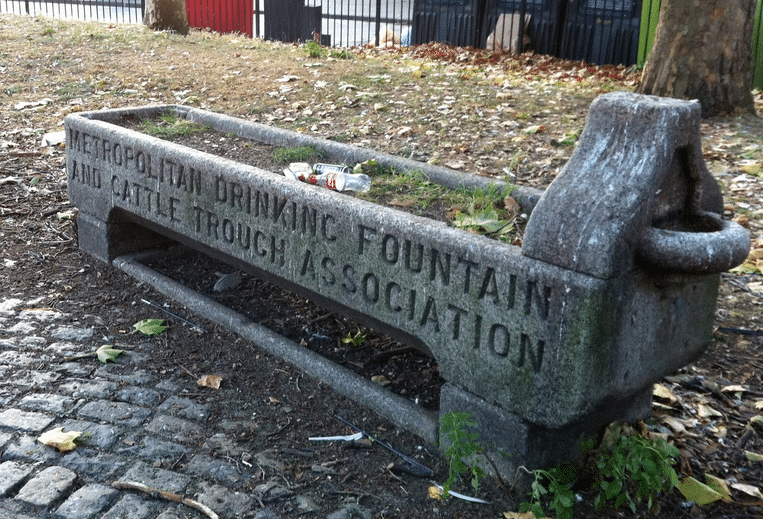 Many commissions were established to consider the sanitation and water supply issues in London but it all got into a terrible muddle. The companies still went unregulated and nothing could be decided upon. The Association however held on and things slowly started to improve. The gift of a fountain from Queen Victoria in 1876 helped improve matters.

To attract donors the Association allowed those who gave more than £25 to choose a site and design of the fountain. There were problems maintaining these more elaborate structures and they were sometimes sited for display rather than functionality. There was however another by product to providing clean water and that was to add an uplifting aesthetic design, to provide a point of beauty in an otherwise ugly world, which the poor inhabited. Women and children feature in many of the designs and inscriptions of a somewhat pious nature added. Many of them texts from the Bible.

Drinking Fountains were placed in many different places

Old markets such as Smithfield and Spitalfields had their fair share, along with the new railway stations. These were used by the working classes. Others in parks and squares, such as Berkeley and Portman Squares were more elaborate and served to remind those passing of the charity bestowed upon them. Interestingly they were on the street side of the rails, on the public side of the locked gates. An active street life by day and by night made use of these fountains. In 1888 Octavia Hill built a Red Cross Hall and garden in Southwark and of course, installed a drinking fountain.

Over time the fountains were damaged or fell into decay

Vandalism was common from the outset and the drinking fountains needed maintenance. Over time the need for the fountains diminished as the water supply to the citizens of London improved. It is difficult to imagine the impact of this movement amongst Londoners. The fountains lifted the lives of many and added design and colour in otherwise drab areas.