The Crystal Palace, an accolade to the Industrial Revolution

The Victorian age was a period of optimism and unlimited possibilities. The Industrial Revolution had assured Britain’s position in the centre of the world’s manufacturing stage and the husband of Queen Victoria, Prince Albert was to play a leading part bringing together manufacturing and imbuing it with style.

In 1847 he became President of the Society of Arts and played an important part in mounting a series of small manufacturing exhibitions to show off British products and style. It was perhaps though the vision of Henry Cole, a man who, in his role as Assistant Keeper of the Record Office was responsible for promoting these exhibitions. He was a man of many talents, a Painter, an author, architect, historian. He gazed upon all he saw and heard, with a critical and informed eye. He saw a possibility for Britain to stage an international exhibition of manufacturing, on a scale not realized before and it was this idea that gave birth to what, would become, the world’s largest greenhouse, the Crystal Palace. 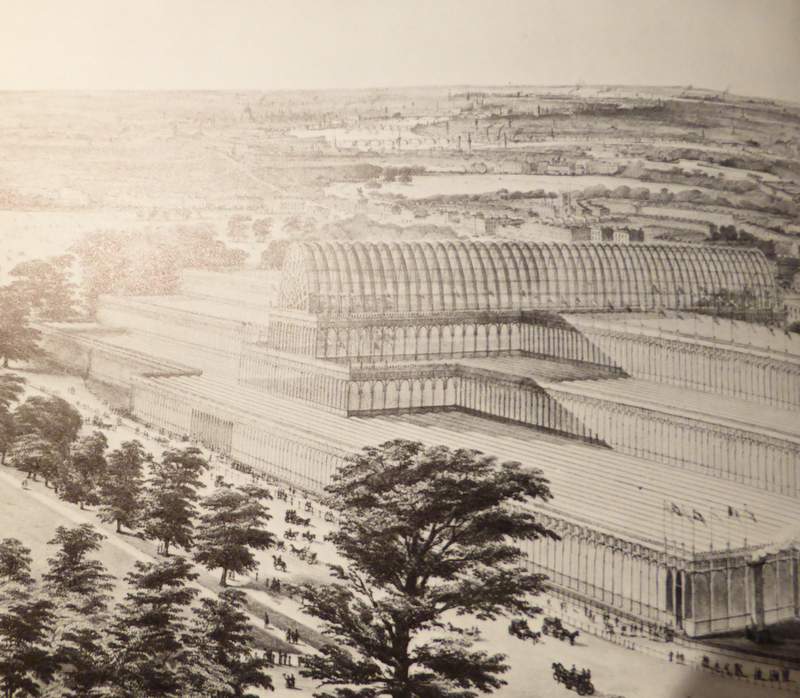 The Crystal Palace in Hyde Park

Amidst much opposition, it was decided that to hold an exhibition on the scale envisaged by Cole and the Prince, a site would have to carefully selected. Hyde Park seemed like an ideal solution. A building would then have to be designed that would be capable of housing the manufactured goods of the entire developed world. Money had to be raised, legislation enacted and all in a time frame of a mere eighteen months.

Was such a task possible? In Victorian Britain, the answer was yes. A Royal Commission was formed and money raised through public subscription. Everyone, from the richest in society to the poorest were invited to contribute. From great Mansion House dinners to collecting boxes on street corners the trickle of money became a flood and within one year, £79,000 had been raised underwritten by £250,000 of funds from manufacturers. The design of the building was tasked to great architects, including Donaldson and Barry and also to two of Britain’s finest engineers, Brunel and Stephenson. The submitted designs fell well short of expectations and it seemed as if the project was destined to falter before even getting off the ground.

Design by committee is doomed to failure, the building became a hybrid with no sense of singular purpose. With half, it seemed, of the world’s nations invited to the exhibition and with a year to go, the great exhibition still had no building designed to house it,  let alone be built. Was it possible that Britain would end up with egg on its face?

Then along came Joseph Paxton

Paxton was an architect who specialized in building in glass and iron. This self made, self taught man would create one of the world’s most spectacular buildings, the Crystal Palace. He started work as a gardener at Chiswick when he came to the notice of the Duke of Devonshire and he proceeded to become both manager of the Duke’s estates at Chatsworth and elsewhere and also his friend. He must have been an exceptional man. His interest in glass and iron buildings sprang from a plant cutting he obtained, of the giant waterlily, which he eventually succeeded in prompting to flourishing growth at Chatsworth. It soon outgrew its home and Paxton needed to build a structure to house it. He designed a wonderful greenhouse for it. You could say the seed of the idea for the Crystal Palace was planted there.

Paxton did not plan to submit a design for the exhibition building but a visit to London and his friend and MP John Ellis, made him aware of the problems the exhibition committee were facing. His mind began to fill with ideas and possibilities and he decided to submit a plan. He was given just two weeks to pull together the plan, with detailed drawings.

The plan for the Crystal Palace

Paxton’s first sketch was drawn in minutes and astonishingly it looks much as the finished structure did. It would resemble the lily house he designed and built at Chatsworth. Take a minute to think on this though. No such building of this scale, made of glass and iron had ever been built anywhere in the world before. It was a huge risk but the concept, spot on. The light airy structure could accommodate the terrain and trees of Hyde Park. The building could be taken down after the event and rebuilt somewhere else. It would be cheap and simple to erect. The fact that Paxton could turn to British manufactures of iron and glass to bring his design to life, in terms of the quality and quantity of goods is incredible. It was a feat of engineering and manufacturing know how on a scale difficult to imagine. Paxton’s design called for 205 miles of sash bars, 2150 iron girders, 3300 columns. 600,000 cubic feet of timber were needed and to create the sparkle, 900,000 square feet of glass. Quite staggering and the glass had to be transported from Birmingham to London. 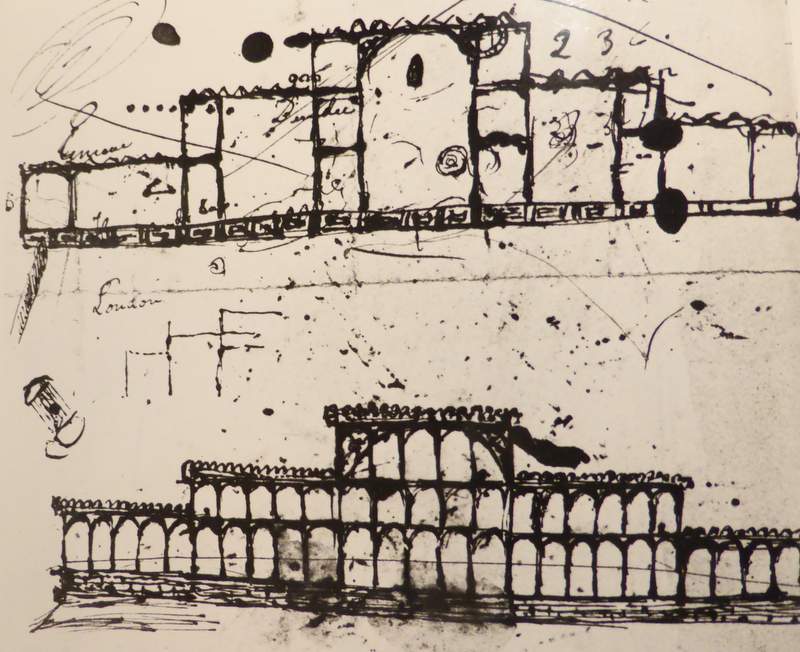 This vast building would cover nineteen acres of land and would enclose thirty three million cubic feet. This cathedral like structure consisted of a nave and transepts, along with galleries. Each piece of this giant ‘Meccano’ set had to be hauled into position using the power of men and horses, levers and pulleys. Great teams of men worked in unison to lift this building to its feet, two thousand on site at full steam. The glazing panels were moved to position using trolleys that ran along Paxton’s guttering pipes, all thirty four miles of them. The glaziers skilled work was followed by teams of painters. Behind them came the joiners, fixing the stalls for the fourteen thousand exhibitors. There were eleven miles of stalls. All this was accomplished in under nine months. 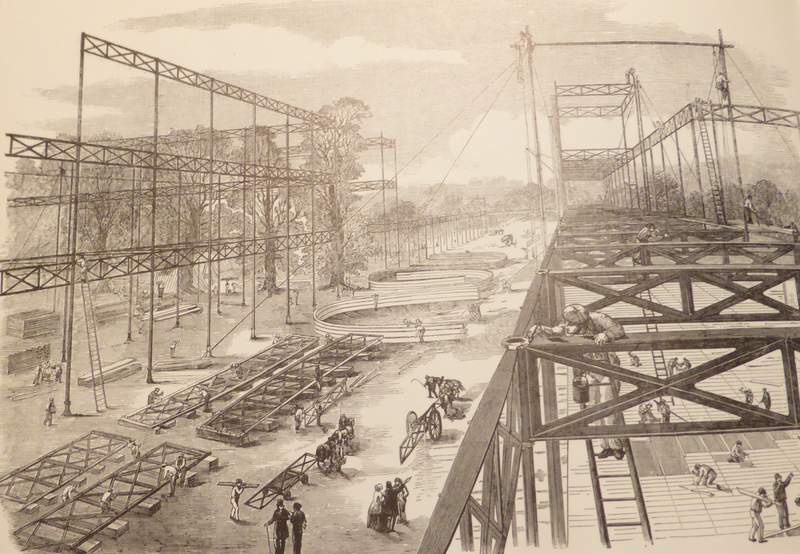 Brought down by sparrows

All was ready for the grand opening, with just weeks to go, the great Crystal Palace became home to a flock of London sparrows who enjoyed the balmy conditions inside amongst their favourite elm trees. It spelled disaster. No one wanted bird droppings all over the some of the world’s most beautiful artifacts. The problem of ousting them seemed unsolvable until Queen Victoria herself sent for the Iron Duke, the Duke of Wellington and he, ever pragmatic, suggested they install some sparrow hawks. The problem miraculously disappeared.

In 1851, over six million people filed through the great exhibition, What an incredible sight it must have been. If the exhibition itself did not meet its aims of increased trade, it brought together what would become a legacy of art and design to that part of London and it gave confidence to those with vision of what could be achieved.

What was to become of the Crystal Palace?

Hyde Park had to be returned to its status as a park, what then was to become of the giant structure? Paxton wanted the Palace to stay put, he could not bear the idea of his masterpiece coming down but he was thwarted by powers greater than he. Paxton was not without friends though and he raised over £500,000 to buy, move and expand the building on a site at Sydenham Hill, commanding amazing views of London. The Winter Palace as it was to become would house great art and exotic plants, temples, fountains. It would be the showcase for great civilizations, art and architecture. The three stories became five and the capacity half as much again as the original. Water towers, heating, landscaping and so much more meant the total spend reached several million pounds. Brunel the great engineer became involved. He built the water towers, each capable of holding 300,000 tons of water. The load meant the foundations had to be dug very deep and a platform of Portland cement laid down. These tanks supplied water for the fountains and integrated the pumping system needed. These in themselves an incredible feat of engineering.

The scale of this exhibition defies belief but like all overblown species, not terribly efficient or successful despite the visitor numbers of an average of two million each year for thirty years. Given the population of Britain at that time, this is a huge figure but still the Winter Palace required enormous expenditure in upkeep.

The End of the Crystal Palace

On the 1st December 1936, at six o’clock in the evening a faint red glow rose from inside the palace. A small fire that started in a toilet, had, within half an hour spread throughout the building, eating its way through the dry wood of the floors and walls. Panes of glass were blasted from the structure. Half of London’s fire engines turned out but nothing could be done to save the structure. Thousands gathered to see the sad spectacle of this most inventive of buildings, collapsing under its own weight. A nation mourned the loss of such a great building and all it stood for. Nothing like it has ever been built since, although many have tried to claim it. London’s Shard may be a twinkling delight but the Crystal Palace was so much more than a building, it once housed the identity of a nation. 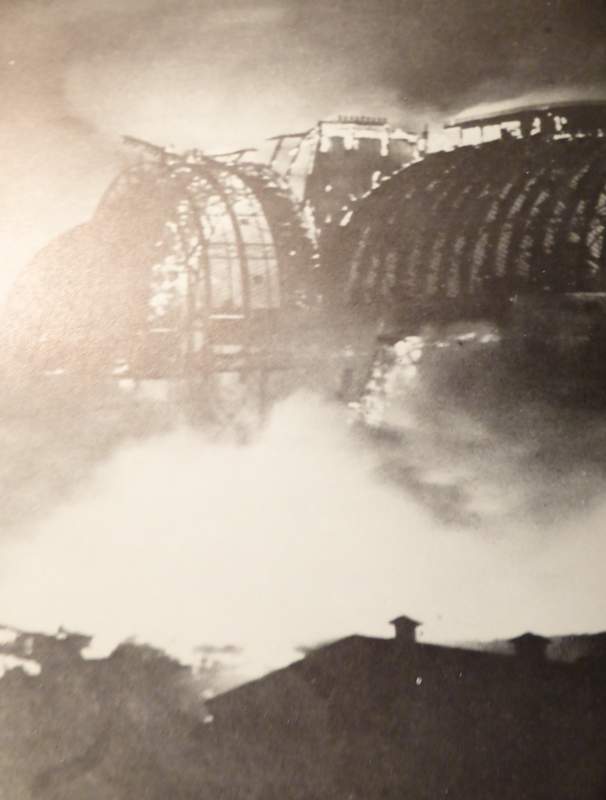 Crystal Palace Destroyed By Fire in 1936